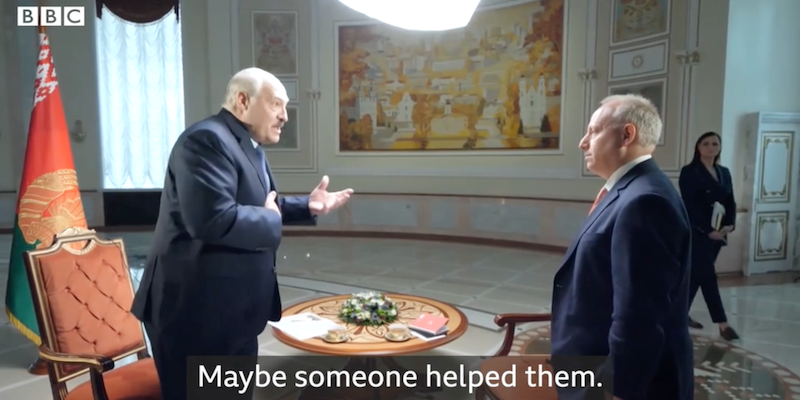 In a’interview with BBC the authoritarian president of Belarus Alexander Lukashenko said it was “entirely possible” that the Belarusian army helped groups of migrants cross the border into Poland. Instead, he denied having encouraged the migratory flow between the two countries, which the European Union and NATO accuse him of, according to which Lukashenko is attracting migrants to the border with Poland to create a humanitarian emergency situation and gain strength. contractual in the big diplomatic dispute between Belarus and the European institutions.

We are Slavs, we have a heart. Our soldiers know that the migrants are headed for Germany. Maybe someone helped them. I will not investigate this.

In recent months, tens of thousands of people from the Middle East have tried to reach the territory of the European Union via Belarus, because in the spring the Lukashenko government had simplified the bureaucratic procedures for issuing tourist visas in countries such as Iraq. effectively making travel to Western Europe easier. For Lukashenko it is a way to embarrass the countries of the European Union, which supported the Belarusian opposition and imposed economic sanctions. For its part, Poland, which is one of the most hostile European countries towards migrants, is refusing to accept them, imposing a state of emergency on its borders.

In recent days, the situation at the border has worsened, with the increase in the number of migrants stranded in the woods in the border area, in the cold and in extremely harsh conditions. According to human rights organizations, at least 10 people died.

On Wednesday, the Belarusian government had taken about a thousand migrants away from the border area, settling them in a covered logistics center near the border and giving them mattresses, blankets and food: according to several observers, the decision was made with the aim of reducing the tension. international. The first repatriation flights to Iraq in months had been organized on Thursday. On Friday, however, Poland accused Belarus of having led hundreds of people back to the border, forcing them to cross it illegally in the hours of darkness.

“I have told the European Union that I will not detain migrants at the border,” Lukashenko told BBC, “And if they keep coming I will not stop them because they are not headed to my country, they are coming to yours.” The Belarusian opposition, severely repressed by the president’s regime, criticized the BBC for having interviewed Lukashenko, “giving space to a dictator”: a “platform for telling lies and propaganda” in the words of Svetlana Tikhanovskaya who in the August elections was at the head of the opposition coalition and candidate for president.