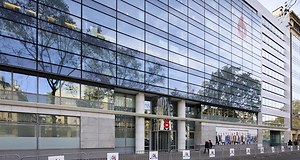 M6 published accounts on Thursday showing its efforts to optimize its profitability in a difficult sector context. In fact, its main revenue item, advertising generated by its television channels, fell 3.4% like-for-like in the fourth quarter due to strikes.

As a result, the Bertelsmann subsidiary could only stabilize this item over the year, still on a like-for-like basis, in a market which it estimates overall down by 1% in 2019.

However, the group increased its current operating profit on a like-for-like basis to 267 million, despite the termination of the M6 ​​mobile by Orange contract on June 30, 2019 and additional investments of 7 million in digital and in particular in Bedrock, its new subsidiary of services to streamers.

Two million additional results were notably generated in radio – the RTL division bought in 2017 – thanks to synergies with M6.

Operating margin “at the highest of 19 years”

The big operation of the year for M6 was l
acquisition of Lagardère youth channels (Gulli, etc.) for 215 million

” In the space of two years, we have added 47 million current operating income (30 million by RTL, 17 million for Gulli) for an acquisition cost of 440 million, welcomes Jérôme Lefébure, group financial director. The profitability of these two acquisitions greatly exceeds their financing costs “.

The audiovisual production pole that M6 would like to develop if the law allowed it more, generated 75.1 million in revenues, down slightly. But thanks to the success of films like “We will finish together” (2.8 million admissions), “Nicky Larson and the scent of Cupid” (1.7 million) or “Give me wings” (1.4 million ), current operating income was 14.8 million, up 6.2 million over one year. ” The amounts invested were lower and the number of entries higher Says Jérôme Lefébure.

Due to the capital gains from the sale of Girondins and MonAlbumPhoto in 2018, net profit for 2019 fell by 5% to 173 million euros. But on the stock market, after the dark year of 2018 for the entire sector, M6 has recovered well (an increase of 20% in 2019), “outperforming” its rival TF1. The group has chosen to maintain its dividend per share at one euro, a yield of 6%.