Macri and Nardelli in the port of Timbues, last year

“Dear Sergio, allow me to say ‘dear’ to you, even though there were not many times that we met. But in those times, and watching you act, I developed affection and respect for you “.

Thus begins the farewell letter sent from Europe by the former president Mauricio Macri to the family of Sergio Nardelli, the CEO of the Vicentin group who died last night at the age of 59 from a heart attack at his home in Avellaneda, the city of Santa Fe where the agro-export company was born 90 years ago.

From the pain I have, I want to promise you that Argentines will overcome this moment of confrontation and division and we will make you feel proud from where you are watching us (Macri)

“I wish I had more time for that to develop into a deep friendship. I want to say goodbye to a passionate person for doing, for undertaking, for generating opportunities for his family, his town and the beautiful community of Avellaneda and Reconquista; able to conquer the world without fear of innovating and developing new activities. Your family, your people are going to miss you, “said Macri in the letter read by a Nardelli daughter at her wake, as confirmed to this medium by the former president.

“Our country needs many with your entrepreneurial spirit to be able to get ahead. I know the sadness that overwhelmed you in the face of so many obstacles and especially so much aggression. From the pain I have, I want to promise you that we Argentines will overcome this moment of confrontation and division and we will make you feel proud from where you are watching us. A big hug and a huge affection to your whole family ”, ends the text signed by Macri. 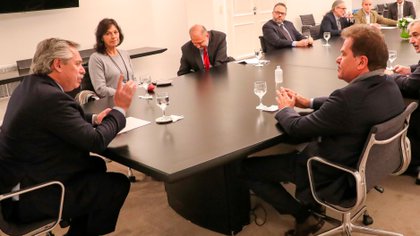 Alberto Fernández and Nadelli, during a meeting on June 11 in Olivos (EFE / PRESIDENCIA DE ARGENTINA)


Vicentin was in the eye of the storm in recent months after the Government of Alberto Fernandez announce the intention of the Government to intervene and expropriate the company, measures that finally did not happen after a wide rejection from various sectors of society, with mass marches included throughout the country.

In recent weeks, in the context of the call, several conciliation hearings were held between the company and the government of Santa Fe, from where they sought the formation of a triumvirate with the auditors appointed by the national government plus a provincial one. There was no agreement between the parties to set up a trust with the participation of both sectors, and the President annulled the Decree of Necessity and Urgency by which the Vicentin company intervened for 60 days.

Nardelli, who was known by the nickname “Mono”, was the son of a Vicentin and the grandson of one of the founders of the holding company. Although he did not speak during the conflict with the government, he was the visible face of the company that, strictly speaking, leads a board of directors made up mainly of family members and close friends. He led the visit to Quinta de Olivos to meet with Fernández, after the Government published the DNU of the intervention in which it was announced that the expropriation plan would be sent to Congress.

The situation of the company is very complicated: with strong financial liabilities, calling for creditors since February – which is being processed in the Reconquest Courts – and a debt of more than 1,000 million dollars.

Some years ago, Nardelli replaced Alberto Padoan, another member of the family, as head of the company. He was married and had four children.

Gustavo Nardelli, brother of the deceased businessman, is being investigated in the cause of the granting of credit lines to Vicentin by the Banco de la Nación Argentina.

The death of Nardelli: representatives of politics and the business world mourned the death of the CEO of Vicentin