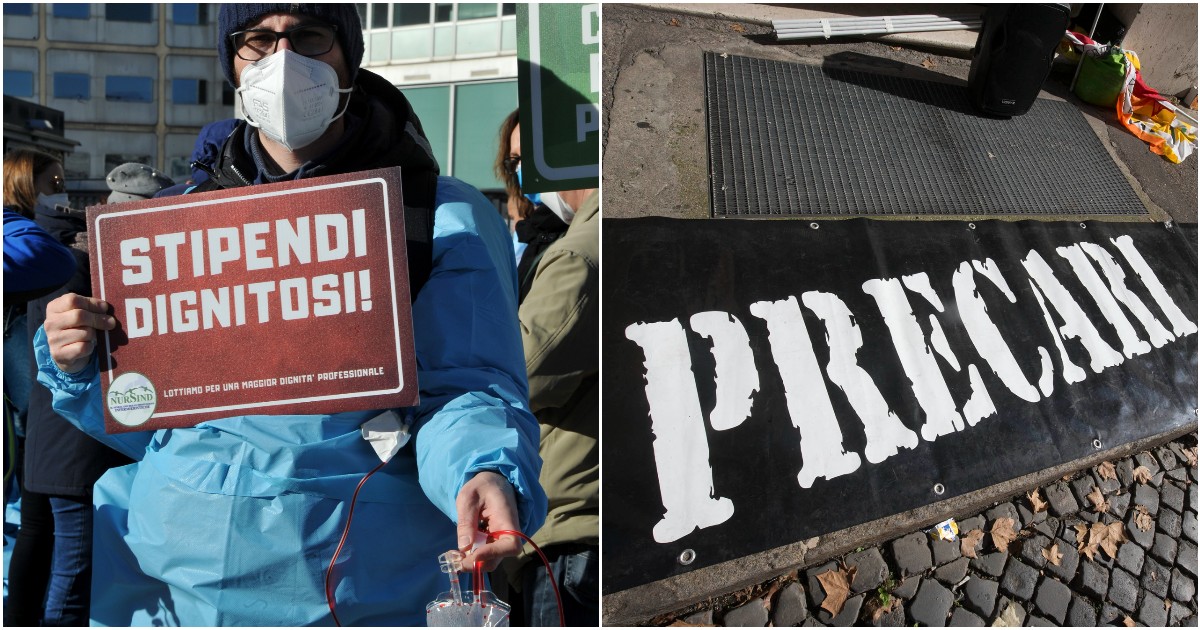 Less busy compared to two years ago. A record number of precarious. And more and more forward contracts short: those activated in the last part of 2021, before the war complicated the situation, in two cases out of three lasted less than six months and in one out of four cases less than a week. If last year the First of May it was in the name of hope in restart after Covid, it is now clear that the rebound in GDP has not brought quality employment with it. The recovery was stingy with the workerson which businesses have discharged the need to contain costs. And now inflation further reduces purchasing power from salaries already low. “Between 1990 and 2020 – let’s talk about three decades – i average salary in Italy they are even decreased, by 2.9%“, He recalls speaking with ilfattoquotidiano.it Stefano Scarpettadirector of the department work and social affairs of the OECD. According to the economist, it is now imperative that Rome introduce a salary legal minimum, which (as the experiences of all the States that have already adopted it show) does not reduce employment and in any case leaves ample room for collective bargaining. As for the request for Confindustria to reduce the tax wedge, welcome. But taxes on labor, he warns, must be cut by identifying other sources of revenue. Like an increase in inheritance tax and real estate tax.

The employed have not yet returned to pre-pandemic levels. And the data shows a progressive market slide towards precariousness, short contracts, involuntary part time …
The quality of jobs has deteriorated compared to the pre-crisis level. The hours worked are fewer and, in the face of the uncertainty about the recovery further increased by the war, employers tend to hire with fixed-term contracts, even short-term and in some cases part-time. However, this is part of a structural framework that has seen a significant growth in employment in the previous two decades but with average wages that have even decreased from 1990 to 2020. In Germany and France in the same period they are increased by more than 30%in the USA of 40%.

What are the causes?
There is a structural problem of anemic and dynamic growth of the labor productivity negative or flat: GDP per employee between 1990 and 2020 also remained almost unchanged, while elsewhere there was a significant increase. Unfortunately Italy is divided in two, a part of the country has productive activities competitive internationally they have succeeded in benefit from globalizationlong job chains and strong growth in some emerging markets but another part has suffered and has lost market share. Hence also the fact that while in other developed states the labor market tends to polarize between jobs that require “high” skills and jobs with low qualifications, in Italy we mainly create low skilled jobs. With the result that young graduates go abroad where they find better opportunities. It’s what I call a “low balance“. It all starts with education: low investments, a high share of young people who, according to the Pisa-Invalsi tests at 13-15 years old, are at a level of functional illiteracy, few graduates. This in turn reduces the ability to innovate, to make existing businesses more dynamic and to create innovative ones by rejuvenating the business class.

In this “low balance” and with inflation biting, in Italy arguing over how to raise salaries but the discussion on the legal minimum wage does not advance.
There would be a minimum wage absolutely needed. Unfortunately, on fundamental issues in Italy we are unable to go beyond the ideological debate: the discussion stopped at “yes or no” to the minimum wage instead of talking about what characteristics it must have, how to decide it, what impact it would have on the market. Obviously it must be fixed at a level reasonable: it must be a threshold under which no one can go down, even to give dignity at work. It is a simple tool that allows everyone to understand and express their rights, without having to untangle the many items on the paycheck. Almost all OECD and European countries have it, if we exclude the Nordic ones, which have a strong and effective character degree of coverage of collective bargaining. Even in Italy, in theory, collective agreements should cover everyone, but in reality we know that many workers earn less of the minimum foreseen by the contract because they work more hours of those declared or for other reasons (see the pirate contracts ed).

But is it true, as unions fear, that a statutory minimum would weaken bargaining?
The experience of other countries shows that this is not the case. It may be the other way around, that is, it may be the result of its weakening. Also in Germania there was resistance so, in 1997, it was decided to experiment with it only in the most problematic sectors such as construction to study its impact. It has been seen that, in addition to not have negative effects on employment, however, left room for collective bargaining. In 2015, also to respond to the problem of mini jobs poorly paid, it was introduced at the federal level setting it at 8,5 euro and over time it has risen to 12 euro. In any case, trade unions and businesses play an important role in deciding its evolution. After all, it is important to avoid that the instrument is “captured” by electoral reasonsthat a commission of experts with representatives of the social partners give at least some indications to the government on the minimum level and on the increases.

Is there a risk that it will reduce employment, as businesses claim?
There are many mechanisms that allow you to reconcile a minimum net pay for the worker with the containment the cost of labor borne by businesses. In Francewhere the minimum is decidedly generous compared to the median salary (it is higher than 60%) in order to avoid negative effects on the employability of low-skilled people, the state has decided to reduce social contributions for that audience. Obviously it is one political choice: it means that, to compensate, other categories of workers pay higher contributions.

Speaking of contributions: according to Confindustria, Italian employers cannot pay more, the state must intervene by cutting the tax wedge again.
Reducing the wedge is a fair goal, but with the pandemic the debt has increased a lot so it is not possible to do it without identifying alternative forms of revenue for the state. The cut must be part of a wider reorganization of the tax system: given that VAT is already high, in addition to strengthening the fight against tax evasion the OECD has repeatedly advised to finance the reduction of taxes on labor increasing the tax of succession (in Italy very low and with a high exemption threshold ed) e le property taxesalso by updating the cadastral values.

In the 2021 Report on Italy you asked for broaden the audience of beneficiaries of citizenship income. What is the opinion on the changes made by the government with the latest budget law, which they go in the opposite direction?
A premise: even on income, as on the minimum wage, in Italy there is a sterile discussion. Of a tool of fight against poverty there was an absolute need. As for the changes: measures of fight against abuse, now some access criteria that are too restrictive must be relaxed. Must do more to reach a higher altitude of people in poverty: 56% of the absolute poor according to the Istat definition do not receive it. I am thinking of the rule that requires non-EU citizens 10 years of residence in Italy: in almost all the other countries five are enough. The equivalence scale must then be modified by increasing the contribution for the large families and for categories more at risk of poverty such as single mothers. Some things have been done for incentivize job search, but it is one folly that still today in Italy whoever works for even one hour may lose the subsidy overnight. As also advocated by the Saraceno commission, an exit mechanism is needed gradual from the benefit, otherwise – given the level of wages – it is objectively difficult for a beneficiary to accept a job in sectors such as catering e le buildings.

According to critics, income is a “failure” because it is too few beneficiaries have found work.
First of all, it must be taken into account that among the beneficiaries there are many people who are very far from the market, unable to work or who need a lot of psychological support and training to get started. Then the active policies in Italy remain a lot deficit. Il Pnrr has deployed significant resources, but it is not just a question of money: the infrastructure of the employment centers. The skills are in the hands of Regions ma there must be national parameters and that the funds are not only distributed based on the number of potential users but also at performance of the service. And it is appropriate, even if some are against, to use private agencies more as do many countries including France. Many private operators have very good knowledge of the market and if they impose themselves very stringent conditions, also in this case linked to results (effective ability to find a job, duration of contracts, remuneration), can give important help. I doubt that by investing only in employment centers we can achieve results in the short term. In Italy there is still no one national database of places available: there are only regional ones that they do not communicate with each other. A folly. This is the minimum, it is the starting point.