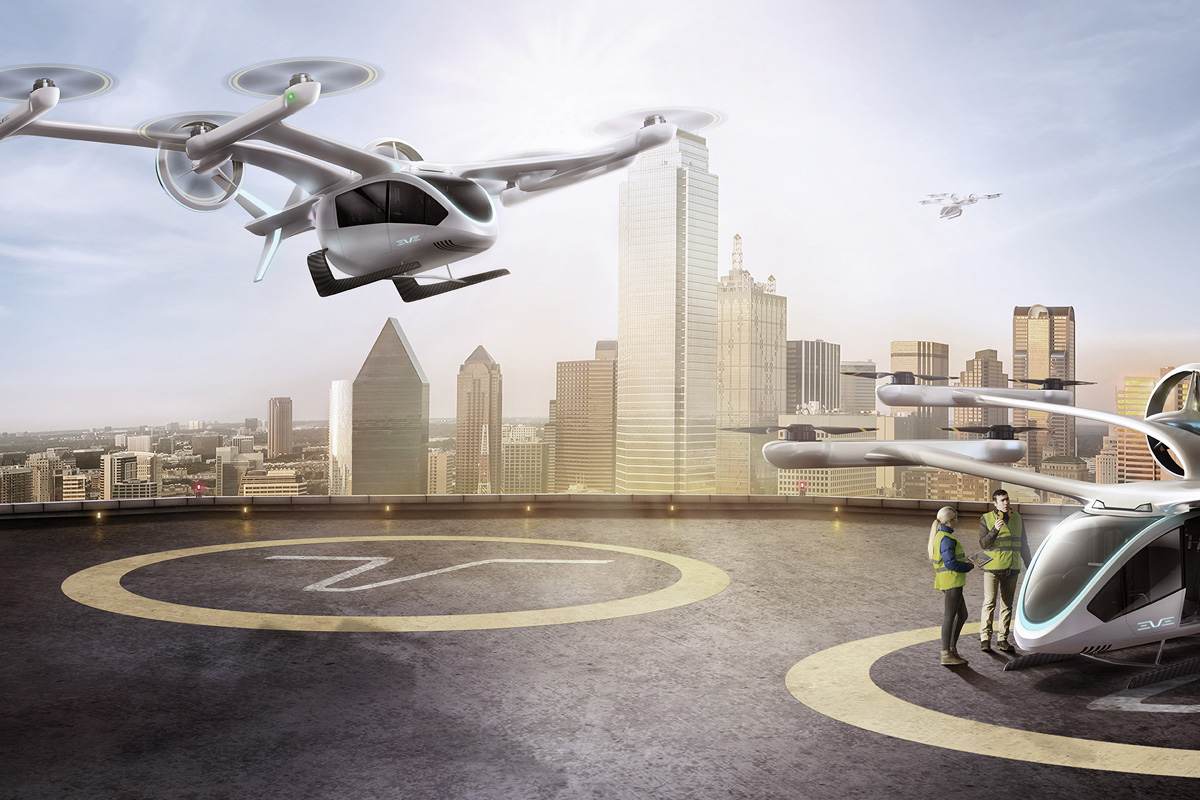 A was two “Flying cars” is close to starting, and the Embraer is one of the names that can help write this story. Or rather, the Eve Urban Air Mobility it is who will take over this new work front in the Brazilian aeronautical manufacturer’s business.

Eve is Embraer’s latest venture. THE subsidiary was launched in October 2020 by EmbraerX, a division of the Brazilian manufacturer focused on “disruptive innovation” projects, as it defines itself. The aim of the new company is to accelerate the creation of solutions to make the Urban Air Mobility (UAM) market a reality.

This means that Eve will participate in the development of all necessary steps to enable the UAM market. It is an action that includes the creation of service bases and support networks, passenger embarkation and disembarkation points in urban centers, adaptations in air traffic regulations and, of course, the production of eVTOLs (English acronym for vertical take-off and landing vehicles), aircraft that have been informally called “flying cars”.

“Some call it a flying car, but it’s not a car. It’s an aircraft. eVTOL is something that comes closest to a commercial aircraft. Another term that came up recently, and I particularly found it easier to pronounce in Portuguese, was EVA, from Eletric Vertical Aircraft”, said André Stein, CEO of Eve, in interview with CNN Brasil Business in July.

The first glimpse of Embraer’s eVTOL came in May 2018 during an air mobility conference hosted by Uber in Los Angeles, USA. In March of this year, with the project under Eve’s supervision, a small-scale, remotely controlled model of the aircraft completed its inaugural flight, at the company’s headquarters in Gavião Peixoto (SP).

It is an aircraft quite different from an airplane or a helicopter. Eve’s prototype, for example, has an exotic configuration with 10 electric propeller motors, eight of them for vertical lift and two for horizontal thrust. Later on, the design of the Brazilian eVTOL will be refined and prepared to accommodate up to four passengers.

The Urban Air Mobility market, for now, is just a public transport concept. The original idea was announced in 2016 by Uber, through the Uber Elevate initiative, in which it challenged the industry to develop new technologies to make the project feasible – which since last year has been managed by Joby Aviation, from the United States.

See also  vivo creates a 'smartphone' with a flying camera inside

Embraer (and later Eve) and several other aircraft, helicopter, and even automobile manufacturers took up Uber’s challenge and initiated various passenger eVTOL projects. The Brazilian company, however, found in this new niche a series of business opportunities that comprise the entire chain of technologies and infrastructure necessary for the introduction of the new mode of transport.

“When we talk about developing Urban Air Mobility, we are not just talking about designing a vehicle, but an entire ecosystem. There is much more to be done, and all these fronts must advance together, as an industry,” said Stein.

O eVTOL ecosystem can be as complex as that of commercial aviation. One of the questions is how the electric aircraft will be recharged. To advance on this front, Eve signed a partnership with EDP Brasil, a traditional company in the energy sector. The solutions to be developed include aircraft charging technology and equipment, more efficient electric batteries, business formats, energy management and supply, operational logistics and integration with the flight management and control system.

O eVTOLs traffic management is another hurdle, because in the future they will have autonomous controls. These vehicles will occupy a new airway, flying below helicopters and planes, so a series of changes in flight management and control regulations will be needed to allow these aircraft to enter. To develop this area, Eve works together with Atech, another subsidiary of the Embraer group, specialized in the development of systems and application of technologies.

As eVTOLs projects advance in flight testing, so are projects on the “vertiportos”, a kind of urban airport where landing and take-off vehicles will board and disembark passengers. In Eve’s case, she is working in partnership with Skyports, an airport infrastructure specialist, to implement UAM solutions in markets in Asia and the Americas.

For this to come true, Eve and her partners need to talk to the authorities. Embraer’s subsidiary, for example, has feasibility studies for eVTOLs (related services) with civil aviation regulatory agencies, such as Anac (National Civil Aviation Agency) in Brazil and the Civil Aviation Authority in the United Kingdom.

See also  what it is and how it works when driving

Traveling by air is not something that is available to everyone. eVTOLs, on the other hand, promise to usher in a new segment of affordable air transportation. But how?

O fuel price is one of the pillars in the composition of the value of an air ticket. Like the eVTOLs are electric, this bill will not be passed on to consumers. Going forward, with the switch from human pilots to the use of autonomous control, the operating cost of flying cars will decrease even further.

In addition, a survey conducted by Eve showed that 89% of consumers would use an air mobility vehicle if they could, 48% would do so every month, 28% said they would at least once a week, and 13% responded that they would fly almost all. the days.

In recent announcements about partnering with operators and ordering eVTOLs, Eve is betting that the entry into service of these vehicles should begin in 2026. “Delivering an airplane project on time or on budget is something rare in aviation, even in the traditional industry. Embraer, however, has managed to reach these milestones. We are confident with this deadline”, highlighted the company’s CEO in July.

Eve has five customers, including operators and sharing platforms, who have already committed to acquiring 435 eVTOLs. The biggest order to date has come from Halo, a helicopter operator based in the United States and the United Kingdom, which has ordered 200 aircraft with deliveries starting in 2026.

Another US-based company, Blade made a different deal with the Brazilian manufacturer. Instead of buying the aircraft, the company plans to hire up to 60,000 flight hours of eVTOLs per year, starting in 2026. Eve estimates that at least one vehicle is needed to fulfill every thousand flight hours contracted. Therefore, the American company must work with a fleet of up to 60 aircraft.

On the other side of the world, the Ascent air mobility startup from Singapore, also preferred to purchase the uptime of Eve’s eVTOLs, up to 100,000 flight hours per year. The Asian company’s plan is to offer urban air transport service in Bangkok (Thailand), Manila (Philippines), Melbourne (Australia), Tokyo (Japan) and the city-state of Singapore.

Finally, the other two confirmed Eve customers are Brazilian companies. The first to announce an agreement with the Embraer subsidiary was Helisul, a helicopter operator based in 14 states in Brazil, with an order for 50 aircraft.

Then came the confirmation of the Flapper, a shared flights company, which plans to contract up to 25,000 flight hours a year and offer the service in São Paulo, Rio de Janeiro, Santiago de Chile (Chile), Bogota (Colombia) and Mexico City (Mexico). Both will receive the first eVTOLs in 2026.

Eve’s CEO predicts that the global urban air mobility market will absorb around 50,000 eVTOLs in 15 years. “This means that we will have a volume of deliveries never seen before in aviation. There is a potential for selling a few thousand units per year. In São Paulo alone, at least 400 eVTOLs will be needed.”

How much do you know about older airlines? test your knowledge

In what year was Varig founded?

To which airline was Varig sold?

Which airport was known as “Vasp field”?

In which year did Vasp stop flying?

Cruzeiro was one of the most important Brazilian airlines. In 1975, who was it sold to?

Which of these airlines existed?

When did Transbrasil stop operating in the country?

Which of these companies was nationalized by the government of São Paulo?

Transbrasil was originally created in 1955 by what name?

Which airline received the 1979 award for best in-flight service in the world by the American magazine “Air Transport World”?

It lacked a little memory, but don’t be discouraged. try the test again

Almost there! I can see that you remember Brazilian airlines

Congratulations! You know all about the old Brazilian airlines