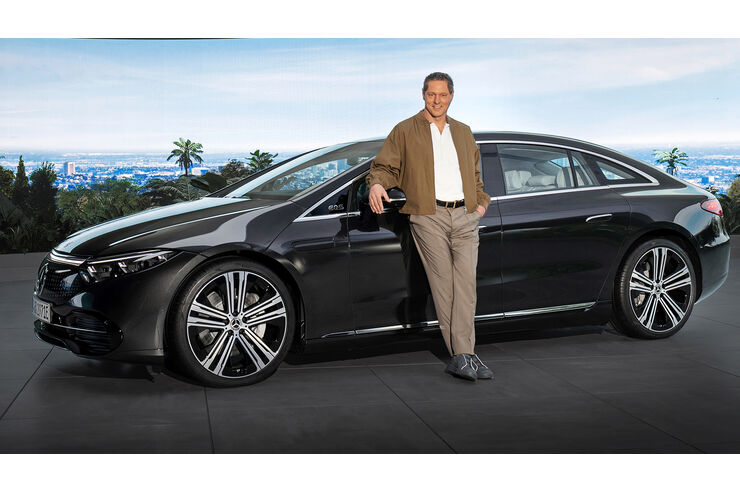 The transformation to electromobility also poses major challenges for car designers. Mercedes design boss Gorden Wagener has his very own view of e-car design and believes that the decade-old three-box design of sedans is over.

E-car designers should actually be happy: No more annoying cardan humps in the interior, no giant combustion engine with all the nonsense of ancillary components under the bonnet, only small e-machines, no tank, no cooler, no large gearbox. This allows long wheelbases and small overhangs; electric cars need large wheels anyway. It would all be so nice if it weren’t for those damn batteries that take up far too much space in the underbody. No wonder that in the beginning mainly long-legged and tall SUVs and crossovers with pure electric drive were at the start.

But gradually the electric drives are also spreading in other classes and threatening the classic sedan design. For decades it has been the staple food in the automotive world, following a design feature of the Studebaker Champion developed by Raymond Loewy since 1947: the three-box design, consisting of the trinity hood, passenger compartment and trunk.

The really best electric car in the world!

In an interview with “Top Gear”, Wagener explains, “Electrification will kill the three-box design of sedans, for various reasons”. On the one hand there is the aerodynamics, which is important for the range. Good results can be achieved with the classic layout; not least at Mercedes The last record holders for the Cd value were four-door coupés (CLA) or sedans (A-Class sedan) with notchbacks. The EQS with its stubby tail is its even better successor.

Why air resistance is important in electric cars

But: “With a 15 centimeter high battery pack, a sedan just doesn’t look good, it looks like shit,” said Daimler’s chief designer literally. In the English interview he is quoted as “s …”. So, according to Wagener, you have to do something to “digest” the altitude visually. Regarding the Mercedes EQS as the electric version of the S-Class and EQE (see photo show) as the electric E-Class, both classic sedan models, “this bold design has been thought up because it looks stretched and stylish”.

A sports car is so easy to draw

Even if Mercedes coined this three-box design with its sedans for many years, Wagener “doesn’t really mourn” the loss. Such a sedan is the most difficult car to design. “A beautiful sports car is so easy!”

And because electrification is changing the proportions of cars, you have to make sure that not all models look the same. “But this fear has existed for 30 years. We managed to make it look different in the past and I am confident that we will continue to do so in the future,” said Wagener.

Mercedes EQS and S-Class in comparison (2021)

So in view of the importance of the car in society, cars will have to be less aggressive and less intrusive in the future, asks Top Gear? “We have been asking ourselves this question for 20 years. In the end, it makes a big difference how good or bad the design is.” The grille on electric cars is disappearing, “all these new start-ups no longer have a grill, they have faceless front ends. They are a little anonymous and all look very similar. But do they look aggressive? No, they look like a supercomputer on wheels, “explains the design boss. “Perhaps a car has to look like a computer and less like an aggressive animal” if driving is regulated and the car becomes the driver. However, Wagener limits: an electric car also needs edges and a certain physiognomy to make it look like humans. “That doesn’t change”. And yes, “we are moving away from aggressive design”.

Yes, there is nothing more beautiful

No, you have to keep up with the times!

Mercedes design boss Gorden Wagener speaks plainly: The three-box design of the sedan, which has been known for decades, is dead from his point of view with the introduction of electromobility. The high-build batteries would change the design for the worse and classic sedans look correspondingly lousy permit.