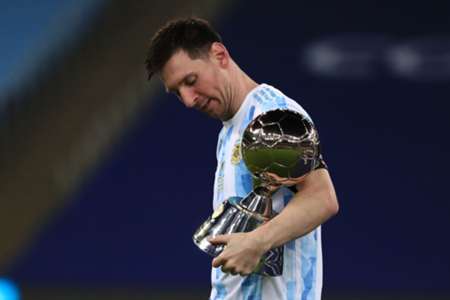 The player arrived in Barcelona yesterday, amid speculation about his presence there to discuss signing a new contract with the Catalan club, but this is not the case.

How does Messi spend the rest period?

The newspaper “Mundo Deportivo” indicated that Messi boarded a plane in the morning with his family, accompanied by his friend Luis Suarez, the former Barcelona star.

And so, the Argentine star continued his period of rest after winning the Copa America with his country, as he spent a few days in Miami and the Dominican Republic.

In the event that Messi signs a new contract, he will join the team’s training on Monday 2 August in preparation for the next season.

Some reports had confirmed Barcelona’s agreement to renew Messi’s contract for five seasons, pending the resolution of the financial crisis to ratify the contracts.

What does Laporta do to renew Messi’s contract?

In a related context, Mundo Deportivo confirmed that Barcelona President Joan Laporta will not travel with the team in the two friendlies in Stuttgart and Salzburg next week, to work on some important files.

Laporta considers the settlement of Messi’s renewal file a major priority for him in the coming period, as he is the most important link in coach Ronald Koeman’s team.

Barcelona recently entered into a dialogue with the Spanish League to reach an agreement to solve the financial crisis, with Messi cutting his salary by 50% to facilitate the process.

The Catalan club is awaiting the position of Javier Tebas, president of the association, regarding Messi’s registration, in a way that suits the club’s financial situation.

For his part, Laporta takes the situation personally, so he refused to leave Barcelona now, to work on Messi’s file, as well as the issue of renewal for Elas Moriba.