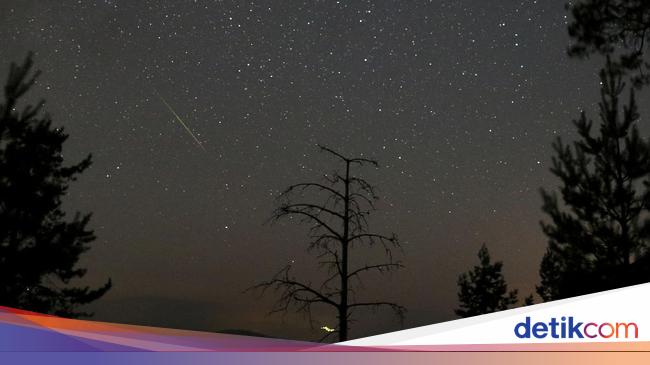 Summarizing the website of the Institute of Aeronautics and Space (LAPAN), the following are astronomical phenomena that will occur in 2022.

The first phenomenon occurred at the beginning of the year on January 4, 2022. The Quadrantid meteor shower is made up of debris from asteroid 2003 EH1 and comet C/1490 Y1.

Reported by the Space Science Center (Pussainsa) LAPAN, without moonlight, this phenomenon can be seen when the sky is clear and free of light pollution and the field is free of obstacles.

2. The Summit of Mars and Saturn

Wake up at the beginning of Ramadan 1443 Hijri on April 5, you can see the peak of the conjunction of Mars and Saturn. This phenomenon appears in the east at 03.00 am local time until 25 minutes before sunrise.

3. The meeting of Saturn, Mars, Venus, Jupiter, and the Moon

This phenomenon called quintet conjunction can be seen in the east at 04.00 am local time (except the 29th which was only seen 75 minutes before sunrise).

4. Peak Conjunction of Venus and Jupiter

On May 1, 2022, you can also see the peak of the conjunction between Venus and Jupiter which is only 14 arc minutes (0.2°) apart. You can witness this phenomenon at 03.30 in the morning local time until 25 minutes before sunrise.

On May 27, 2022 the Moon will be slightly obstructed by Venus. This phenomenon is called the occultation of Venus. At that time, the Moon was in the Late Crescent phase with an illumination of 10.3-10.6 percent.

In Indonesia, Venus occultation occurs in the morning to noon. Therefore, a tool is needed to see this celestial phenomenon. The phenomenon can be seen since 9 am local time.

The Venus occultation phenomenon was previously seen in June 2011 and 2017. Don’t miss it, Pussainsa LAPAN said that this celestial phenomenon will only return in September 2026 and May 2039.

June 14-15 and July 13-14 2022 is also known as the Perigee Full Moon. In this phase, the Moon experiences a Full phase and is also closest to Earth (Perige) at the same time.

This Super Full Moon can be seen before the sun sets until after the sun rises in the southeast to southwest direction.

Pussainsa LAPAN noted that the peak of the Super Full Moon occurred on June 14 at 06.51 p.m. local time and July 14 at 01.37 p.m. local time. This phenomenon occurs at least once a year.

Because it is visible from before until after the sun rises, you need a tool to witness it.

On August 13-14, the Perseid meteor shower will be at its peak. At that time, this meteor shower fell with an intensity of 100 meteors/hour and came from the dust residue of comet 109P/Swift-Tuttle.

Although slightly blocked by moonlight, the Perseid meteor shower can still be seen with the naked eye. Make sure the sky is clear, light pollution free, and the field of view is free from obstructions.

According to Pussainsa LAPAN, most parts of Indonesia will be able to see this phenomenon during the initial partial eclipse to the end of the penumbra.

This phenomenon can be seen in the Northeast direction at 20.30 to Northwest 25 minutes before sunrise. Down with an intensity of 120 meteors / hour, this intensity varies in the area of ​​Sabang and Rote Island.

Despite the moonlight, the peak of the Geminid meteor shower can be seen with the naked eye. Just make sure the sky is clear, light pollution free, and the field of view is free from obstructions.

That’s the list astronomical phenomenon 2022 from meteor showers to total lunar eclipses. Make sure to note the time so you don’t miss it, detikers!