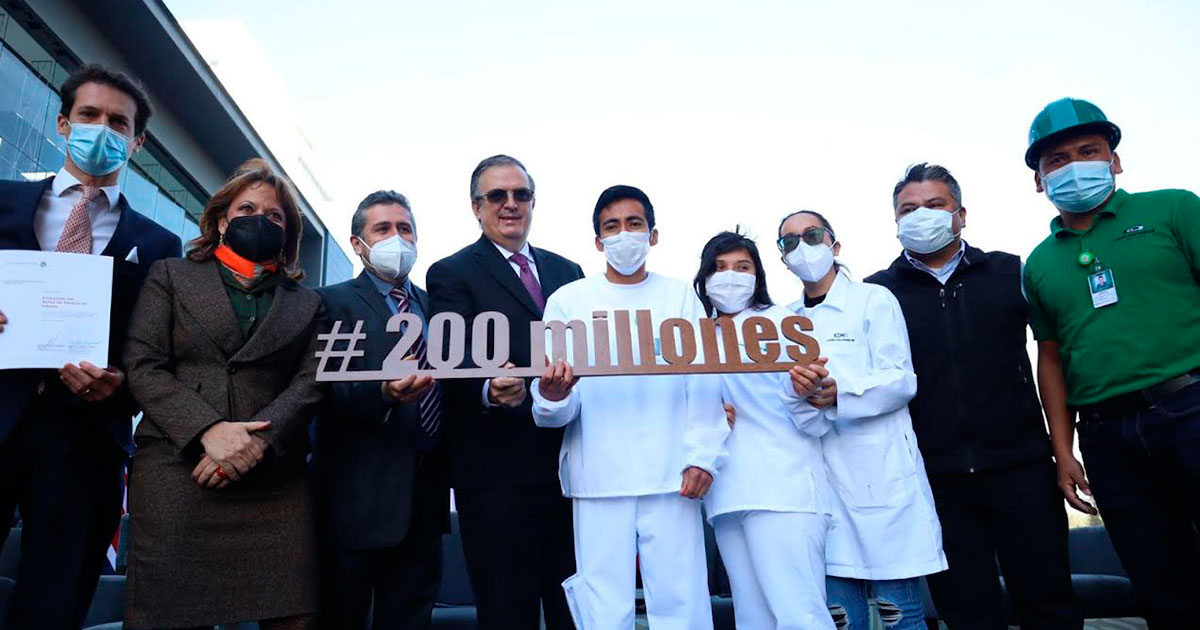 One year after the supply of vaccines against covid-19, The Secretary of Foreign Affairs, Marcelo Ebrard Casaubon, led the event in recognition of the various entities that made it possible, including the laboratories that collaborated with Mexico for its supply and packaging, as well as the countries that supported efforts to achieve the agreements and reach 200 million vaccines before the end of the year.

During the event, the Foreign Minister recalled that “it was very difficult for us to have the number of necessary vaccines in a timely manner to prevent the spread of the pandemic in Mexico. Well, it was possible to achieve with the combination of many efforts, today what we commemorate is that, a year of work ”.

In this sense, the countries and allies that in one way or another collaborated so that the doses required for immunize the Mexican population.

“Yes, we can do things, we do have a greater execution capacity than we sometimes suppose, and keep in mind the lessons for what follows. Ómicron is a risk, especially in contagion ”, declared Secretary Ebrard.

Have more confidence in ourselves: yes, it was the first country in Latin America. Yes, we are almost at 90 percent. We have to improve many things, but we are a successful country and we have to accept it”. “Simply: yes it was possible, yes it was achieved, thank you very much to all the people who made it possible”, emphasized the foreign minister.

As of January 1 and a year after the first covid-19 vaccines arrived in Mexico, the Foreign Ministry’s mission to supply them ends.

The event was attended by other officials who collaborated to achieve the goal of 200 million vaccines supplied, which we will reach soon. Among them, the Undersecretary for Multilateral Affairs and Human Rights of the SRE, Martha Delgado Peralta; the CEO of AstraZeneca for Mexico, Julio Ordaz; and Pfizer’s Senior Director of Government Liaison, Lizeth de la Torre.

Messages from Yu Xuefeng, CEO of CanSino, and Gao Xiang, Vice President of Sinovac, who expressed their gratitude to the Government of Mexico for having been able to collaborate with their antigens in the battle against COVID-19 in our country, were also screened.

Congratulations to AstraZeneca, mAbxience and Liomont for the recognition granted by the WHO to their vaccine manufactured in Mexico and Argentina. It is recognized all over the world, bravo!!!! Thank you Fundación Slim for your support to make it possible.

For her part, Undersecretary Martha Delgado expressed: “I want to thank the professionalism, seriousness and commitment of the pharmaceutical companies with which Mexico has had contact. With your support, we have successfully concluded three contracts: AstraZeneca, CanSino and Sinovac. Now that we are about to reach 200 million doses, one year after the first delivery, it is up to the Ministry of Health in 2022 to make use of all the tools that we have put in place and continue to strengthen the national response against covid-19.”