Microsoft To Do and Apple Reminders: two free apps facing each other

Both apps are cross-platform

Finding Apple Reminders is as simple as unlocking the iPhone, as it is a native system application. If you deleted it, either on purpose or by mistake, you can find it again in the App Store for free. In the case of Microsoft To Do we will not find it installed as standard in the system, but it will not be difficult to find it in the application store at the same cost: 0 euros.

The main advantage that the two applications share is being cross-platform. In the ecosystem of apple products it is possible to find them both on iPhone, iPad and iPod touch as well as on Mac computers. On Android and Windows, however, we can only find Microsoft’s. However, it must be said that through the iCloud website it is possible to access Apple’s reminders, although it is obviously not the same experience as having a dedicated application.

In any case, in this comparison we will stick to the respective iOS applications, since we believe that if you have an iPhone, that is probably where you are most interested in knowing how these apps work. We also insist that they are completely free and that they do not even include in-app purchases with which to obtain more powerful functionalities.

Minimalist interfaces, but with some buts 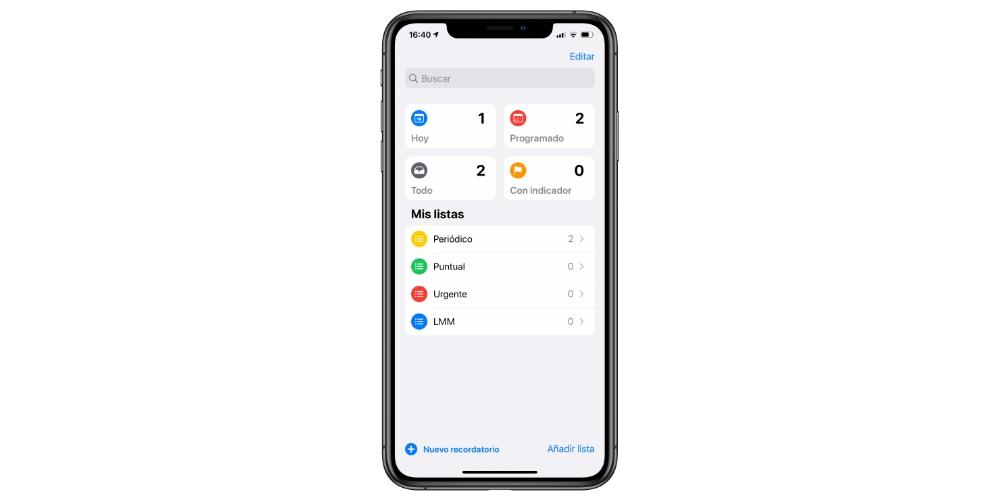 The Reminders app is really visually simple. In this sense, the same line is followed as in the rest of the native iPhone applications, although it should be noted that since iOS 13 it incorporates a much more attractive design than in the past, so this places it to a new level. Despite the fact that in this sense we tend to be subjectivity and each one will think in a certain way, for practical purposes it can be said that it is an intuitive application because at a glance you can already observe everything it offers, having the viewing options within easy reach lists, reminders or add new ones. 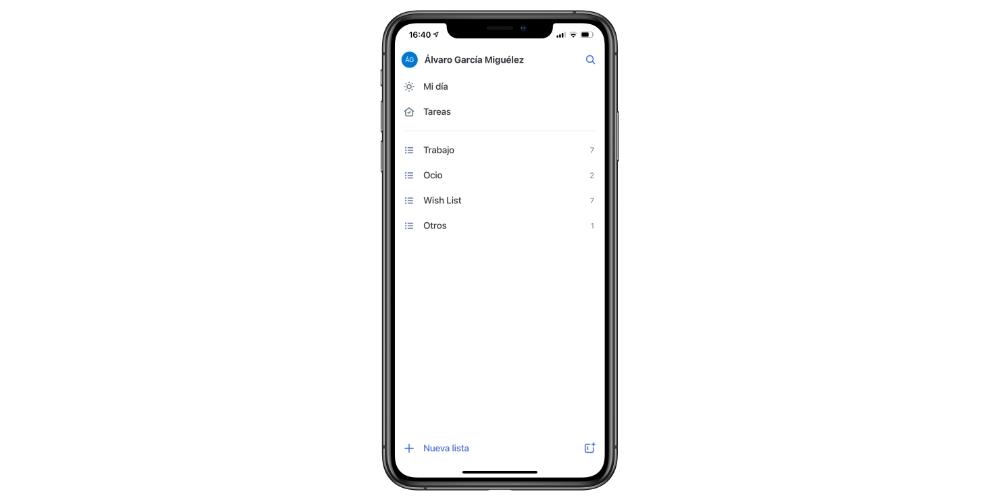 As far as Microsoft To Do is concerned, we find another simple interface that also has everything within reach, although in its case in the form of a list instead of a grid, which can also be very interesting. Something to highlight about this unlike Apple is the possibility of finding settings that allow you to configure aspects such as the creation of smart lists, view of those reminders that you consider important and even the possibility of connecting with email accounts. It is also possible to set different themes for each list, being able to have different background colors or even photographs predefined by the app.

Notably both support dark mode, a form of display that came to iPhones with iOS 13 and which many users enjoy, so it is very relevant to know that in both cases we will find appearances adapted to the mode that is activated in the system.

Regardless of the appearance they have, every task and reminder app has to shine especially for these functions. First of all, it must be said that there are other applications in the App Store with more advanced functions for this, but since we are analyzing these two free apps we would like to focus on what they can do so that you can know whether or not they can be more than enough for you. use.

It is really easy to add reminders, precisely by clicking on the “New reminder” button that you have at the bottom left as soon as you enter. When we try to add one we find two fields, one for the title and another for notes that can serve as a description. In details we find the possibility of adding the date and time of the reminder, as well as an interesting possibility of which location that allows the reminder jump when we are in a certain place. This is useful in many situations, for example, going to the supermarket and once we are there we are reminded to buy a certain product.

To this last option, another similar possibility is added that makes the reminder go out when let’s send a message to a certain contact. Let’s imagine that we want to propose a plan to a friend and it is a bad time to write to him, because we can add a reminder so that when we are talking with this person he will remind us. Of course, it is an option that perhaps would be better exploited if it were integrated with third-party applications, since the use of the Messages app is really not popular compared to other services.

And when it comes to creating lists, the truth is that it is all just as intuitive. We can create as many lists as we want to have our reminders sorted by different categories. And as far as list differentiation is concerned, we can find that, in addition to the name, it is possible to choose a color and an icon that represents said list so that we can recognize it at a glance. 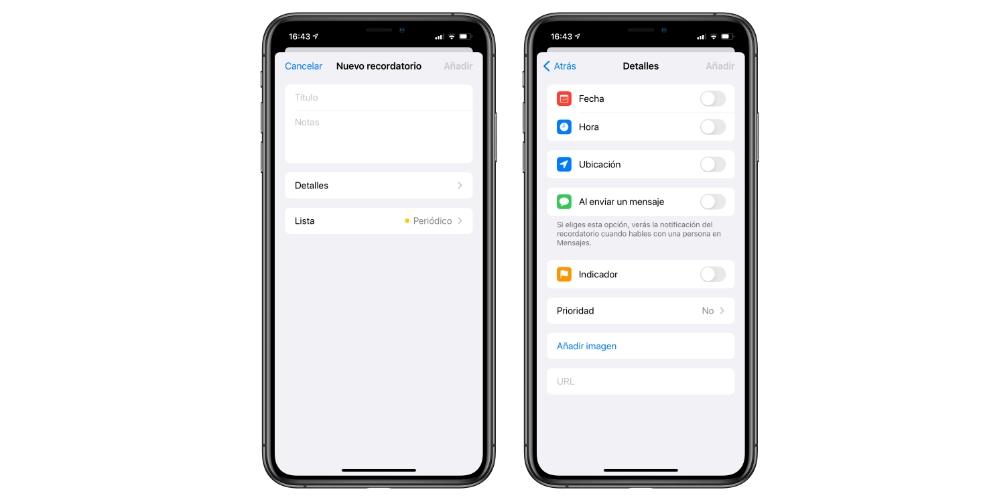 It could be an application more than enough to add reminders, but if what you want is to combine it with lists without any warning, it is already complicated. It is not that you cannot, because it would be enough to remove the date and time, but it is much less practical than in Microsoft To Do as we will see below.

By default we find two main lists: My day and Chores. In the first one, we can add tasks from any list and which will have to have a marked date, so that only the reminders and tasks that we have pending for that date appear there. In Tasks what we find precisely that, all the tasks (and reminders) that we have pending or have already finished, being able to mark them for that purpose.

The creation of lists in To Do is not complicated, but it is true that it looks much less aesthetically than the Apple application. However, this one is more focused on undated tasks and even lists. When adding a note we have to scroll to the list we want and go to the bottom, being able to add the task in a few seconds by simply adding the title. If we also want to add more options, we can do so by touching the sun icon to add it to “My day”, with the bell to choose the notice at a certain date and time and with the calendar to add its expiration date. Once added it will be possible to add a description, an attachment and even set the repetition.

However, there is a problem that, unless it is added with a future update, now it is not possible to establish. If a repeating task is added every day of the week or on several days of the week, it is not possible to add it to the “My Day” list on a regular basis. The moment it is added you can have it that day, but once completed it will be on its respective list again and you would have to go every day to that specific place to add it. This detracts from productivity due to the fact that in the end this “My Day” function is impractical. 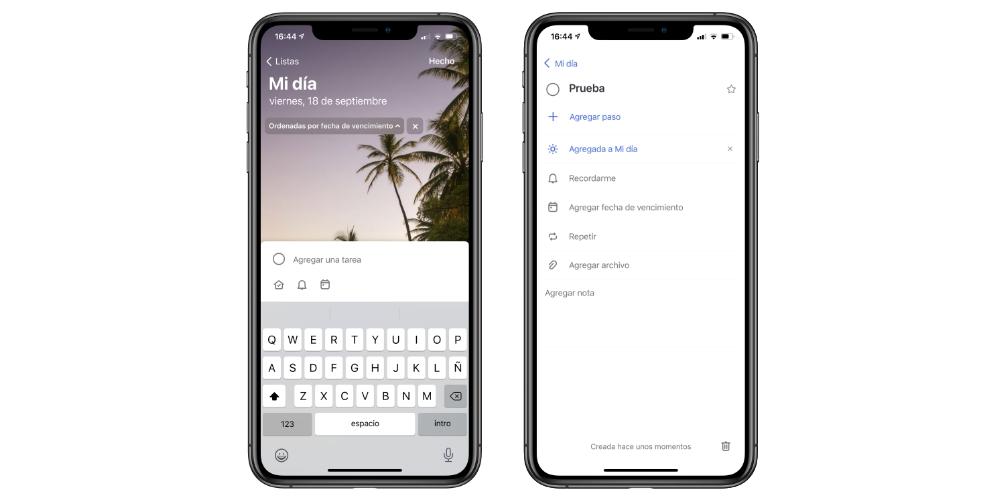 They sync with iCloud

Today it is essential that applications are synchronized with cloud services, be it iCloud or any other system. This not only ensures that tasks, reminders, lists and everything we have in the apps are not deleted, but it also allows them to be accessible from any device. In this case, both are with iCloud and if you have a good internet connection you will see that the synchronization is really fast, since it is being done Real time.

Ease and price, main reasons for use

As we said in another section, in the end there are many much more powerful task and reminder apps in the App Store. However, these stand out for being 100% free and for being extremely easy to use. If in its day you used Wunderlist It is also likely that Microsoft To Do sounds familiar to you, since it is the heir to it. And the Reminders app, despite its changes in these years, maintains the same essence as always and if you are used to dealing with apps from the apple ecosystem it is very likely that it will end up being your favorite.

The province reported that today there were other eight people died of covid-19 and 189...
Read more

NBA The Argentine could be in the NBA DraftLeandro Bolmaro, in a Barcelona match Francesc AdelantadoFAcundo Campazzo is the name...
Read more

Ashley Tisdale revealed why she had to remove breast implants

In what she called her "most personal post," Ashley Tisdale revealed that she had her breast implants removed last...
Read more

Today Maipú starts Phase 3: What does it mean?

As previously announced, Maipú went on Monday to the next stage of the Step by Step Plan implemented by...
Read more

The 128 GB iPhone XR is much cheaper in Amazon than in the Apple Store with this offer: 589 euros

The iPhone 12 is already a reality,...
Read more
Technology

The Epic Games Store welcomes the arrival of a...
Read more
Technology

How long the period of exclusivity of some of the PS5 takes-games?

How long the Exclusive agreement for the PlayStation 5 take actually? In the worst...
Read more

Isolation from coronavirus is now or never: López-Gatell

Staying at home en masse is the last opportunity that Mexico has to reduce...
Read more
Archynewsyarchynewsy.com