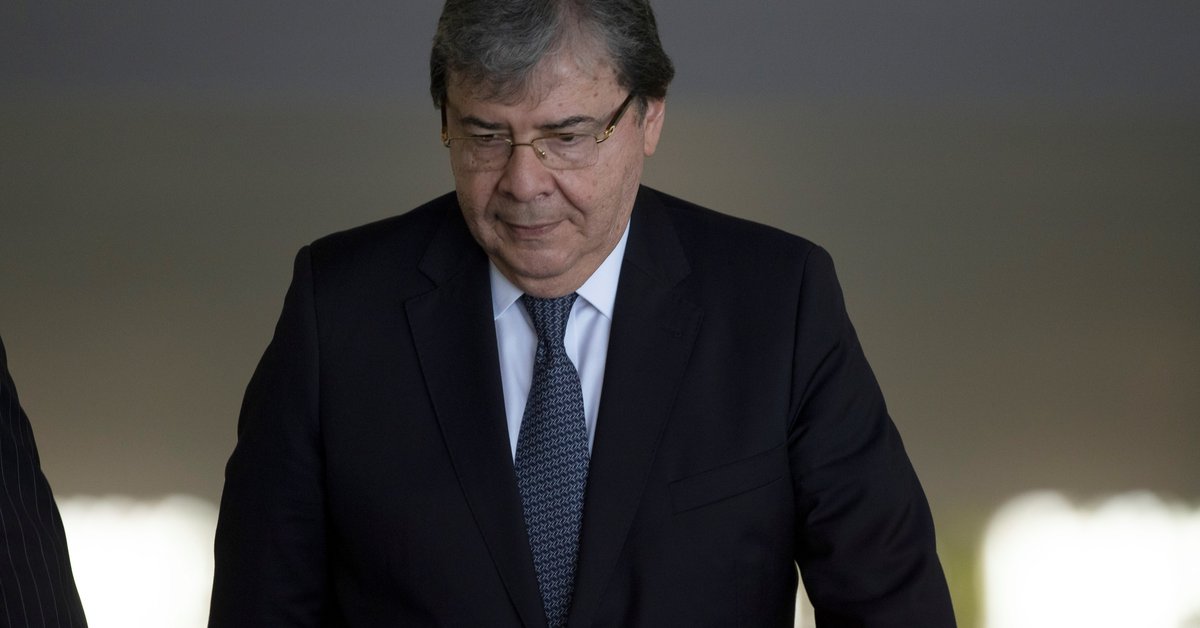 
This Wednesday, October 7, while the debate on the motion of censure against the Minister of Defense, Carlos Holmes Trujillo, was taking place, Judge Hilda González of the Superior Court of Bogotá indicated that the act of forgiveness for the events that occurred on September 11 did not conform to the order issued by the Civil Cassation Chamber of the Supreme Court of Justice, as assured by the minister.

So he ordered “Within a day, counted from the notification of this order, strictly comply with the order that, in the words of the Court, the latter should, as a symbolic measure of reparation, request and offer for the excesses of the public force”.

The minister was summoned to the Capitol to answer for the cases of police abuse that have arisen in the last protests that left several civilians dead. Likewise, explain whether or not you complied with what was ordered by the Supreme Court of Justice, which indicated apologize for Esmad’s actions in the November 2019 demonstrations, among other provisions. 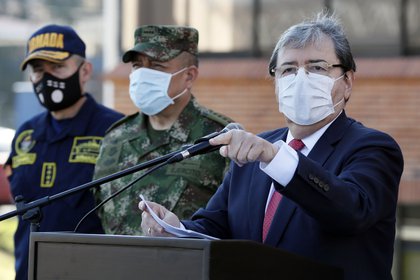 The Minister of Defense of Colombia, Carlos Holmes Trujillo (r), speaks during a press conference accompanied by the high command of the military and police, this Monday at the Higher School of War in Bogotá (Colombia). EFE / Carlos Ortega


The debate began with the intervention of the representative Ángela María Robledo, who criticized that Minister Trujillo arrived with the leadership of the Public Force when the debate was against him.

Robledo cataloged Trujillo as a representative of a government “In which many consider that we are in an authoritarian drift; a civil dictatorship that does not require the noise of sabers, that little by little has weakened the division of powers “said the former vice presidential candidate.

He also pointed out that “we have no response from the parapolice forces, they handed over weapons to civilians who helped to shoot at the protesters in places as painful as in the CAI of Verbenal.”

Then the representative Jorge Alberto Gómez of the Polo Democrático spoke, who, in the face of the Supreme Court ruling that the minister had to comply with on requesting public forgiveness for cases of police abuse, said that Holmes Trujillo “did not comply and wants to deceive the Court and the public”.

For his part, the representative to the Chamber for the list of the Decent, David Racero, showed with figures from the same Government and with studies carried out by entities that champion the issue of peace in the country, a resurgence of violence in Colombia, stating which went from 26 massacres in 2019 to 66 massacres this year.

“This debate is an accountability of the Duque government’s security policy, since in recent months it was believed that when Botero (former Defense Minister) left and someone with more experience came to that portfolio, he would improve the management of the Government in security matters, but it is seen that it got worse. Holmes is the political responsible for the failure of security in the country, it has been 2 and a half years of the Duque government and they continue to insist that this wave of violence is the fault of the previous government”, Racero explained.

For Toro, from the Ministry of Defense intends to tear the peace apart and what they are tearing apart is security.

One of the last to intervene was Representative Juanita Goebertus, who criticized the security policy of the Iván Duque administration. There, he highlighted the decrease in the confidence of the Public Force in the surveys, as well as the numbers of homicides and violent actions in the territory that have risen to the same levels as during the governments of Ernesto Samper and Andrés Pastrana.

“Here there has been talk of a dictatorship that threatens what is the democratic structure of the Nation. That does not correspond to the truth. The government of Iván Duque is the fruit of democracy ”, was one of the first sentences that Holmes Trujillo pronounced.

The minister indicated that he did not disregard the order of the Supreme Court of Justice, but on the contrary, it complied with and respected what was said by the judicial instance.

He said that through the pronouncement issued on September 24, he complied with the ruling that ordered him to apologize for the cases of police aggression presented in the latest protests.

“My conscience indicated that it was necessary to act in this way by virtue of the discomfort and anger that the loss of the life of Mr. Javier Ordóñez generated in the country,” said Holmes Trujillo for the forgiveness he requested on September 11, days before that the Court issued the ruling. “A spontaneous forgiveness is worth less than a forced one?”asked the minister.

American soldiers who came to Colombia

Another issue that the Defense Minister explained in this debate was the entry into the country of members of the US Army.

“I have been told: -You violated sovereignty because you allowed the presence and stay in Colombia of those American soldiers and that is not allowed by the Constitution-. But all I do is adhere to the Constitution, “said the head of the Defense portfolio.

According to the minister, it was not a troop transit but rather a cooperation exercise that Colombia maintains with the United States.

“You will not find a single vote in the Senate to authorize an issue of cooperation between the United States and Colombia,” said Holmes Trujillo.

Holmes Trujillo referred to the death of the young student Dilan Cruz, which occurred in November 2019, in the middle of a demonstration in Bogotá. 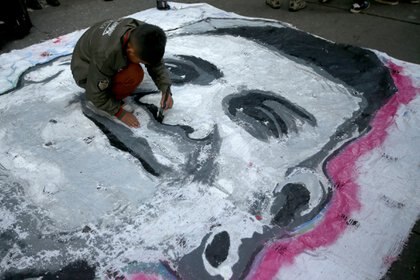 A boy works on a painting of Dilan Cruz on a banner during a demonstration in honour of Dilan Cruz, a teenage demonstrator who died after being injured by a tear gas canister during an initial strike, in Bogota, Colombia December 23, 2019. REUTERS/Luisa Gonzalez

“Dilan’s death also hurt me, it was a tragedy, that boy should not have met death under those circumstances”, said the minister.

But he asked that the competent authority be the one to advance in the investigation to find those responsible for the case.

Faced with the demonstrations caused by the alleged murder of Javier Ordóñez, the public official assured that it seems good to him that the people protest, but in a peaceful way.

“Vandalism, terrorism, destruction of infrastructure, these are criminal offenses and whoever incurs that conduct has the right to be investigated and the authorities to investigate“Said Holmes Trujillo.

Trujillo commented towards the end of his intervention that he is making progress in the internal investigations to clean up the institution, as well as the joint work with other authorities to advance the processes in these instances.

Representatives come out in defense of the minister

Among those who supported the Minister of Defense, was Representative Oscar Tulio Lizcano, who assured that the Public Force is being stigmatized.

“We must defend the institutions, I pay them a tribute of gratitude”said the politician.

For the Conservative party, Representative Felipe Andrés Muñoz defended the Defense Minister, noting that he is grateful for having reduced extortion in the department of Nariño.

“Thank you, on behalf of Colombians and on behalf of the world, for all that coca that has stopped being distributed on cartels around the world”, stated the curator.

One of the most critical moments that took place during the debate was when the representative Alfredo Ape Cuello pointed out that the people who were summoning the debate were “anarchists.”

“Those who want to use de facto means to run over the institutions, you the summons who want to weaken the public force so that they can take over Colombia”said Ape Cuello, provoking a strong rejection by the opposition parties that crossed out the representative “lambón” and recalled that he has been investigated for parapolitics.

Party representatives Cambio Radical, the Democratic Center and the U party were also against the motion of censure to Minister Carlos Holmes Trujillo and they supported his work as chief of the public force.

Next Tuesday, October 13, the House representatives will have to vote whether they are in favor or against the motion of censure against Defense Minister Carlos Holmes Trujillo.

Among the congressmen who cited the debate are Inti Asprilla, Catalina Ortíz, Katherine Miranda and Juanita Goebertus, from the Alianza Verde; María José Pizarro, from the Decentes list, and Ángela María Robledo, from Colombia Humana.

In a statement posted on his official Twitter account, the Conservative Party announced that it will not support the motion of no confidence and that with this “It will tell the country, once again, that without any calculation it is at the foot of government decisions that, among others, deal with the defense of life, honor and public and private goods of Colombians.” In addition, he ratified “his support for the public force.”

With this declaration, 21 votes of the conservatives are added to the 32 of the Democratic Center party and at least 53 congressmen who would vote in favor of the minister are confirmed. On the other hand, the representative Inti Asprilla told Infobae that he hopes that the independents from each party will join the vote to impose the motion of censure on the minister, In addition to the opposition, which is made up of the Alianza Verde, MAIS, Colombia Humana, Polo Democrático, Unión Patriótica and FARC, which would add a total of 21 votes.

When asked about the Liberal Party, which has 35 representatives in the Chamber, the congressman affirmed that he does not believe that they will vote collectively in favor of the motion because “there are many government members in that party.”

Another of the political forces that have not yet declared their vote is the Radical Change Party, which has 30 seats in the Chamber, but that has been characterized by voting in favor of the Government.

In Colombia, the motion of censure was established in the 1991 Constitution and was later amended in 2007 (Legislative Act 01). In both cases, the purpose was to limit presidential power and establish effective political control and accountability of the Legislative over the Executive.