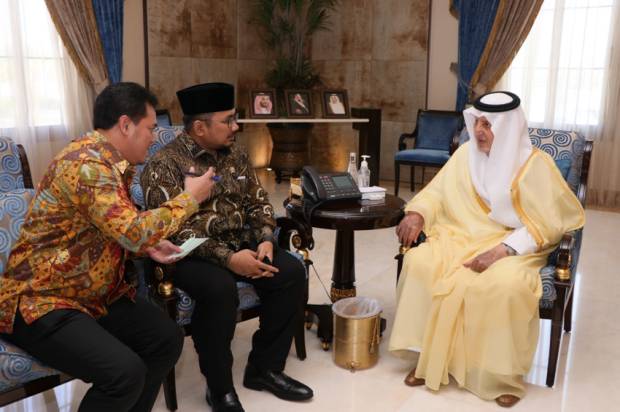 “Today I met the Governor of Makkah, Khalid bin Faisal. I convey information that the handling of Covid in Indonesia is generally under control,” Yaqut explained after the meeting in a written statement received on Sunday (21/11/2021).

In this meeting, Yaqut also said that the government continues to educate prospective hajj and umrah pilgrims to be disciplined in carrying out health protocols, including vaccinations and the implementation of PCR tests. Yaqut said the PCR test would focus on health facilities in Indonesia recommended by the Saudi Arabian government.

“To treat the longing of Muslims in Indonesia, I also express hope that the implementation of Umrah 1443 H will soon be reopened. Indonesia is ready to carry out the provisions set by the Government of Saudi Arabia,” said Yaqut.

Makkah Governor Khalid bin Faisal Al Sa’ud welcomed the visit of Minister of Religion Yaqut. He conveyed his commitment to provide services to Indonesian Umrah and Hajj pilgrims. But he again emphasized the importance of discipline in implementing health protocols because Umrah and Hajj 1443 H were held still in a pandemic situation.

On this occasion Khalid responded to Yaqut’s praise for the spread of moderate Islamic principles by the Government of Saudi Arabia. “In fact, we learn from Indonesia about religious moderation,” said Khalid bin Faisal.