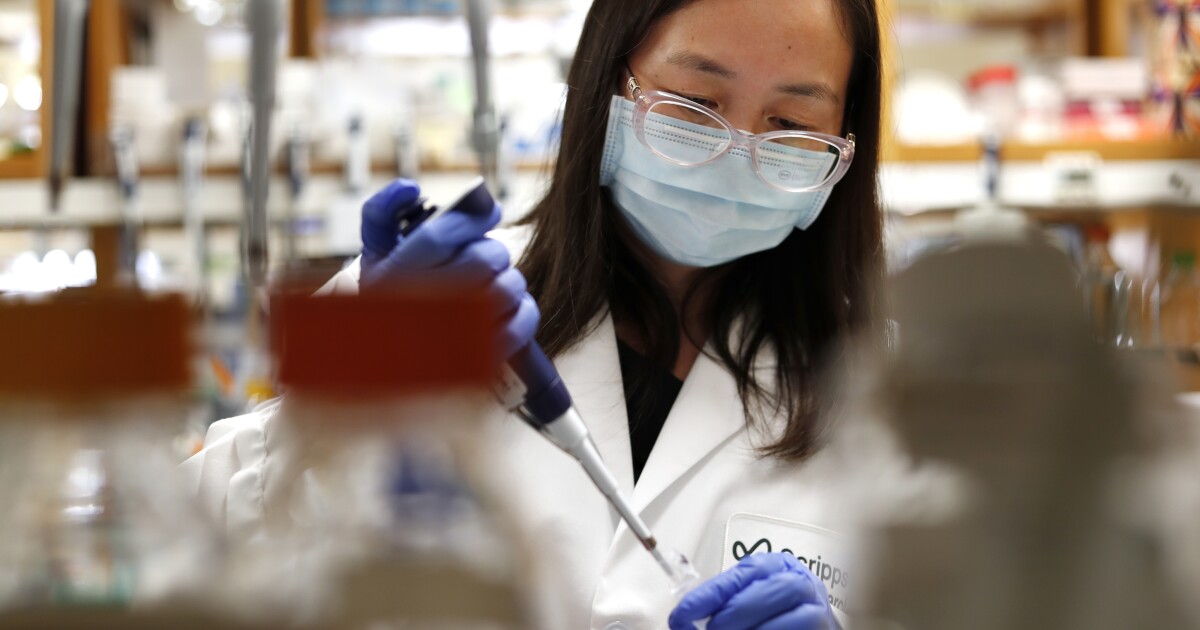 After developing a COVID-19 vaccine in record time, Moderna partnered with San Diego scientists to use biotechnology technology to make vaccines against HIV, one of the most complex and cunning viruses in the world.

A team from Scripps Research in La Jolla is working with Moderna to test an HIV vaccine designed to teach the immune system to make antibodies powerful enough to stop the virus.

Researchers are using the same RNA vaccine technology that has been shown to be safe and effective against the coronavirus, with an initial clinical trial starting in November.

This is an effort made possible, in part, thanks to the years of work by San Diego scientists, who have played a leading role in deciphering how the immune system responds to HIV and why, most of sometimes those responses are weak and limited.

Although antivirals are widely available in wealthier countries, there is a clear need for a vaccine.

About a third of infected people do not receive any treatment, according to the World Health Organization, often due to limited access to medication in lower-income countries. Last year alone, 700,000 people died of AIDS-related illnesses.

All other HIV vaccination strategies of the last 40 years have either failed or produced mediocre results. But observers say there is reason for genuine, if cautious optimism this time around.

“I don’t know if Scripps has solved it,” said Mitchell Warren, executive director of the AIDS Vaccine Advocacy Coalition, a nonprofit organization. “But we definitely want to pursue science, and science looks exciting right now.”

The problem is viral

If scientists ever develop an HIV vaccine, they will have overcome decades of disappointment.

In 1984, Margaret Heckler, secretary of Health and Human Services, said she was hopeful that researchers would develop a vaccine in two years.

Instead, the agency Heckler led claims that there are currently 38 million people living with HIV worldwide.

The absence of a vaccine is certainly not due to lack of effort; the trials conducted over the years have ranged from disappointing to historic failures.

In August, Johnson & Johnson suspended a trial in sub-Saharan Africa after finding that its HIV vaccine was only 25 percent effective. Other studies have been much more concerning.

In 2007, Merck suspended a trial of an HIV vaccine with 3,000 people, after there were indications that the injections made some people more likely to become infected.

Vaccine efforts have failed for several reasons. One of them is that HIV covers its most vulnerable points.

Like the coronavirus, HIV looks like a ball with spikes, and these spikes allow the virus to grab onto cells and sneak into them. But the spikes of HIV are mostly hidden under a tangle of sugar molecules.

Another problem is that the virus mutates its genetic code with mind-blowing speed, dwarfing the mutation rate of the coronavirus.

The immune system tends to recognize the areas of the virus that change the most, making these responses weak and short-lived. According to Dennis Burton, an immunologist at Scripps Research, any potential vaccine must be much better.

“That is one of the big problems with HIV,” he said. “There are literally hundreds of thousands of different strains, and you don’t know which one you are going to be exposed to. So you have to be protected against all of them. “

A long and winding road

Burton’s team took an unorthodox approach to finding a vaccine. Rather than testing a series of candidates and hoping that one will produce the right type of immunity, they are following patient directions.

Their goal is to find people whose immune systems produce unusually strong counterattacks against the virus, and then design vaccines that do the same for those who have not yet been infected.

Any person carrying the virus produces antibodies against it; in fact, HIV is often diagnosed with an antibody test. But Burton’s team found that only 10 to 20 percent of patients produce so-called broadly neutralizing antibodies.

These Y-shaped immune proteins stick to the virus strong enough and in the right spots to prevent most strains from becoming infected. To do this, the antibodies adhere to some of the few regions on the surface of HIV that do not change, since the mutations that occur in them would paralyze the ability to infect and spread the virus.

Animal studies and a recent clinical trial showed that infusing high levels of broadly neutralizing antibodies could help fight the virus. This is the same idea behind the convalescent plasma and monoclonal antibody therapies currently used against COVID-19.

See also  Is the mRNA vaccine safe? Close to 1 million people were researched Here are the results!

However, it is a temporary and expensive way to protect people, as antibody treatments must be administered regularly through an IV. A much cheaper and more durable solution would be to teach the body to make these antibodies.

But researchers now understand why that rarely happens naturally.

People with broadly neutralizing antibodies are usually infected for about two years, which is too late. This is because HIV slides its genetic code into ours within days of infection.

This pool of viral DNA remains latent, but can be reactivated at any time, causing the infected cells to produce new viral copies. And that is why HIV-positive people must take antiviral drugs throughout their lives.

Part of the problem is that the strongest antibodies to HIV are only made after a long process of cellular evolution. When an antibody-producing cell, known as a B cell, first recognizes a virus, it divides over and over again.

Most cells in the body divide into identical copies, but the newly activated B lymphocytes mutate their antibody-coding genes, producing cells with different versions of the original antibody, a bit like musical variations on a common theme.

Some versions latch onto a virus better than others. Those that cling best survive, while those that don’t die. It’s survival of the fittest, on a microscopic scale.

This is a normal part of any immune response, but broadly neutralizing HIV antibodies depend on it much more than usual.

“The fact that these antibodies exist shows that a vaccine is, in principle, possible,” says Burton. “(But) it is a long and winding road to get to the broadly neutralizing antibodies. And we have to shorten that road by, effectively, three or four injections.”

A new opportunity to achieve immunity

Protein design expert Bill Schief is tasked with figuring out what those vaccines contain.

Schief, a physicist by training who left the University of Washington to join Scripps Research in 2011, is trying to design a vaccine from the antibodies that Burton and others have discovered.

His team takes everything researchers have learned about these antibodies – such as where they attach to the virus and their 3D shape – and uses algorithms to reconstruct the appearance of those antibodies before they became powerful weapons against the virus. HIV

It turns out that the initial versions, baby, of these antibodies do not adhere very well to HIV. So injecting someone with a piece of the virus as is will not work.

Instead, says Schief, researchers have to inject a series of modified HIV proteins to guide these baby B cells as they mature into true virus blockers.

The scientists tested the first step in this process in a trial of 48 participants, 12 of whom received a placebo injection while the other 36 were inoculated with a protein designed to activate B cells with broad HIV-neutralizing potential.

According to Schief, these cells are rare and rare, perhaps one in a million baby B cells. But researchers announced in February that 35 of the 36 vaccinated volunteers responded to the vaccine.

“My first reaction was: well, it may not be that good. Something must be wrong with our chain of analysis. We have to check it again before we get too excited, ”said Schief. “It was not a small, weak response that might or might not help later in a real vaccine. It was a great response. “

The results have not yet been published in a scientific journal. But the Scripps team, in collaboration with the International AIDS Vaccine Initiative, a global nonprofit organization, has already partnered with Moderna to test whether an RNA version of the vaccine can produce the same results.

Despite the astonishing success of COVID-19 vaccines, using RNA does not guarantee that the vaccine will work. But the researchers say it’s a faster, cheaper, and more efficient approach. Instead of producing the vaccine proteins in a factory, scientists will send the genetic instructions to the billions of tiny protein-making factories inside the body – cells.

“We think it’s totally transformative in terms of our ability to learn how to develop an HIV vaccine through human clinical trials in a reasonable amount of time,” said Schief.

Moderna’s trial, likely to begin in November, will recruit 56 volunteers in Georgia, Texas, Washington DC, and Washington state to see if the results Scripps scientists reported earlier this year can be replicated with a version of RNA. of the vaccine.

The researchers will also give some participants a second injection eight weeks later to guide the newly activated B cells to the next step in producing broadly neutralizing antibodies.

“We know we can get started,” Burton said. “Now we need to know what we can do in the middle and what we can finish.”

And its advocates say the need for an HIV vaccine will not go away, no matter how long it takes to get it.

“We need an HIV vaccine as desperately today as we have in 40 years of pandemic,” Warren said. “COVID-19 didn’t change that.”