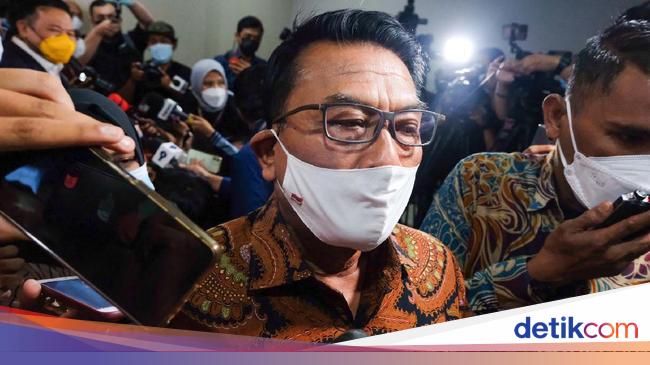 Presidential Chief of Staff (KSP) Moeldoko visited the Bareskrim Polri to be examined as a reporting witness in the case of allegations of ‘Ivermectin promotion’ and rice export. Moeldoko, through his attorney, said he had no intention of making peace with the two researchers from Indonesia Corruption Watch (ICW), namely Egi Primayogha and Miftah, who were reported in this case.

“We’re reporting, because we’re the ones reporting, of course we don’t have that kind of thinking (peaceful) right. Yes, because according to the police, they haven’t been summoned yet, they’ve been reported. We’ll see what happens next,” said Moeldoko’s attorney, Otto Hasibuan, after accompanying his client at the Criminal Investigation Unit of the National Police, South Jakarta, Tuesday (12/10/2021).

Otto explained, now the apology by ICW will no longer be valid because it cannot erase the criminal. According to him, Moeldoko had given the opportunity to apologize before the two were reported.

“Yes, an apology does not erase the crime. At that time we did a subpoena, Pak Moeldoko was simple. He wanted to say that, ‘if you feel like you have no evidence and you feel wrong, yes, just retract the statement and apologize. I’m done, I’m sorry’. Pretty good Mr. Moeldoko, Mr. Moeldoko not neko-neko,” he said.

“Even that was not done, so how can we stay silent? So, even if Mr. Moeldoko did this report, it was actually forced. Actually reporting this is something that Mr. Moeldoko did not want,” continued Otto.

Furthermore, Otto said, Moeldoko checked by the police for about an hour. On that occasion, Moeldoko also prepared 3 witnesses to support his statement.

Meanwhile, continued Otto, this report is a manifestation of Moeldoko’s wish to emphasize that the accusations of ‘Ivermectin promotion’ and rice exports are completely untrue. Otto said Moeldoko respects criticism, but not with people who make accusations.

“So the essence of why this continues, is that we want to prove that the behavior accused of Moeldoko is not true. So that everyone does not arbitrarily accuse others. We respect criticism, we respect democracy, but never abuse democracy for the sake of good. harm other people,” added Otto.

Read more on the next page.