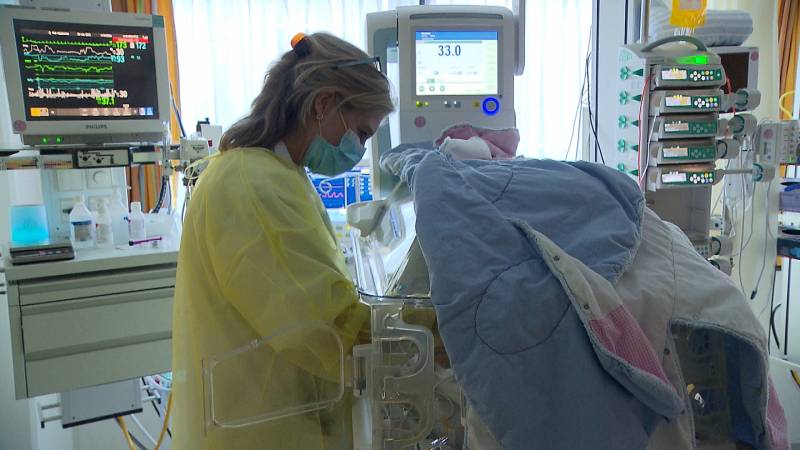 Gynecologists in the Netherlands are sounding the alarm because the number of unvaccinated pregnant women who end up in intensive care is rising. This increase is clearly visible in the Rotterdam Erasmus Medical Center, where the number of ICU admissions of pregnant women has doubled since the summer.

Gynecologist Hans Duvekot of Erasmus MC has so far been able to save the lives of all these women, but in his eyes it is just a matter of waiting for the first victim. Duvekot is not only concerned about the physical impact on the expectant mothers, but also about the mental consequences. “They are here on a ventilator for weeks and then we may have to get the child by Caesarean section. While the mother is still in an artificial coma. The impact of that is enormous.”

A total of 32 women ended up in the ICU at Erasmus MC, the last one was admitted last weekend. None of those women had been fully vaccinated. Other hospitals in the Netherlands also see more pregnant women in their ICUs, but the numbers are still lower. According to Duvekot, it is not clear why Rotterdam is such a hotbed. “What we do know is that the increase came after the British variant and now the delta variant made its appearance. And we know that all women who end up in ICU have not been vaccinated.”

The woman in the video below was unvaccinated and contracted corona. As a result, her child had to be delivered via emergency caesarean section after just 26 weeks:

‘I think it’s stupid that I didn’t listen’

Christianne de Groot, board member of the NVOG, says that as a gynecologist she regularly has to deal with pregnant women who do not want to be vaccinated. “We were cautious at the beginning of the vaccination campaign. We now know that the vaccine is safe for pregnant women.” Yet it is estimated that only 30 to 50 percent of pregnant women are still vaccinated.

IC admission has a major impact on mother and child. In seven percent of the nationally admitted women, the baby had to be delivered by Caesarean section during the ICU admission. “Women wake up after three weeks on a ventilator with an empty stomach. Most of the women are then very confused,” says Duvekot. “Even so bad that we have to get the psychiatrist involved. It’s also terrible, of course.”

Although covid as a disease does not seem to be very harmful to newborn babies so far, premature termination of pregnancy is. The baby is not yet fully grown and ends up in the neonatology department, the ‘ICU for newborns’. There they are kept alive artificially with IVs and artificial respiration, at least until their due date. Babies are now sometimes removed from the abdomen early at 26 weeks, because otherwise the mother or child will be too bad.

At the neonatology department of the Wilhelmina Children’s Hospital in Utrecht, department head Manon Benders has already seen many covid babies pass by. They are isolated and require extra care. That means a double burden for nursing staff and doctors, who were already dealing with a shortage of IC capacity for premature babies before corona.

Benders describes the high risks of preterm birth for a baby: “There is a risk of infections, brain haemorrhage, intestinal infections, all of which can have long-term consequences for the rest of your life. It is a very bad start, which also could have been prevented.”

Doctors and neonatologists have no doubts that a vaccination significantly reduces the chance that women and their preterm children end up in the ICU. “You see that after these traumatic experiences they often regret that they did not get vaccinated,” says Benders. Duvekot spoke to a patient who, even after weeks of staying in the ICU, still denied that she had corona. “But most want to be vaccinated as soon as possible,” said Duvekot.