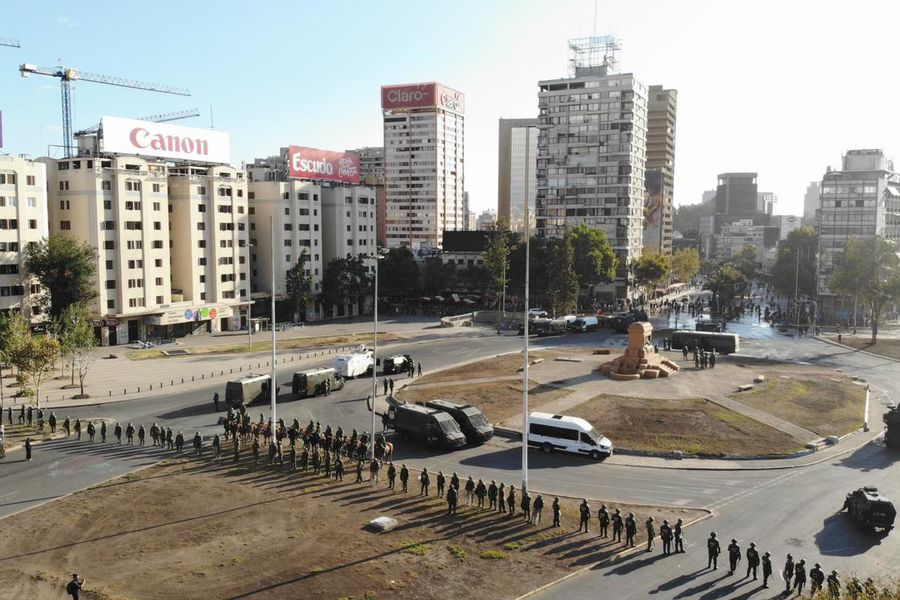 It was a meeting to define what would be done in the South Macrozone, once the state of exception has been decreed. There were President Sebastián Piñera; the Minister of the Interior, Rodrigo Delgado; the undersecretary, Juan Francisco Galli; the general director of the Carabineros, Ricardo Yáñez; the national director of Order and Security, General Marcelo Araya, and the head of the PDI, Sergio Muñoz. Having coordinated the support work that the heads of Defense appointed by the Armed Forces (Armed Forces) would provide, the meeting moved on to another issue that worries La Moneda, in terms of public order: the second year of commemoration of October 18, 2019. Thus, the police chiefs went on to relate how the panorama is envisioned for that day and how they could be deployed to avoid serious excesses, mainly in the Metropolitan Region.

There will be more than five thousand police officers who will be available to go out to the streets of Santiago during 18-0, however, preventive tasks will not only focus on that day. Both the government and the uniformed police already have all the calls for mobilizations that are being raised on social networks for October 15, 16, 17 and 18. That’s it: Friday, Saturday, Sunday and Monday.

So far, it is more than fifty mobilizations and protests for those days. But in the Executive and in the police they hope that heThe most massive demonstrations are concentrated on Friday of this week and Monday, October 18.

In the case of Friday, the protests, since the social crisis broke out, have become more concentrated that last day of the week. For the same, It is expected that this day will be the one that will be more “hot” in this weekend of commemorations. However, the government and Carabineros authorities do not make such a pessimistic analysis about what may happen: “We are not the same police as on October 18, 2019,” says a senior police source.

And of course, in the government they also highlight that the protocols were perfected, the vehicles were renewed and that the staff is more trained, both in operational tasks and in the conception of correctly applying what has been learned in the field of human rights. For both Friday, Saturday, Sunday and Monday, the instruction to the police is one: arrest for flagrant crimes.

From La Moneda, the undersecretary of the Interior, Juan Francisco Galli, will be in charge of supervising what is happening in places where excesses and mobilizations take place. It will do it -as is customary- from the General Directorate of Carabineros, where he will be accompanied by the National Chief of Order and Security, Marcelo Araya.

Until now, different sources that participate in the coordination for those days have been consulted, a barracks of the uniformed men for that day is not contemplated. What is foreseen is that a planning similar to what happens on days like the September 11 and March 29 (Young Combatant’s Day).

That means that the personnel who must go out to control public order are available in the police stations and those who have free, maintain that disposition. In case of “tense” the spirits and have more than one emergency, the decision will be made in that minute.

Another provision on the part of the authorities and the police will be to keep personnel deployed in the vicinity of “risk areas”, places that are generally the scene of the most serious excesses: Plaza Italia, Villa Francia (Central Station), Lo Hermida (Peñalolén), near Santiago Centro, Cerrillos, Conchalí and Recoleta. This, added to other sources that can be activated during those days.

And the Armed Forces? Unlike last year, this time there is no state of exception and his role will not be on the street. Anyway, internally, the possibility of reinforcing the guard in the regiments is analyzed, those who were the object of attacks and demonstrations for the social outbreak.