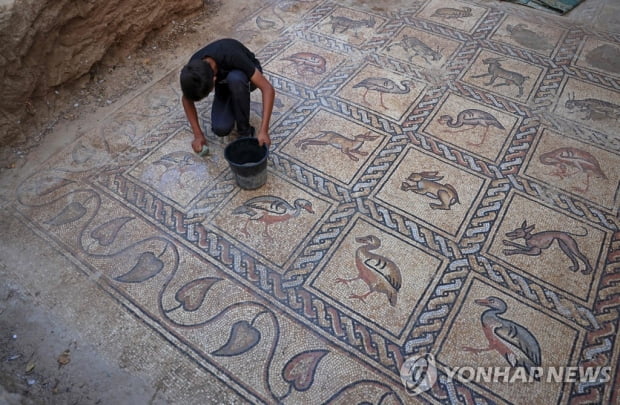 Burei refugee camp in central Gaza, Palestine.
A colorful mosaic decoration believed to date from the 5th to 7th centuries of the Eastern Roman Empire was discovered in an olive farm in a refugee camp, about 1km from the border with Israel.

The mosaic decoration, which was revealed when about 1 meter of soil was removed from the farm, is almost in perfect condition.

From depicting animals such as ducks and rabbits, sheep and foxes, to decorations depicting life in the Eastern Roman Empire, it is very elaborate and splendid.

It was Salman al-Nabahin, a farmer who grows olives here, who discovered this precious mosaic decoration.

He says he and his son accidentally discovered mosaic decorations while digging with his son to find the cause when a newly planted olive tree died a few months ago without taking root.

Then he searched the Internet and found that these decorations were similar to those of the Eastern Roman Empire, and he informed the Palestinian government.

It is known that many relics of the Byzantine style as well as the ancient Egyptian kingdom and the Philistines (people who lived in southern Palestine) remain in the Gaza Strip, one of the main trading hubs of the Eastern Roman Empire.

However, due to the lack of financial and technical resources in Palestine, which is blocked by Israel, excavation activities have not been actively carried out.

So again, with the help of the French Archaeological School in Israel, they announced their plan to conduct a formal excavation of the mosaic decoration.

See also  "Megatown" is the first of its kind in Norway and probably also in the world - NRK Oslo og Viken - Local news, TV and radio

The Palestinian Ministry of Tourism and Antiquities said, “The archaeological excavation of this mosaic decoration is at an early stage and we are looking forward to learning more about its secrets and historical value. said.