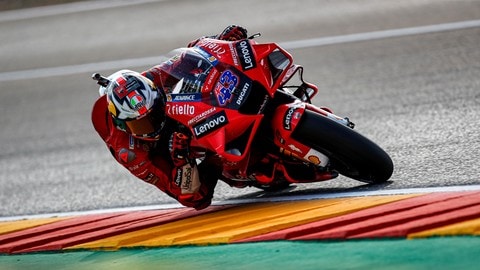 The Aragonese track gave a great show in the MotoGP FP2 on Friday afternoon. Marc Marquez’s plans this morning have been nothing short of upset, in that Ducati rider Jack Miller went to pull an amazing spin out of the hat in 1:47.613. For those who thought that the Desmosedici would not be competitive enough at Aragon, they can easily change their minds because the Australian has shown that he is energized and motivated to do very well.

The red arrow Miller he had his say and everyone remained impassive to watch: from Marc Marquez, to the world leader Fabio Quartararo. There was no story for anyone. Despite the tarmac temperatures higher than in the morning, times continued to drop, not only for Jack but also for Aleix Espargarò that even in Spain he is proving that Aprilia is there, and it goes like a splinter. Surprisingly, the test driver also arrived with the third best time (+0.284) Cal Crutchlow riding the factory M1 of former Yamaha rider Maverick Vinales.

The others? Again for them missed the Top 10. Se per Marc Marquez suffered a crash while he was trying to overtake his brother Alex, and finished in 20th place, Alex Kidneys closed FP2 in 11th place, with Valentino Rossi 18th, Maverick Vinales 19th and Joan Mir 21st.

See also  Political polls, Brothers of Italy at the top ahead of Lega and Pd

The ranking of the combined times

But let’s go and look now the ranking of combined times from which we will restart tomorrow with a view to FP3 and qualifying: Miller commands, followed by Aleix Espargarò and Cal Crutchlow. From fourth to sixth place, then, there is a Ducati hat-trick with Zarco, Martin and Bagnaia who anticipate Quartararo, Marc Marquez and Takaaki Nakagami with Enea Bastianini to close the Top 10. To occupy the 19th position is Valentino Rossi ahead of Maverick Vinales, on his first day of official testing with Aprilia.