Micro-Star International (MSI) has expanded its Gaming and Ventus series of gaming graphics cards with GeForce RTX 30-series models based on the new NVIDIA Ampere microarchitecture.

The MSI Gaming Trio and Gaming X Trio series have been expanded with GeForce RTX 3090, RTX 3080 and RTX 3070 models. All new additions include an updated design of the TRI FROZR 2 cooling system using massive radiators, as well as three new TORX Fan 4.0 fans. The peculiarity of the latter is that every two propeller blades are connected together in a pair, which, according to the manufacturer, makes the cooling system more efficient compared to the previous generation of TRI FROZR COs.

Since the video cards are massive, they are equipped with a stiffening plate (backplate), which prevents the board from bending. Traditionally, all new products in the Gaming Trio and Gaming X Trio series are equipped with RGB-backlighting, which can be controlled through MSI’s proprietary Mystic Light software and synchronized with the rest of the computer backlighting via Mystic Light Sync and Ambient Link included in the Dragon Center software package. 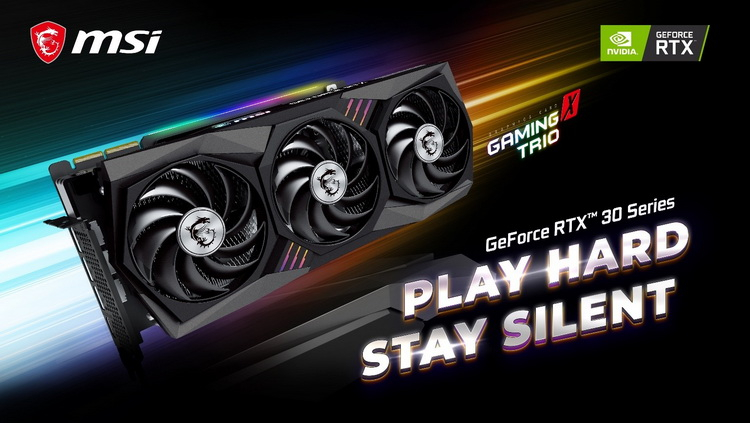 Unfortunately, the manufacturer does not indicate the full technical characteristics of any of the video cards presented today. But NVIDIA itself is in no hurry to reveal all the cards. At the moment it is known that MSI Gaming GeForce RTX 3090 Gaming Trio / Gaming X Trio models are equipped with 24 GB of GDDR6X video memory, with support for 384-bit bus. For additional power, the new items use three 8-pin connectors. It is likely that both cards are factory overclocked. But for the Gaming X Trio, it will traditionally be slightly higher than for the Gaming Trio.

The cooling system for MSI Ventus graphics cards now offers more than just two cooling fans. The series has been expanded with a more efficient cooling version with three “turntables”. By the way, MSI updated the latter to TORX Fan 3.0. The series is represented by models GeForce RTX 3090, RTX 3080 and RTX 3070 with and without factory overclocking.

All of the above graphics cards from MSI are equipped with three DisplayPort 1.4a and one HDMI 2.1 video outputs.

The manufacturer promises to tell in more detail about their new products tomorrow, as part of a special stream. Perhaps at the same time we will find out about the prices for these video cards, since MSI has not announced them yet. At the same time, it is noted that in the future the company is going to present other versions.

This Monday, President Sebastián Piñera released the names of his new collaborators and changes in your current cabinet, where...
Read more

The game that changed his career at River and what Gallardo told him to convince him: the secrets of Rafael Santos Borré, told by...

Rafael Santos Borré, one step away from becoming the top scorer of the Marcelo Gallardo cycle at River...
Read more

One of the fundamental tasks of the media is (or should be, at least) the dissemination and promotion of...
Read more

In the framework of the “on-site visit” (on-site observation) being carried out in the country, a mission from the...
Read more

Prompt retirements in the public sector are an “opportunity” • University Weekly

The ruling party met with the Board of Directors of the union of business chambers, where he discussed issues...
Read more

One of the fundamental tasks of the media is...
Read more
Technology

Almost all of the large video game companies have...
Read more
Technology

Demon’s Souls for PS5 will be dubbed into Spanish

Apple releases iOS 14.1 and iPadOS 14.1, performance improvements and compatibility with the new iPhones

Apple has just released updates for the...
Read more

Inter, Zhang risks everything: now Conte must change, otherwise it will be a disaster announced | First page

In the third round of the girls' tournament in Kaunas in the Latvian U16...
Read more
Archynewsyarchynewsy.com