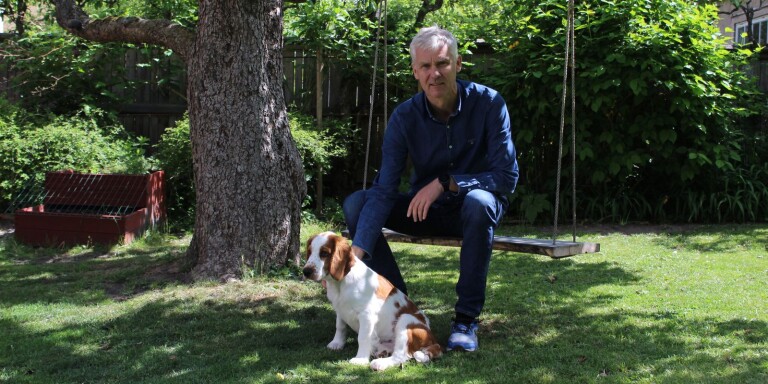 Erik Öhman in Kalmar found out after completing four Ironmans that he had type 1 diabetes. Now, after a year with the disease, he will complete his fifth race.

– I want to inspire others who have been affected by diabetes to dare to exercise and have an active life, he says.

Does: Works at the E-health authority with regulatory issues

It was at the turn of the year 2020/2021 that Erik found out that he had diabetes. At the time, he was up in the mountains skiing with his family.

– I peed a lot and was very thirsty, but I thought that I was out and about and that there shouldn’t be any danger. But when we were in the car on the way home, we had to stop every two hours so that I could run out into the woods and pee, and then I felt that this is something strange.

When the family came home to Kalmar and the problems did not stop, he contacted the health center and was allowed to come in to take samples.

– My brother has had diabetes for 25 years, so I had little idea what it could be. Then one Friday, on my daughter’s 18th birthday, we were going out to eat at a restaurant and celebrate and then they call from the hospital and say I need to come in. Then I had very high blood sugar values. But I didn’t want to say anything and ruin my daughter’s birthday, so we went out to eat and then I went to the emergency room the next day, he says.

In the long term, elevated blood sugar can damage the body’s blood vessels, which can lead to, among other things, impaired vision, impaired kidney function and impaired sensation in the feet. Therefore, it is important for a person with diabetes to keep their blood sugar at as even a level as possible.

Conversely, if the blood sugar level is too low, a person with diabetes can suffer from an insulin sensitivity (hyperglycemia), which means that the brain does not receive enough nutrients. This can be due to a missed or delayed meal, too large an insulin dose or strenuous exercise.

For Erik, who has been very active all his life, it was a big adjustment.

– It was a bit of a shock, now you would have to live with this for the rest of your life.

– Then I could start moving again. I felt like I wanted to get back and start working out again, like I did before I got diabetes, when it had been a big part of my life. So then I tried to first walk and then run a short distance, constantly measuring how the blood sugar looked. I had read somewhere that you needed to fill up with energy so then I used dextrose tablets and calculated that I needed to take one for every kilometer I ran. Then I noticed that the blood sugar remained stable.

How much did you exercise before you got diabetes?

– In the past, I have trained several times a week, participated in four Ironman and about ten marathons, Swedish classics and ultramarathons. I have been with Kalmar RC and another club when we lived in Stockholm. So I felt like I wanted to continue. But it has really been a journey learning how my body works. You shouldn’t say that what I do works for someone else who has diabetes, but you have to try yourself. Everyone must try to find their own way.

And now you are going to compete in the Ironman for the first time with diabetes. How is it different from when you participated in the competition before?

– I have to plan in a different way when I train and I don’t have the same freedom as before. For example, I have a meal plan and I have to constantly keep track of which level I am on. Sometimes it’s hard to know what’s going on, it’s not always exactly the same as a clock, but one’s stress level also affects. Even what you ate yesterday affects how you feel today.

– I can’t say that I will succeed in completing the race, but it is a challenge. The goal is to implement it and then you can take it from there. I feel a little nervous but it doesn’t feel impossible! The swimming is what I feel I need to practice, to swim longer and try to measure the blood sugar at regular intervals. I have to figure out how to eat while swimming, there are little bags of sugar solution that you can keep in your wetsuit. When I run and cycle, they usually hand out sports drinks with sugar in them, so then I don’t have to take dextrose tablets all the time anyway.

See also  So the mystery of space, it turns out that the largest black hole can accommodate millions of planets, you know?

What are your expectations?

– Completing the race and having fun. I don’t have a time target or anything, but it will be as it will be. Since I haven’t done it before with diabetes, you have to erase your old times and start over a bit.

Are there any benefits to having diabetes when it comes to exercise?

– You cannot say that it is an advantage to have a disease, but with today’s technology it is possible to measure blood sugar during activity. Which means I’m always in control of my blood sugar. Even if I’m out running, I keep track so I don’t run out. The positive thing about diabetes is that it is possible to have an active life. The diabetes care is fantastic and have been so helpful and supportive and encourage an active life. They say that it is good to exercise every other day because then you become more insulin sensitive, which is good because it becomes like a form of medication. If the blood sugar goes up a lot, I can just go for a walk with the dogs as it goes down because I’m moving.

– I want to motivate others who have suffered from diabetes, or other similar diseases, to dare to exercise and have an active life. It leads to well-being, you become happy and are physically affected. Being part of an association is also stimulating, it provides context. Then you don’t have to maintain this level, you can do other things. If you want a goal, you can start with the Mini Tri or some other race!

This is how Kalmarposten works with journalism. Information published must be correct and relevant. We strive for first-hand sources and to be there where it happens. Credibility and impartiality are central values ​​for our news journalism.