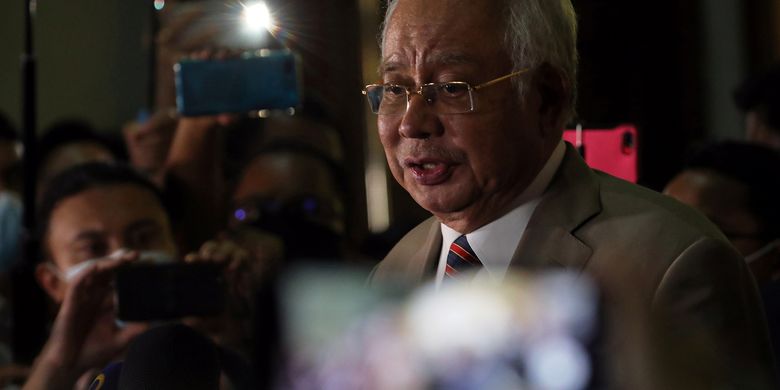 The findings were revealed by the Malaysian High Court on Thursday (7/30/2020) as reported by Malaysian media The Star.

Najib apparently only took the words of Low Taek Jho or Jho Low, a fugitive in this case, that the money he received was from the Arab Kingdom.

This is included in some findings from Judge Mohd Nazlan Mohd Ghazali who disclosed the remittance from the Arab on Tuesday (28/7/2020).

On the same day, Najib was found guilty of all 7 charges against him, and sentenced to 12 years in prison and a fine of 210 million ringgit (Rp 721.7 billion).

Reported Malay MailJudge Nazlan explained that the fine was five times the gratuity received by the former Malaysian PM.

The intended gratuity is an indictment that Najib misappropriated 42 million ringgit (Rp 144.3 billion) funds from SRC International, a subsidiary 1MDB, to his personal account.

Also read: Former Malaysian PM Najib Razak Should Get 72 Years in Prison and Execution, but …

Najib in his defense said the late King Abdullah of Saudi Arabia had pledged his support to Malaysia at a meeting in early 2010.

“Most importantly, it must be known immediately, however King Abdullah did not say the exact form of his support.”

“In other words, according to the testimony of the defendant, Raja Abdullah did not mention the intention to provide funds or donations to the defendant, or to Malaysia,” said Judge Nazlan quoted from The Star.

According to the court, it is common for leaders of independent states to express their support to other countries’ leaders in international relations and alliance diplomacy.

Also read: Sentenced to 12 years in prison, Najib Razak: I am not satisfied

The judge also said that there were many problems with Najib’s testimony.

“First, the defendant did not say he heard directly from, or was personally told by the Saudi King about cash donations.”

“Secondly, there is no evidence that the defendant tried to verify this intention which was attributed to King Abdullah with anyone.”

“Not with the King directly, or with any government official who can easily check to verify information for the Prime Minister.”

“Third, there is no evidence that the intended donation will be accompanied by conditions of use as well. There is none at all.”

“The defendant only took the words of (fugitive entrepreneur) Low Taek Jho (or Jho Low),” he said.

“In other words, the defendant has no proof.”

Judge Nazlan also said that the claim that King Abdullah wanted to make a personal contribution to the defendant through a personal account seemed “unusual” in international relations, even at the personal level between state leaders.

“And there is absolutely no official confirmation from the government (both from the Kingdom of Saudi Arabia and Malaysia) that the accused as prime minister received donations from King Abdullah in his personal account for a certain period,” he added.

Judge Nazlan said there was no contact between the actual sender and the defendant, before or after the fundraising.

He then called Najib’s defense unacceptable because everything was made up.