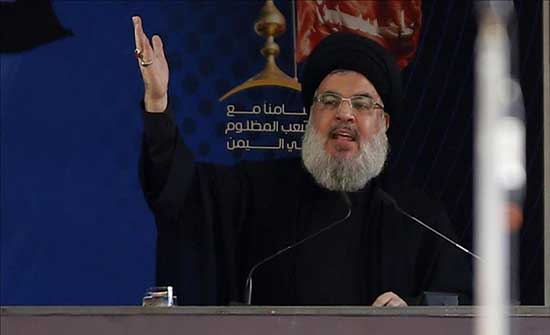 Al-Madina News: The Secretary-General of the Lebanese “Hezbollah” group, Hassan Nasrallah, revealed, on Friday, an agreement with Iran to start loading a third ship of oil derivatives to Lebanon.

This came in a televised speech by Nasrallah on the “fourth anniversary of the second liberation”, which was broadcast by some Lebanese channels, including Al-Manar TV, which is close to the party.

He said, “It was agreed with the Iranians to start loading a third ship of oil derivatives to Lebanon,” adding: “We need more than 3 ships to face the next near stage.”

On August 19, Nasrallah said that an Iranian fuel ship was on its way to his country. On August 22, he said that the second oil ship would sail to Lebanon within days, and other ships would follow.

So far, it has not been announced that any ship coming from Iran has arrived in Lebanon, and no official comment has been issued by the government about those ships and the place where their cargo will be unloaded and for whom.

For more than two months, Lebanon has been suffering from a severe shortage of fuel, due to the lack of sufficient foreign exchange to import.

Nasrallah stressed in his speech today, “the importance of forming a government as soon as possible in order to start solutions to crises.”

On July 26, President Michel Aoun commissioned Najib Mikati to form a new government, to succeed the caretaker government, which resigned six days after the explosion of Beirut Port on August 4, 2020. Consultations are still ongoing between them to agree on a government formula.