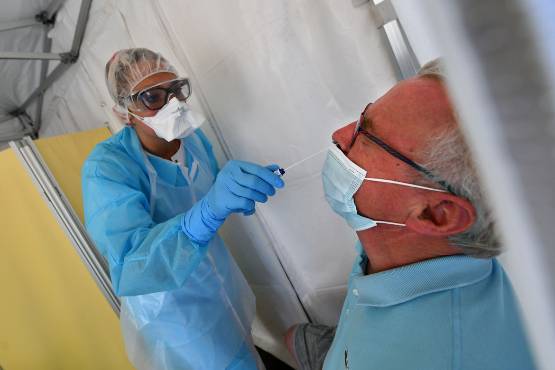 The number of people diagnosed positive for Covid-19 has increased further in the past 24 hours with 1.397 new cases, against 1,039 cases last Tuesday, indicated Tuesday, August 11 the Directorate General of Health (DGS). In total, 204,172 cases of Covid-19 have been observed in France since the start of the epidemic.

Since Monday, 25 new epidemic foci have been identified, bringing their number to 879 since May 9, of which 227 of them are under investigation. 560 of them were however “closed”, specifies the DGS.

The regions of Ile de France, Auvergne-Rhône-Alpes, Hauts-de-France, Guyana include 69% of patients in intensive care.

The Prime Minister called on the French to pull themselves together to avoid a resumption of the Covid-19 epidemic, pleading for the wearing of the mask despite the heatwave, which should finally end on Thursday.

“I say it with a form of gravity: if we do not react collectively, we expose ourselves to a high risk of epidemic resumption which will be difficult to control”, declared Jean Castex during a trip to the Montpellier University Hospital, fearing a return to a health system “under tension”.

“This is the reason why (…), I will ask the prefects to approach local elected officials to extend as much as possible the obligation to wear a mask in public spaces”, he added, also announcing a strengthening of controls on compliance with the rules and the extension of the ban on gatherings of more than 5,000 people until October 30.

By announcing Tuesday to have developed the “first” vaccine against Covid-19, called Sputnik V, Russia intends to position itself at the head of this global competition with considerable financial stakes. But beware of announcement effects and dashed hopes.

Tuesday, August 4, the Scientific Council, which guides the government in the fight against Covid-19, warned that France was not immune from an uncontrolled resumption of the epidemic, and urged the French to respect barrier measures.

Wearing a mask, compulsory in closed public spaces since July 20 in France, extends outside in more and more cities in the country.

And elsewhere ?
Worldwide, the mark of 20 million proven cases has been reached. And we count 737. 285 deaths.

The Center-Val de Loire regional health agency has announced that it now publishes only one newsletter per week, on Friday.

Here are the data from the latest press release from ARS Center-Val de Loire on Friday, August 7:

142 deaths recorded in Eure-et-Loir in hospitals

142 deaths were recorded in hospitals in Eure-et-Loir, according to the press release published this Friday, August 7, in the evening, by the Regional Health Agency (ARS) Center-Val de Loire.

Eure-et-Loir is still the department that has recorded the most deaths in hospitals since the start of the crisis.

Why have there been more deaths from Covid-19 in Eure-et-Loir than in the rest of the Center-Val de Loire region?

As a reminder, the Dreux hospital center noted the death of a first patient carrying the coronavirus on March 17. It was a 72-year-old man hospitalized in the continuing care unit.

560 dead in the region since the start of the epidemic, in hospitals

The ARS bulletin only takes into account deaths declared in software in which health establishments record the deaths, “and only those”, explains the ARS. Are not mentioned the patients who died at home (declared positive or not tested), and certain patients tested positive, but who had another disease. So, the actual number of people with coronavirus is higher.

97 deaths of residents in medico-social establishments, in Eure-et-Loir

394 people have died in their host institution since the start of the crisis, including:

The figures mentioned may change downwards, the establishments being able to make retrospective corrections.

The ARS announces, this Friday evening, that 2.253 people, who were cared for in hospitals in the region, have returned to their homes. These figures relate to patients who have been hospitalized for Covid-19 and returned home due to the improvement in their state of health.

3 people in intensive care in Eure-et-Loir

The ARS lists 9 people currently in intensive care in the Center-Val de Loire region, including 3 patients in Eure-et-Loir.

The Regional Health Agency (ARS) announces, this Friday evening, that 195 new additional cases of coronavirus have been confirmed in the Center-Val de Loire region between July 27 and August 2These figures communicated by the ARS are based solely on the results of biological PCR (polymerase chain reaction) tests.