Netflix: ‘The Lovebirds’ – Cupid just shot down a cyclist

“The Lovebirds” has been waiting for a while. Scheduled initially for a theatrical release, Paramount will finally have distributed its comedy on Netflix after the events related to the coronavirus. A comedy tinged with convoluted murder and a couple on the verge of a nervous breakdown available today on Netflix.

It starts after a classic row and then everything goes to pieces, it’s been a while since Jibran’s couple (Kumail Nanjiani) and Leilani (Issa Rae) bat wing. When they go to friends’ house, and after having decided to separate, their vehicle hits a cyclist, a stranger takes their car and now they are the main suspects in a murder they have not committed. Immersed in a crab nest that involves a cult and worldly orgies of an “Eyes Wide Shut” kind, the circle goes beyond them and instead of simply turning to the police, the duo prefers to take charge of the matter. Enough to bring the couple together! 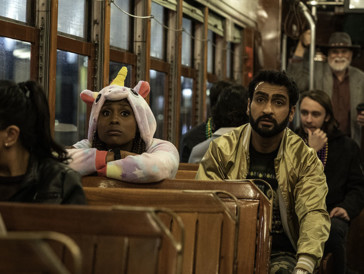 A couple who refreshes the standards of comedy worn by the stand-up star Kumail Nanjiani and his screen partner, the excellent Issa Rae who also operates as an executive producer; “The Lovebirds” is one of those lovely feel good comedies. A bit bric-a-brac, of a delicate naivety, tender with its history and its protagonists, not sure that the feature film by Michael Showalter be nominated for the Oscar for Best Screenplay, as was his previous “The Big Sick” (written by Kumail Nanjiani), however “The Lovebirds” will have something to seduce.

“The Lovebirds” (re) plays the beloved genre of antiheroes.– Theo Metais

His dialogues, his sitcom; the recipe is as classic as always welcome, when two loosers pretend to be super-agents and bypass the police, “The Lovebirds” (re) plays the range of the beloved genre of antiheroes. And our two stooges to be impeccable. Without fail to tackle the “idiocracy” inherent in a certain too conservative white America, “The Lovebirds” wraps itself up and mocks its era for finally a nice appointment on Netflix. A variation on love and relationships, two lovebirds reap the great adventure to counter what routine has imposed on them.

Laid back and light, feel good and sprinkled with a criticism of America, the comedy of Michael Showalter will surprise and catch its audience. Without ever revolutionizing the genre, “The Lovebirds” reveals a beautiful alchemy between its actors for a comedy that works.

“The Lovebirds” is available today on Netflix.

This may also interest you:

Share
Facebook
Twitter
Pinterest
WhatsApp
Previous articleThe IOC talked about the special conditions for the Olympics in Tokyo: Summer sports: Sports: Lenta.ru
Next articleThe day that Diego Milito conquered Europe with his goals and the help of Zanetti, Samuel and Cambiasso

What is true and what is false in the...
Read more
Entertainment

Universal Orlando will reopen in June

Yesterday, 14:54An opening in small steps, close agreements with the EU partners - and...
Read more

palm oil, miners exploited and pollution in a sustainable fund