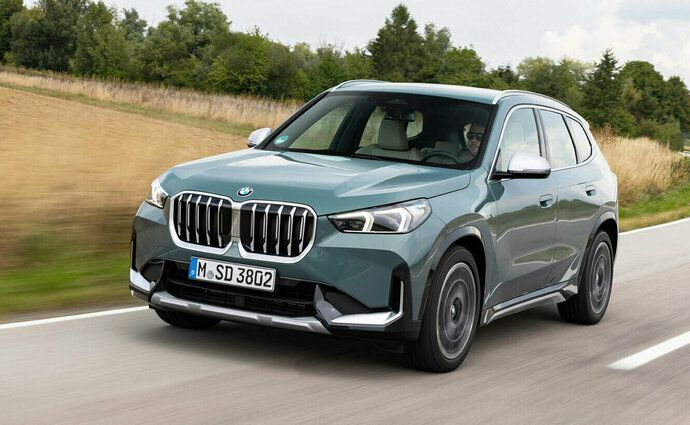 The entry of the new, third generation BMW X1 on the Czech market is fast approaching. Before you start meeting the car on the roads, we bring you a rich gallery of new photos and videos as an addition.

The third generation BMW X1 was presented on June 1 this year, including the purely electric version of the iX1, which appears in this model line for the first time. The design of the novelty approached its larger siblings X3 a X5 and the car has matured a bit. When designing the appearance, great emphasis was also placed on aerodynamics, thanks to which the novelty, with a coefficient of aerodynamic resistance of 0.26 according to BMW, ranks at the top of its segment.

For the third generation of the X1 model, the Munich brand has now released another series of photos, which we bring to you in the gallery of this article. Together with them, a set of videos was released, which we include in the article. In addition to photos and videos, let’s remind you that the BMW X1 has grown with the new generation. The length has grown to 4,500 millimeters (+ 53 mm), the width now measures 1,845 mm (+ 24 mm), the height 1,642 mm (+ 44 mm) and the wheelbase has stretched to 2,692 mm (+ 22 mm).

According to BMW, the larger external dimensions should be positively reflected in the space for the crew and luggage. The driver and passengers should have more room for shoulders and elbows, while the luggage compartment has swelled by 35 liters to the resulting 540 liters, respectively by 50 liters to 1,600 liters with the rear seatbacks folded down. These are divided in a ratio of 40:20:40 and versions with combustion engines are equipped with a rear bench with the possibility of sliding in the longitudinal axis.

Following the example of its other siblings, the BMW X1 gets a curved display in front of the driver, which actually consists of two screens – a 10.25-inch replacement instrument panel and a 10.7-inch infotainment touchscreen. The new hardware also brings with it new software, and the X1 received the brand’s latest iDrive OS8 operating system. There are also USB-C ports or smartphone screen mirroring support.

The body of the BMW X1 is stiffer compared to its predecessor, and the modified chassis promises higher stability in a straight line and better feedback. All versions of the novelty, regardless of the engine, have a rear multi-element axle, which is supposed to ensure sporty driving characteristics and confidence in corners. In addition to a sportier appearance, the BMW X1 should also be more comfortable, thanks to new shock absorbers with variable characteristics. The electric iX1 xDrive30 is already equipped as standard with an adaptive M chassis (including sports steering), which is available for other versions for an additional fee.

The available motorisations rely heavily on electrification, which means 48V mild-hybrid technology for more powerful internal combustion engines. This also means the offer of two plug-in hybrid versions and one purely electric. The BMW X1 will be launched on the Czech market with a pair of gasoline and a pair of diesel units, all of which are equipped with BMW TwinPower Turbo technology and a seven-speed dual-clutch Steptronic transmission. Depending on the motorisation, the front or all four wheels are driven.

The basis of the range of gasoline engines is the in-line three-cylinder in the sDrive18i design. It will offer 100 kW, 230 Nm and front-wheel drive. Four-wheel drive is the prerogative of the more powerful xDrive23i with a power of 160 kW and a torque of 360 Nm, which is equipped with a mild-hybrid four-cylinder. Combined consumption should be 7 liters per 100 kilometers for the smaller engine, or 7.2 l/100 km for the larger one. The diesel engines are four-cylinder in both cases – sDrive18d and xDrive23d. Again, the weaker engine (110 kW/360 Nm) is front-wheel drive, the stronger (155 kW/400 Nm) four-wheel drive with a mild-hybrid. Their consumption should be 5.5 l/100 km for the weaker and 5.3 l/100 km for the stronger engine.

See also  here is the new eldorado of the Belgians

Plug-in hybrids and pure electric models are expected to arrive in November this year. In the case of hybrids, the basis will be a 1.5-liter three-cylinder connected to an electric motor with an output of 80 kW (xDrive25e) and 130 kW (xDrive30e). All four wheels are driven, while the weaker version will offer a maximum combined power of 180 kW and a torque of 477 Nm. The more powerful one should attract values ​​of 240 kW and again 477 Nm. In both cases, BMW promises a purely electric range of up to 89 kilometers, while CO emissions2 should be kept in the range of 17 to 24 g/km.

The purely electric BMW iX1 xDrive30 has two electric motors, each on one axle, with a combined output of 230 kW and a torque of 494 Nm. The battery with a capacity of 64.7 kWh is stored in the floor and allows you to drive up to 438 kilometers on a single charge. The combined consumption of electrical energy should be between 17.3 and 18.4 kWh/100 km. The electric iX1 can handle charging with a power of 130 kW, when the battery is charged from 10 to 80% in 29 minutes. Ten minutes of charging should bring up to 120 km of range.

Sales on the Czech market will start already at the beginning of October 2022, while the aforementioned quartet of combustion engines will be offered. In November, two more internal combustion engines will arrive (petrol sDrive20i and diesel xDrive20d), both plug-in hybrids and the electric iX1. The prices of the first four versions on the Czech market will look like this: