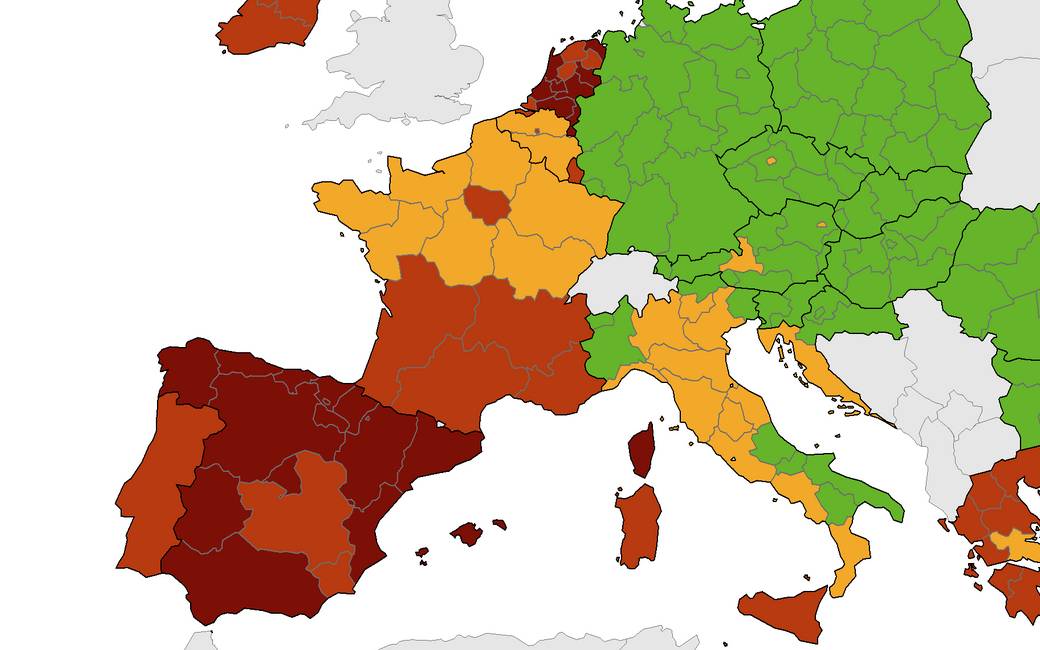 MADRID – As every week, the European Center for Disease Prevention and Control (ECDC) on Thursday adjusted the map of Europe, which shows green, red and orange colors indicating the corona situation in areas or countries. Countries such as the Netherlands and Belgium base their travel advice partly on this map and the information from ECDC.

It European Center for Disease Prevention and Control updated the map on Thursday, July 29, showing the combined indicator of a 14-day report rate, test rate, and test positivity as updated on July 29, 2021. THIS WEBSITE you can see the map and the indicators regarding the colors green, orange, red and dark red or gray.

No area/region has the color ORANGE or GREEN got.

The Netherlands is also increasingly colored DARK RED on the map and the provinces of Limburg (NEW) North Holland, South Holland, Utrecht, North Brabant, Gelderland and Overijssel have kept or acquired the dark red color. Zeeland, Drenthe, Friesland and Flevoland will continue to keep the color RED. The netherlands have last tuesday 27 july adjusted the travel advice and given all EU countries the color YELLOW or GREEN, which means that the Netherlands deviates from the ECDC map with colours.

The Flemish and Walloon regions still have the color ORANGE except for the Brussels-Capital Region, which was again given the color RED on 22 July. In principle, Belgium looks every Sunday at the list of countries and the color codes that they have received from the ECDC on Thursday. Green and orange changes will then be entered from Monday, and if an area/region or country changes to red, it will be entered on Wednesday. Sometimes in Belgium people deviate from this and changes are already indicated on Friday.