Two days from have been admitted to the intensive therapy area of ​​the High Complexity Medical Institute of Rosario de Lerma, after having tested positive for coronavirus, Chaqueño Palavecino’s picture evolves favorably. According to the latest medical report that was released this Sunday through his social networks, the musician “is stable.”

“The Chaco Palavecino he spent the night well and shows slight improvements in all vital parameters. He is stable, and little by little improving. He is still hospitalized in the therapy area and carrying out the same treatments indicated by the medical staff that began on Friday, ”the statement reads.

Also, given the versions that were circulating in recent days about the health of the renowned artist, those in charge of his press announced that they will continue to inform their public about the evolution of his health and asked “not generate or circulate erroneous communications that generate concern”.

“We thank everyone for caring about the health of the Chaqueño and for all the messages, prayers and good energies that they send you”, Concludes the writing. 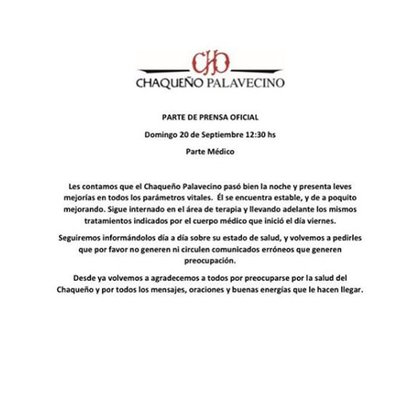 The 60-year-old singer from Salta announced that he had been infected with coronavirus on September 12, after confirming that he was not going to be part of the National Nut Festival via streaming. From their environment they said that at first had had mild symptoms, such as a cough and an itchy throatFor this reason, a swab was performed, which confirmed that he had COVID-19.

The first days the disease passed with the same symptoms, resting and isolated at home, without major worries. He even allowed himself to make a kind of joke during an interview with Chain 3: “I was always isolated, with a lot of wine and barbecue here in my house (lives in a rural area, in Rosario de Lerma). But today things are complicated, here in Salta it is a danger ”.

“I took great care of myself but this bug cornered me. There is no need to fear, you have to be careful nothing else. I take great care of him and I am doing everything the doctors tell me. I’m not afraid of him at all. But I do pay attention. Doctors say that most of us will go through this and it seems that way. This bug is everywhere, ”he remarked.

However, as the days went by, the picture got worse: raised temperature for the first time and severe body aches and shortness of breath appeared. In the last hours of Thursday he had to be treated by doctors, who decided to transfer him to the High Complexity Medical Institute of the town of Salta to carry out some studies. 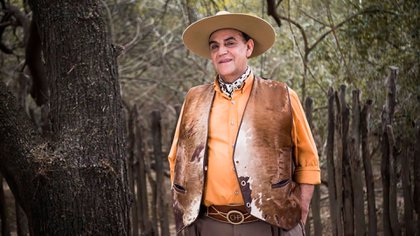 The renowned musician has been hospitalized since Thursday (Photo: Instagram)

A CT scan showed that He had a slight infiltration in the lung, which is why the health professionals, together with the musician’s family, decided that he should remain in intensive care. In any case, from the beginning they calmed their fans by ensuring that she was stable and that the measure was taken, mainly, as a precaution.

On the other hand, His close relatives, the people who live with him and some of his musicians were also swabbed., who visited him in the last month, especially when they began to rehearse for the aforementioned festival, of which Chaqueño Palavecino was finally unable to take part due to his health problems.

The discharge of Chaqueño Palavecino after being accused of mistreatment: “It is a pity that the beautiful has less weight than the bad”