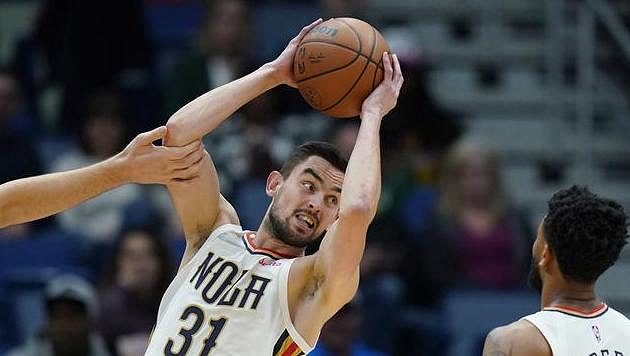 Czech quarterback Tomáš Satoranský in a match between New Orleans and the Los Angeles Clippers.

The leaders of the Golden State Warriors competition won 105: 102 in Detroit even without their star Stephen Curry, Brooklyn also won 115: 113 over Orlando without the absentee star Kevin Durant and took the lead in the Eastern Conference.

Since his summer arrival in New Orleans, Satoransky has only been on the bench and has not even intervened several times at the beginning of the season. Gradually, however, he gained the trust of coach Willie Green, and when he could not intervene in the game Devonte Graham today, the coach pointed to the Czech quarterback. Satoranský took advantage of the opportunity and defended his teammates well.

The Clippers took the lead by up to 18 points in the first half, but the Pelicans took a breath at the beginning of the second half, which was helped by Satoranský. He took turns leading 63:61. For the last three minutes, Satoransky went to help defend the double-digit lead, and the Clippers no longer scored.

“Today we have shown that we are growing up and improving. It was a really important match for us and I am proud of the boys. At the same time, this win means nothing if we do not follow up and continue to improve,” said Josh Hart, who contributed to the win. 19 points. The Pelican’s top scorer was Jonas Valančiunas with 26 points and 13 rebounds.

See also  The Olympics surpass the NBA for me. Veselka had a great time, Satoranský admitted and talked about the fairy tale

Due to minor health problems, the two best shooters of the competition, Stephen Curry from Golden State and Kevin Durant from Brooklyn, rested. However, their teams managed without them, albeit only in the finals of the matches.

The Golden State led Detroit by as much as 16 points for most of the game, but the Pistons reduced to three points in the end and missed two final shots to equalize. The Warriors scored a single point in the last three minutes. But that was enough for them to win. Jordan Poole had the main share in it with 32 points. Andrew Wiggins added 27 points.

Brooklyn went even harder to win without Durant, losing 19 points to Orlando in the first half. At the beginning of the second half, however, he turned the score around quickly and maintained a modest lead, which the Nets kept in the final thanks to the experience of LaMarcus Aldridge and James Harden, who collected 36 points, 10 rebounds and 8 assists. Aldridge scored 11 of his 15 points in the last eight minutes.

The Los Angeles Lakers did not help avert a third loss in a row or the return of LeBron James after an eight-game break due to injury. The Lakers lost to Boston 108: 130 as the Celtics pulled Jayson Tatum with 37 points. Lakers’ top scorer was Anthony Davis with 31 points, James added 23 points.

Phoenix has already won its eleventh win in a row, winning 112: 104 over Dallas. For the Suns, it is the longest winning streak in the last 15 years. Chris Paul contributed 18 points and 14 assists to the win. Dallas missed Luka Dončič.

See also  The UN calls for dialogue with the Taliban

Defenders of the Milwaukee title won 96:89 over Oklahoma City. Janis Adetokunbo scored 21 points, 19 rebounds and 7 assists. The Czech national team member Vít Krejčí did not play for Thunder, today he will have another match for the reserve team in the G-League.