The usual rationale behind official attempts to sidestep or ignore scientific evidence is populist discourse. “Populism” is a controversial term, but all the meanings of it coincide in at least one point: populism tends to separate the population of a country between the “people” (in the singular), and some “elites” that control the government. and the economy for their own benefit.

Once this separation is established, the populist leaderships establish themselves as the only legitimate representative of the “people”. I clarify that, in my opinion, a good part of the criticism against these elites (or whatever I prefer to call them) is valid. But that’s another discussion (which we explored in previous articles).

Sometimes the academic community is included by the populist discourse among the elites who have to be displaced from positions of power. Partly because its members are considered intellectuals at the service of the status quo (as when López-Obrador declared in Mexico “that the State no longer protects writers, that there are no organic intellectuals”). But, and fundamentally among right-wing populists, academics are also considered political rivals when (paradoxically) their research affects the interests of the business elites that support them (such as the hydrocarbon and coal industries, in the case of Trump, or the agricultural business community, in the case of Bolsonaro).

For reasons like these, they are often hostile to the knowledge generated by the scientific community. Thus, for example, during a debate among candidates for the Republican presidential nomination in 2007, three of the participants said that they did not believe in the theory of evolution. Trump, for its part, stated in 2012 that “The concept of global warming was created by and for the Chinese in order to make the American industry uncompetitive”(Presumably, they did it in collusion with the scientific community, whose investigations are what established the existence of the phenomenon). And, during the current pandemic, right-wing populists (like Bolsonaro and Trump), and from the left (like López-Obrador and Ortega), tended to ignore the recommendations of specialized scientists.

The director general of the World Health Organization (WHO), Tedros Adhanom Ghebreyesus, regretted Trump’s decision to stop the contributions of that country to the body, although he indicated that he hopes that this does not prevent the global fight against COVID-19. (Photo: AFP)

Just as populism tends to divide the country itself between the people and the elite, it also tends to divide the world between the nation itself and the threats that threaten it beyond its borders. Which makes it less likely to promote international cooperation. Hence, having the option of using the test offered by the World Health Organization (WHO) to diagnose the COVID-19, the administration Trump he preferred to develop his own test. Add to that the animosity of Trump towards multilateralism, and will have an explanation of their attitude towards WHO.

Just as there is no evidence to substantiate the claim that the Chinese government “created” global warming to harm US industry, there is no evidence of the alleged collusion between the Chinese government and the WHO to hide information about the origin and spread of the COVID-19 (In its initial stage, the Xi Jingping government did not even allow the entry of envoys from the WHO). That is to say, Trump withdrew financing to the WHO in the middle of a pandemic based on a conspiracy theory without waiting for any verification. And he did so at the same time that his country reached the world’s highest death toll from COVID-19 in a single day (2,228).

What is the coronavirus?

He coronavirus recently discovered causes the infectious disease coronavirus COVID-19. Both were detected after the outbreak that occurred in Wuhan (China) in December 2019.

Tiredness, fever, and a dry cough are the most common symptoms of COVID-19; however, some patients may have nasal congestion, pain, runny nose, sore throat, or diarrhea.

Although most patients (around 80%) recover from the disease without the need for any special treatment, around one in six people who get the disease COVID-19 you develop a serious condition and have trouble breathing.

To protect yourself and prevent the spread of the disease, WHO recommends washing your hands with soap and water or using an alcohol-based disinfectant that kills viruses that may be on your hands. In addition, a minimum distance of one meter should be kept from anyone who sneezes or coughs, because if you are too close, you can breathe in the droplets that harbor the virus COVID-19.

How long does the coronavirus survive on a surface?

It is not yet known exactly how long this new virus survives on a surface, but it appears to behave like other coronaviruses.

Studies indicate that they can survive from a few hours to several days. The time may vary depending on the conditions (type of surface, temperature or humidity of the environment). 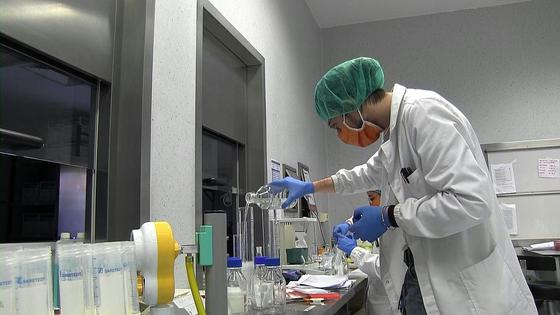 Italy is working against the clock to certify surgical masks. (AFP).