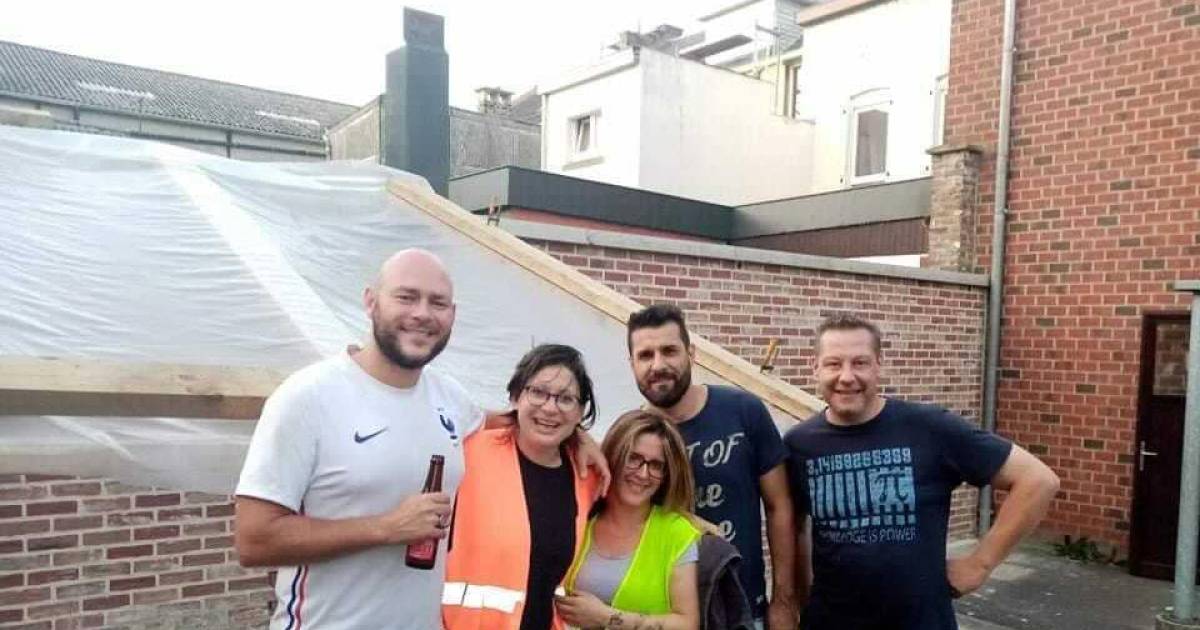 Nico, a 30-year-old Frenchman, put his tour of Europe project on hold for a few days to reach out to victims of bad weather. The young cyclist has become a volunteer while helping the inhabitants of the most affected areas in eastern Belgium. “We saw horrible things, but also wonderful things.”

During the floods last week, aid to victims came from the international. The French, Austrian and Italian rescue services were not the only ones to help the Belgian population. Foreign civilians have also shown a great outpouring of solidarity following the disasters that claimed the lives of 31 people. This is the case of Nicolas, alias Nico, 30 years old. The man from Metz was on a bike tour of Europe when, on Tuesday July 13, he stopped in Liège on the advice of a friend. When he left his luggage at the hotel, he had no idea what would happen to him the following days.


When I found out what was going on, I looked for a place where I could help.

Nico, Volunteer during the floods

“I arrived on Tuesday evening and had to continue my journey on Wednesday morning. But it was raining a lot so I had to stay at the hotel, ”recalls Nico. “When I found out what was going on in eastern Belgium, I started looking for a place where I could help.”

His sights were set on a center in Beyne-Heusay. On Thursday, he woke up, went to get some croissants and went straight to them. There, his first task was to sort the clothes that the generous donors had brought for distribution to the victims. Subsequently, he went with Salvatore, another volunteer, to Vaux, Chaudfontaine, Verviers, Pepinster and Chênée to bring food, but also to give a hand to the victims.

In the end, Nico, who had planned to leave Wednesday, Thursday maximum, resumed the road on Sunday. The French volunteer was to join a lady who rides for a non-profit organization which fights against breast cancer. To catch up, he exceptionally took the train.

From these few days with the volunteers and the people who have lost everything, he takes nothing but positive. “On a personal level, I don’t really know what these three days in Belgium have given me. But one thing is certain: it was the minimum I could do. For me, it was unthinkable to stay in my room or go to drink beers when there were people who were suffering, who had nothing left and needed someone to reach out to them. ” An act of kindness that is not isolated. In his youth, the young cyclist was already part of associations and regularly came to the aid of those who needed it most.

On a human level, his brief stay in Liège marked him. The Beyne-Heusay center was not governed by any official authority. There are therefore a dozen volunteers who have come together to organize the collection and distribution of donations. “We have created strong links and we are still in contact”, explains Nico, who is stunned by the outpouring of solidarity which has animated the whole country for almost a week: “It is in times of distress and chaos that we see the true nature of people. We’re here to help. We saw horrible things, but also wonderful things. ”


Now is the time to realize that you have to do things to take care of nature.

Nico, Volunteer during the floods

Now, Nico continues on his way. After having traveled all over France for the first time, circling Spain, passing through Italy, Switzerland and Belgium, he is getting ready to drive on the roads of France for the second time. His journey was to end in November or December, after nearly a year of solo travel on his bike. He threw himself into this challenge in February of this year, because he wanted to change his life, “to leave everything to find a certain form of freedom and to live simple things”.

Even if he moves away from Liège, he will not forget the few days he spent there. Until it is no longer necessary, he will continue to talk about citizens’ initiatives to help the victims of bad weather around him.

“Events like this can affect anyone, anywhere. The proof is in Belgium or Germany, regions which do not normally experience this kind of disaster ”, notes Nico. “We’ve been doing shit for decades and decades. Now is the time to realize that you have to do things to take care of nature. ”

Find here all the latest news from the Liège region.

Dan and his friends put themselves in danger to save lives in Chaudfontaine: “If I had to do it again, I would do it again”

The people of Liège stick together to face the floods

How to provide assistance to those affected by bad weather?