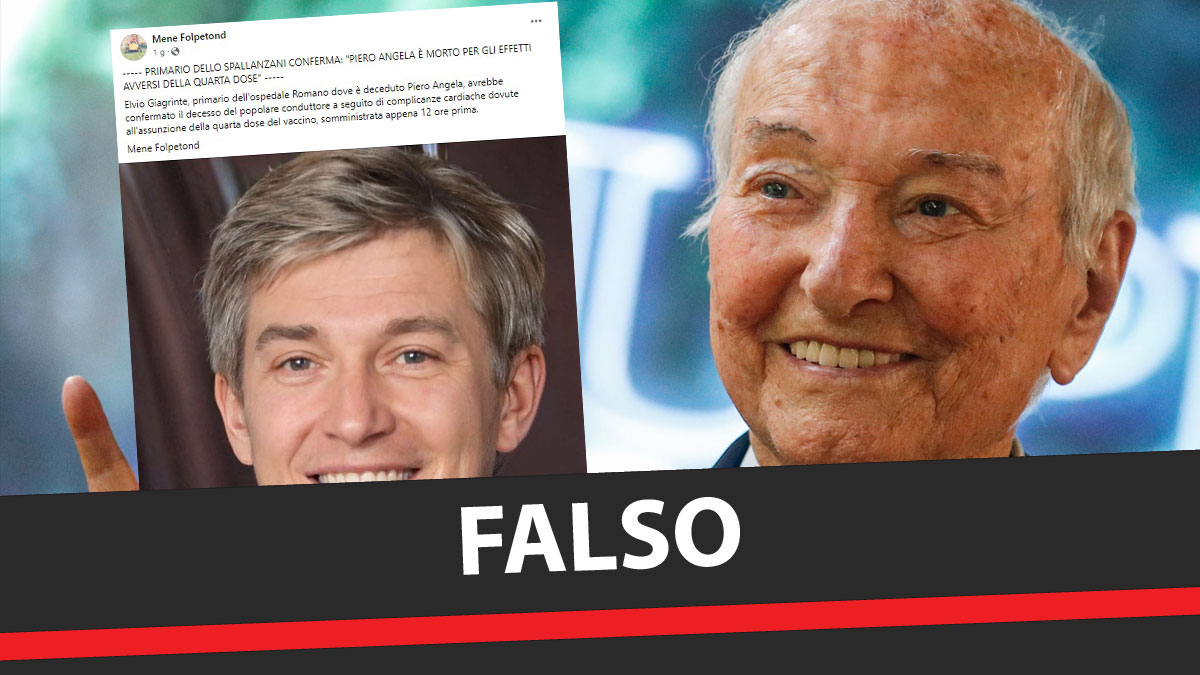 The recent demise of Piero Angelajournalist and science popularizer, has not gone unnoticed in the world of conspiracy and false news based on pseudoscience, unleashing several defamatory reactions. On August 15, 2022, a Facebook account published a post in which it stated that a primary of Spallanzani of Rome would have confirmed that “Piero Angela died from the adverse effects of the fourth dose”. This is a completely false news, created and spread in No Vax circles with the aim of making it viral.

For those in a hurry

—– PRIMARY OF SPALLANZANI CONFIRMS: “PIERO ANGELA DIED FROM THE ADVERSE EFFECTS OF THE FOURTH DOSE” —–

Elvio Giagrinte, head of the Roman hospital where Piero Angela died, would have confirmed the death of the popular conductor following heart complications due to the intake of the fourth dose of the vaccine, administered just 12 hours earlier.

Elvio Giagrinte does not exist

The post states that a head of the Roman hospital named Elvio Giagrinte would have confirmed the elusive reason for death. There is no primary of Spallanzani with that name, just as it does not appear within the database of the Order of Doctors. Carrying out a research online, the only results are those of Facebook shares in certain groups such as the one entitled “Left No Green Pass – No Born” e “We do not ask for the Green Pass“:

The publication is accompanied by a photo, which is actually false: it results in a false identity generated by a software that we have explained in a previous article. Just look at the position of the eyes, as a first clue, to spot this kind of fakes:

The account that spread the No Vax hoax, which exploits the death of Piero Angela, was released by a known user at Open Fact-checking. Before calling herself “Mene Folpetond” she called herself “Stefania Piccimni” and before that “Beatrice Juvenal”. The account url shows the same ID:

Among the profile photos we find the one previously used when the false name “Stefania Piccimni” was used.

The manager of the fake account has spread his hoax in the Facebook groups No Vax, conspiracy theorists and pro-Russian. Here is the sharing in the group “Covid19 vaccine side effects“:

Here is the sharing in the group “Health dictatorship“:

Here is the sharing in the group “We true Italian patriots with Russia, Putin in our hearts“:

Here is one of the spontaneous shares of the post, where the user comments like this: «ANOTHER RELATED !!!».

No doctor or head of the Spallanzani of Rome has released a statement regarding the death of Piero Angela linking him to the anti Covid-19 vaccine. This is a fake news created by a No Vax account, spread in the channels where disinformation on anti Covid-19 vaccines circulates.

See also  Shapovalov lands in Sydney: positive for Covid-19. He is in solitary confinement

This article contributes to a Facebook project to fight fake news and disinformation on its social platforms. Laws who for more information on our partnership with Facebook.