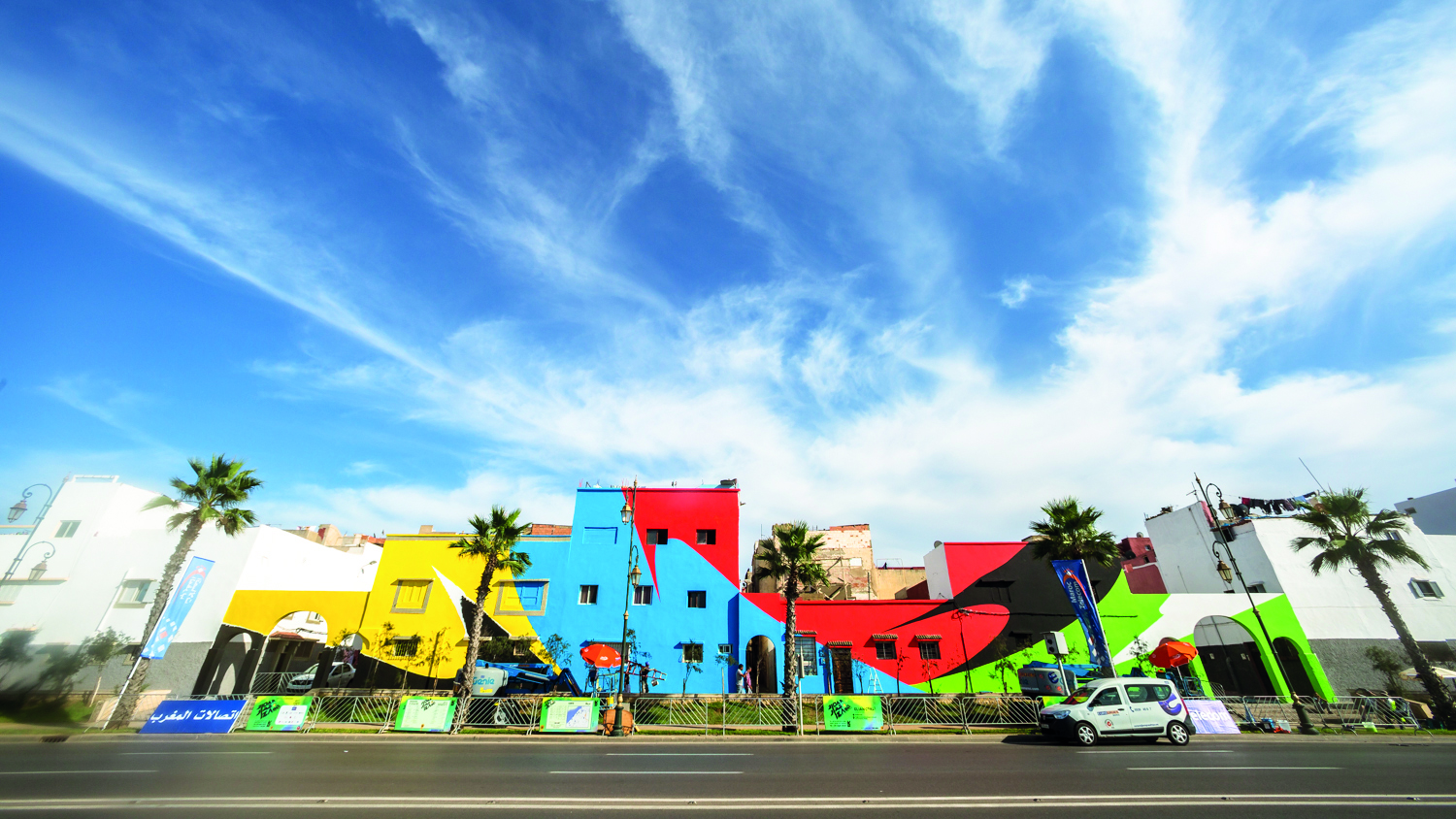 More than half a century after its discovery in the United States, forty years after its flourishing in Europe, Rabat celebrates it until September 26 on the occasion of Jidar-Rabat Street-Art Festival.

Rabie El Addouni, born in 1983 in Meknes, was the first to explode shapes and colors on national roads, retaining walls of railways, under bridges … He was fully expressed by a Latin lettering in 3D allied to Arabic calligraphy, which calls for figurative hyperrealism.

In 2008, Rabie was the first representative of Moroccan urban art to benefit from an individual exhibition at the Croatian embassy in Rabat, and his works were presented as an invitation to travel; a clear, luminous, rich, inexhaustible work. He also participated in 2012 in an important collective exhibition at Casa Africa, in Las Palmas. This true legend, with a cosmopolitan culture, died in a car accident in 2013.

The breach being open, other names are joining the ranks, brightening up with their new know-how walls, facades or electrical transformer station. Among them, Morran Ben Lahcen, alias Morran BLC. Represented by the prestigious Bloch Gallery, he now only devotes himself to his research – extensive – in contemporary art and prefers to draw a veil rather than decline more on this part of his life. Rebel Spirit – Mohamed El Bellaoui, in civilian life – is also a veteran. Before he puts them in his emblematic comics, wisely titled Les Casablancais, its characters with pop illustrations were first brushed on the walls of its tough metropolis.

But when the wave recedes, it will take away many fragile glories. Only a few were able to float. Another veteran is Majid Elbahar, aka Majic Joe. By taking an interest in the NBA, he immersed himself in the American black culture, and discovered by the circumstance the hip-hop culture. Self-taught and having never been through graffiti, he sing his art in a figurative muralist register. Also, who among us has never seen or read «Trick 45», this inscription which is constantly repeated in the four corners of the cities, planted everywhere in Casablanca, Tangier, Marrakech …?

His dispenser is one of the brilliant and discreet Moroccans to fit fully into the Western tradition of the protest graffiti. His minimalist graffiti is carried by a writing with an elaborate aesthetic, without, however, caring about graphics performance. Affixing his blaze, discreetly and mysteriously, in the most impossible places and times, this inhabitant of Mohammedia acts both artistic and rebellious against the established order …

From tag to Street art, including graffiti

From shy, and let’s say the word, cautious, at birth, the movement will continue to grow. Everywhere in Morocco the taggers, graffiti artists, stencils and other followers of the aerosol spray as primroses in spring pushed, to the point of becoming innumerable in the full sense of the term. They invaded without fear or reproach, colors in hand, esplanades, alleys of public gardens, passages of buildings and undergrounds, in defiance of the police who were careful to drive them out.

This means that there were Street artists, but there was not yet an urban art assuming its destiny and imposing its lines of demarcation. Did we have to wait until 2013 for the Street sauce to really take? Salvation will come from the EAC-L’Boulvart (Artistic and Cultural Education), an association of avant-garde values ​​aiming to show what is done best in terms of current music and urban culture in Morocco. With her, the genre really takes off by fomenting, in Casablanca, Sbagha Bagha, given for the first time in the form of a Street Art session on the sidelines of the fourteenth edition of L’Boulevard festival. The first attempt was a master stroke. From then on, we stick together, we multiply the frescoes, embellishing the public space from top to bottom. This is how Rabat was asking for a similar festival, especially since the city wanted to be revitalized, because it was not well off in urban artistic performances. This was done in 2015 with the help of the National Museum Foundation, as part of the program “Rabat city of light, Moroccan capital of culture”.

The festival succeeds hands down its baptism of fire. It followed success after success, to such an extent that it rose to the rank of unmissable events of its kind on a global scale. With each new season, its share of gigantism. For ten days, a string of Street artists, from here and from garlictheirs, come to detect the intense vibrations of the city as well as of its inhabitants to lock them in time on the wall support. Since its baptism of fire, the cosmopolitan capital has welcomed no less than eighty artists; which allowed the transformation of some sixty facades cleverly dispersed throughout the city. There are very beautiful monumental murals there, with a very mastered aesthetic, and which are for the most part figurative, if it is not a question of abstraction.

“We are no longer in front of an underground tag – a bomb and a wall”, let us know an amateur. We find ourselves in front of works that radiate grace. Happy rbatis who have to put in their mouths a piece of choice, the sixth edition of Jidar-Rabat Street Art Festival (formerly Jidar, street paintings). Postponed last year, now offered, it returned to transform, until September 26, the capital for its salvation and our happiness, into what intensifies its pleasure, an open-air museum. To be continued !!