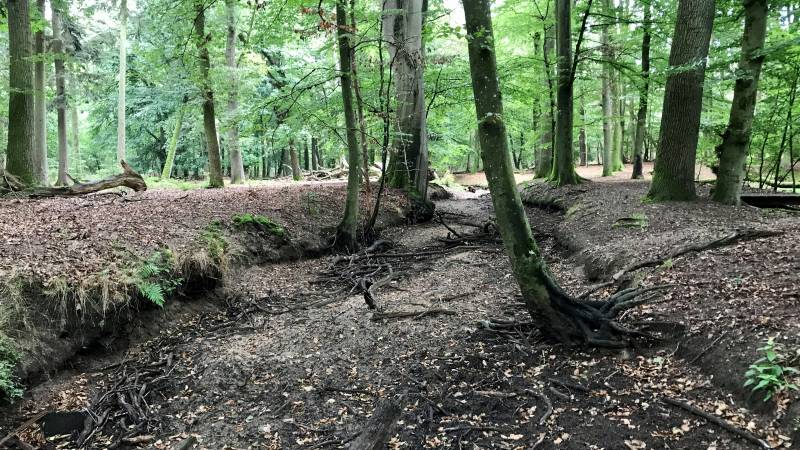 The Veluwe is getting drier every year. And that is striking, because the nature reserve is one of the wettest areas in the Netherlands. “The water balance in the Veluwe is out of balance,” says Maarten Veldhuis of the Vallei en Veluwe Water Board. “More water leaves the area per year than is added in rainfall.”

On the Veluwe there is an average of 10 percent more precipitation than in the rest of the Netherlands, NOS weather forecaster Peter Kuipers Munneke explains. “That’s about 100 millimeters per year. And yet it is a huge battle not to let the area dry out.”

Drought due to forest complex, industry and polders

“The Veluwe was very barren for hundreds of years, during the Middle Ages,” says Veldhuis. “It was heather and sand and some old, beautiful forests. That evaporated much less than the large forest complex that we now have in the Veluwe. Today, three times as much water evaporates as before. That is no longer supplemented by the groundwater. The freshwater supply in the Veluwe is also being used for drinking water and industry.”

The polders that have been created in the Zuiderzee and Flevoland also extract a lot of water from the area. The water is pumped out to enable agriculture and habitation. Climate change also adds to this. “It is a big task to restore that balance,” says Veldhuis.

To solve the drought problem, the area must regain its natural sponge function, for example by creating swamps and natural forests. Efforts are also being made to retain more water from the Leuvenum brook in the Veluwe and to prevent it from flowing into the IJsselmeer.

Peter Kuipers Munneke: “It is expected that in the future dry areas will become drier and wet areas wetter. In winter, precipitation in the Veluwe area will continue to increase, also in the coming century. In a sense, there is still hope for Veluwe .”