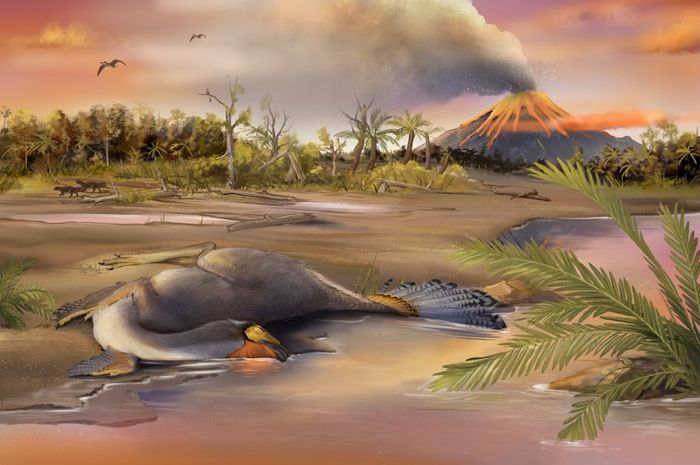 A well-preserved reconstruction of the Jehol Biota and specimens of Caudipteryx.

Nationalgeographic.co.id—A team of scientists have isolated well-preserved cartilage cells in dinosaur 125 million years old from Northeast, China. These cells are known to contain a cell nucleus with remnants of organic molecules and chromatin. The study was published in the prestigious journal, Nature Communications Biology on September 24, 2021.

The team of scientists from the Institute of Vertebrate Paleontology and Paleoanthropology (IVPP) of the Chinese Academy of Sciences and from the Shandong Tianyu Museum of Nature (STM) have extracted a piece of distal articular cartilage from a dinosaur specimen. The specimen belongs to a dinosaur called Caudipteryx, is a small omnivore the size of a peacock with long tail feathers. It roamed the shores of the shallow lake Biota Jehol in Liaoning province during the Early Cretaceous period.

“Geological data have accumulated over the years and show that the preservation of fossils in the Jehol Biota is remarkable due to the fine volcanic ash that buried the carcasses and preserved them down to the cellular level,” said Li Zhiheng, Associate Professor at IVPP and co-author of the study in a release from the Chinese Academy of Sciences.

In the study, the scientists extracted a piece of distal articular cartilage from the specimen’s right femur. The researchers then decalcified them using different microscopes and chemical methods to analyze them.

The researchers realized that all the cells had been mineralized by silicification after the dinosaur’s death. This silicification is most likely what allows the excellent preservation of these cells.

They also found two main types of cells: cells that are healthy at the time of fossilization, and cells that are not very healthy that are porous and become fossilized when they die. “It is possible that these cells died even before the animal died,” said Alida Bailleul, Associate Professor at IVPP and author of the study.

Cell death is a process that occurs naturally throughout the life of all animals. But being able to place a petrified cell into a specific place in the cell cycle, is something fairly new to paleontology. This is one of the goals of IVPP scientists, namely to improve cellular imagery in fossils.

Next, the team isolated several cells and tagged them with chemicals used in biology laboratories around the world. This purple chemical, called hematoxylin, is known to bind to cell nuclei. After staining the dinosaur material, one dinosaur cell showed a purple nucleus with some dark purple threads. This means that a 125-million-year-old dinosaur cell has a well-preserved nucleus that retains some of the original biomolecules and their chromatin threads.

The chromatin in the cells of all living organisms on Earth is made up of dense DNA molecules. The results of this study thus provide preliminary data showing that remnants of the original dinosaur DNA can still be preserved. But to test this precisely, the team needed to do more work and use a much more subtle chemical method than the stain they currently use.

Also Read: Did Dinosaurs Get Sick And Hurt Like Humans?

“To be honest, we were obviously interested in fossilized cell nuclei because this is where most of the DNA would have been if DNA was preserved,” said Alida Bailleul.

Last year, Bailleul published another study reporting the preservation of the cell nucleus and extraordinary biomolecules in dinosaur cartilage cells from Montana, United States. “So we have good preliminary data, very interesting data, but we’re just starting to understand cellular biochemistry in very old fossils at this point, we need to do more work.”

Also Read: Four dinosaurs found in Montana, one of which looks like an ostrich

In ancient DNA assemblages, sequencing methods are used to confirm whether ancient DNA is preserved in fossils. So far, this method has only worked for young fossils (not much older than about a million years). But it never worked for dinosaur specimens. Dinosaurs were thought to be too old to retain any DNA. However, the chemical data collected by scientists from IVPP and STM suggests otherwise.

The team insisted that they needed to do more analysis and even develop new methods to understand the processes that enabled the preservation of biomolecules in dinosaur cells. That’s because no one has managed to sequence any dinosaur DNA to date.