PEC Zwolle communicates return to Ajax and end of career 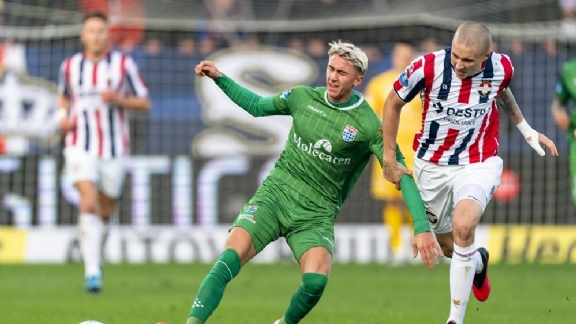 PEC Zwolle says goodbye to the mercenaries Dennis Johnsen and Rico Strieder, who return to Ajax and FC Utrecht respectively. In addition, PEC Zwolle reports on Wednesday that Etiënne Reijnen immediately puts an end to his active career. The defender still had an ongoing contract until mid-2021, but due to a lingering ankle injury, the routine feels compelled to quit as a professional footballer.

Johnsen, who arrived on a rental basis in Zwolle last year, came to 2 goals and 3 assists in 25 games on behalf of PEC before the corona crisis. It is not yet known when he will report to Ajax again, where his contract will continue until the summer of 2021. Strieder joined in January and leaves the club with six appearances to his name. The leadership of PEC already said goodbye to Rick Dekker, Lennart Thy, Jarni Koorman and Stanley Elbers at an earlier stage.

Reijnen continues with the scouting team at PEC, while he also wants to get his trainer papers. “I had a great time as a football player in Zwolle. It is not without reason that I returned to this club last summer after many wanderings at home and abroad,” Reijnen explains his decision. “Most of my matches for Zwolle I played in the Jupiler League. It was therefore extra special to be able to play football with this club in the Eredivisie. Where I used to play for three thousand people in the early years, the stadium was Sold out several times with 14,000 supporters over the year, which is great to see how the club has grown in the meantime. ”

Reijnen last played for PEC in August last year due to injury. “Unfortunately, the counter was stuck at only four games last season. I have had to watch many games from the side, something that you try to prevent as a footballer as much as possible. Making the decision to stop definitively has certainly not been an easy decision for me , but the only right one. Still, I can look back with pleasure on all these years here in Zwolle and I am happy that I will continue to be involved in my club in a different role next season. ” Reijnen came to 144 duels for PEC over two periods. He also played for AZ, SC Cambuur, FC Groningen and Maccabi Haifa.

Does Dennis Johnsen deserve a new chance at Ajax?

Just a few hours ago, Mennel Ibtissem unleashed a buzz on social networks, by...
Read more

Minister of Agriculture and Forestry Bekir Pakdemirli stated that they will provide a total...
Read more

"There is a decrease in the circulation of the virus in 3 departments (Gers,...
Read more