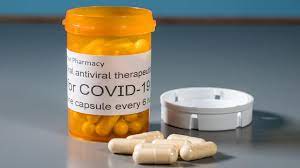 The American pharmaceutical giant Pfizer announced on Monday that it had started a large-scale clinical trial for its anti-Covid pill, to test its ability to preventively reduce the risk of infection in those around a person who has contracted the disease. .

Several companies, including Merck and Roche, are working on drugs of this type, called antivirals. They work by preventing the virus from replicating itself.

Their application can be twofold: both to allow people already suffering from the disease not to suffer from serious symptoms, but also to those who have been in close contact not to develop it.

If the results are conclusive, “we believe this treatment could help stop the virus very early, before it has a chance to replicate widely, potentially preventing symptomatic cases of the disease in those who have been exposed and slowing down the onset of infection in others, ”said Mikael Dolsten, chief scientist at Pfizer, in a statement. This approach is “complementary” to anti-Covid vaccines, he added.