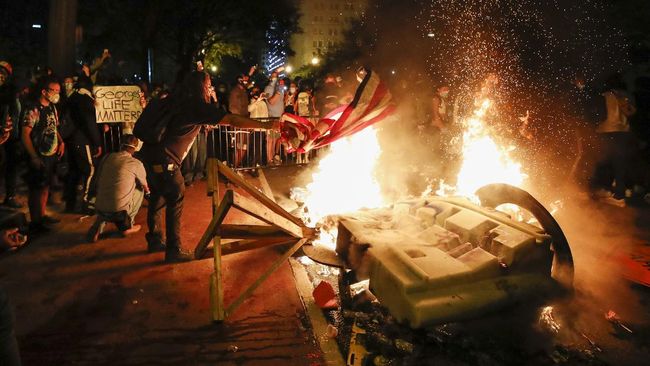 Jakarta, CNBC Indonesia– Protests have erupted in the US state of Wisconsin after police shot a black man multiple times. The man named Jacob Blake is in a serious condition at the hospital.

As quoted by the BBC, a video that went viral on social media showed Blake being shot in the back as he tried to get into a car in the town of Kenosha.

Authorities in Kenosha declared an emergency curfew after rioting broke out after the shooting. Hundreds of people lined up at the police headquarters on Sunday night. Vehicles were set on fire and protesters shouted “We will not back down”.

In a public safety alert, police urged businesses open 24 hours to consider closing down due to “numerous” calls about armed robbery and gunfire.

Officers used tear gas to try to disperse hundreds of protesters opposing the region-wide curfew, which is in place until 7am on Monday (12:00 GMT).

Wisconsin Governor Tony Evers condemned the shooting of Blake, who was reportedly unarmed.

“While we don’t have all the details yet, what we know for sure is that he was not the first black person to be shot or wounded or killed mercilessly at the hands of individuals in law enforcement in our state or our country,” he said in a statement.

“I have said all along that although we must offer our empathy, what is equally important is our actions. In the coming days, we will sue elected officials in our states who have failed to recognize racism in our states and countries for too long. . “

Jacob Blake’s name trended on social media and thousands of people signed a petition calling for the officers involved to be charged.

The shooting comes amid growing tensions in the US over racism and police brutality following the death of African-American George Floyd earlier this year.