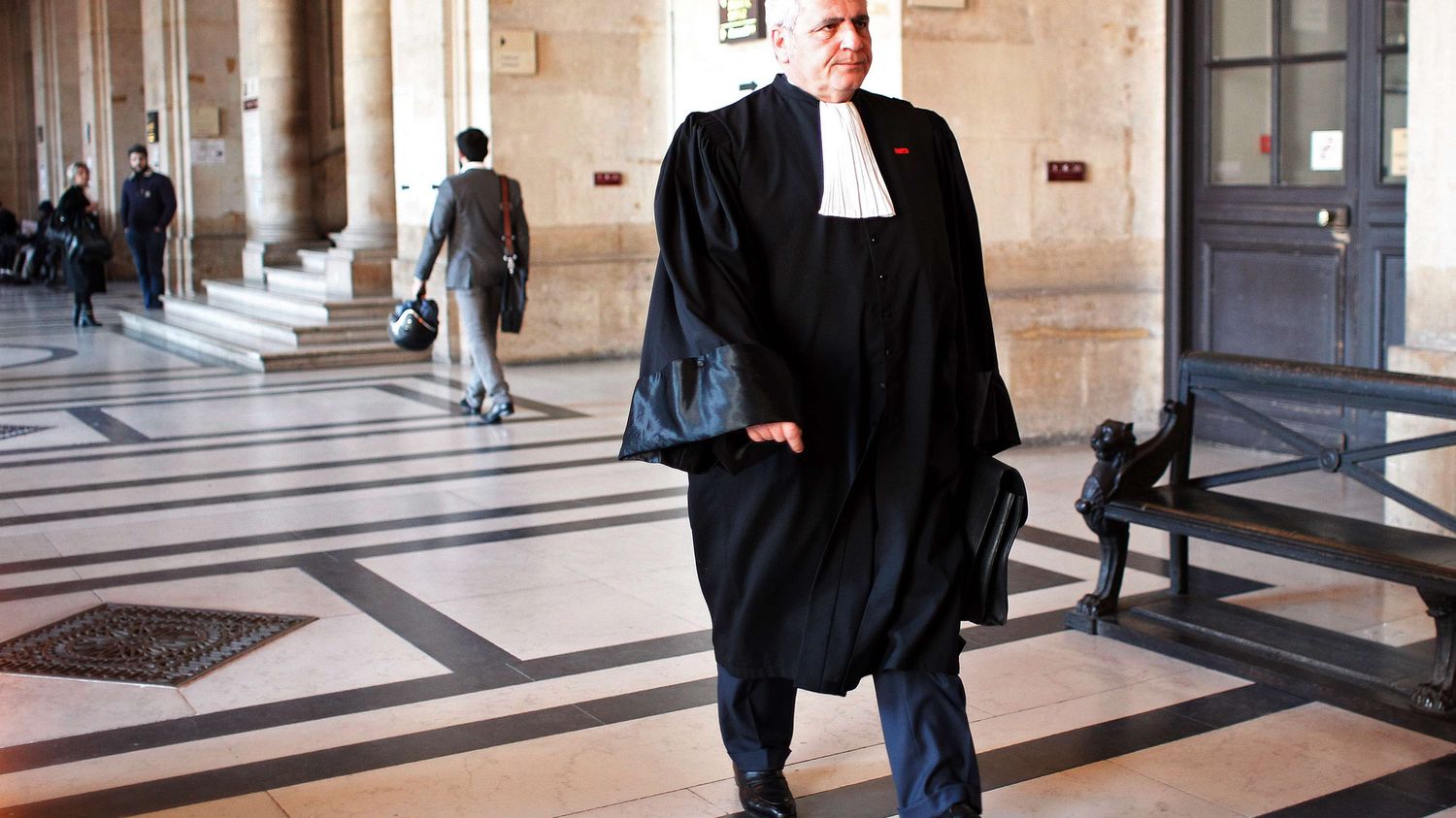 The scene takes place on July 2, 2009. It takes place in the village hall of the Elysee Palace, of which Nicolas Sarkozy is, at the time, the tenant. Among the many lawyers present, are the best known and the most famous on the Place de Paris: Eric Dupond-Moretti, Hervé Temime, Jean-Louis Pelletier, Pierre Haïk … But it is towards another tenor of the bar that the President of the Republic advances: swe lawyer and devoted companion, Thierry Herzog, on whose jacket il pins the rosette of the Legion of Honor. “It was a curious mixture. A synthesis between the solemnity and the relaxed character that Nicolas Sarkozy was able to give to the moment”, remembers the penalist Jean-Yves Le Borgne. His colleague Gilles-Jean Portejoie describes “an exceptional moment”. “That day, Thierry Herzog was beaming. He was enjoying happiness. I felt a spontaneous, reciprocal affection between the two men”, says the former president.

A little over 11 years later, Nicolas Sarkozy and Thierry Herzog find themselves side by side on the bench of the defendants, within the confines of the Paris judicial court. From Monday November 23, they are judged for “corruption” and “influence peddling” in front of the 32nd correctional chamber. Thierry Herzog is also fired for “violation of professional secrecy”, like Gilbert Azibert, former high magistrate at the Court of Cassation. This trial is that of the wiretapping affair, also known as the “Paul Bismuth affair”. Based on telephone conversations between the former head of state and his lawyer, investigators suspect Nicolas Sarkozy of having attempted to obtain secret information from Gilbert Azibert, through Thierry Herzog. in proceedings concerning him, on the fringes of the Bettencourt case. And this, in exchange for a boost for a position in Monaco.

Between the lawyer and the former president, the friendship has lasted for 40 years. Thierry Herzog and Nicolas Sarkozy, born in 1955, meet at the beginning of the 1980s, when they are honing their skills as young lawyers. The first begins in the office of Jean-Louis Pelletier, defendant of thugs and counsel to Jacques Mesrine. The second animates the campaign of his boss, Guy Danet, candidate for the batonnat of Paris, and trains his friend. They also spend their summers in La Baule (Loire-Atlantique), where their families go on vacation. And share a passion for the French variety: Serge Lama, Didier Barbelivien, but also and especially Johnny Hallyday, to whom Thierry Herzog devotes a true cult. A strong relationship is formed.

There is a real admiration of Thierry Herzog for Nicolas Sarkozy.

“Admiration is the right word, approves the former minister Brice Hortefeux. For everything Nicolas Sarkozy is and what he represents. The two men share great mutual trust because Thierry Herzog has a whole character. “ He is one of the former head of state’s close friends, those who share the good times – he was at Fouquet’s in 2007 after his presidential victory – like the bad ones.

In 2006, Nicolas Sarkozy joined as a civil party in the Clearstream affair. He asks Thierry Herzog to represent him. “Nicolas told me: ‘Listen, my Thierry, it’s the lawyer I choose, not the friend. You don’t have to say yes right away'”, he relates in Release, in the fall of 2013. No question of refusing, Thierry Herzog is always there in the event of a problem. And here comes “the president’s lawyer”. From the opening of the first Clearstream trial, in September 2009, the face-to-face meeting with Dominique de Villepin, was “violent”, according to The world (article for subscribers). For the former Prime Minister, it is “the relentlessness of a man, Nicolas Sarkozy”, which led him to the side of the defendants.

“I admired him a lot: he is a brilliant, tenacious opponent, hard to face. He is courageous, it is not so often at the bar”, remembers Luc Brossollet, one of Dominique de Villepin’s lawyers. But his plea stretches in length and the presiding judge begs him “dryly” to conclude. “I think I overestimated the file, I had worked too much “, recognizes Thierry Herzog in Release. “We can’t blame him: he didn’t want to leave anything in the dark”, retorts Luc Brossollet today, who obtains his client’s release, confirmed on appeal in 2011.

“When you’re in a business with Thierry, you know you’re going to have a good time”, says Francis Szpiner, he also a member of the closed circle of penalists. “We were at odds for five, six years, then we reconciled”, he confides. The dispute was political. Thierry Herzog and Francis Szpiner have been in the RPR since the first hour. But the first supports Nicolas Sarkozy, while the second swears by Jacques Chirac. “When the Chiraquians returned to the government, we spoke again”, reveals the one who is now mayor of the 16th arrondissement of Paris, elected in June under the LR label. “He is someone faithful to his friendships”, insists Francis Szpiner, who attended the same Parisian high school, at the foot of Montmartre. “He had the reputation of being rowdy, and, already, a devastating humor”, portrays the lawyer.

“Funny”, “a talent for mimicking scenes”... Humor is one of the personality traits put forward by the friends of Thierry Herzog. “We don’t understand anything about him if we don’t keep that in mind: he does things in the first and second degree”, summarizes Hervé Temime in Top secret (Gallimard, 2020). This other tenor of the bar will represent him throughout the trial which opens on Monday. Another old friend, with whom he set up his very first firm, in 1983, after a “friendly love at first sight”. At the time, the duo defended thugs. Thierry Herzog also forms a tandem with Pierre Haïk. His clients are members of the gang of hairpieces, UBS robbers and a few drug dealers.

Subsequently, he is the lawyer for the Tiberi couple, entangled in the affairs of HLM Paris and false voters of the 5th arrondissement of the capital. “He was more than a lawyer because we had personal links. I knew he was doing the maximum. He knew the case perfectly.”, testifies Jean Tiberi. Their families have known each other for several generations. That of Thierry Herzog, on the right, comes from the “petty bourgeoisie”. All these little people meet in La Baule, where we also meet the Sarkozy. Moreover, Thierry Herzog has never stopped working for his friend: after Clearstream, it is in the Bettencourt case that he defends him and obtains a dismissal in 2013.

“Nicolas Sarkozy is his client, his Secret garden”, according to Gilles-Jean Portejoie. “We have rarely spoken of him, he is a boy of real modesty”, details the Clermont-Ferrand Bar Council, who met him “on the tracks” in the late 1990s. He too “a professional love at first sight”, for a man “who embodies the world before”. “He is very attached to customs, ethics and courtesy”, he appreciates. Asked for this portrait, Thierry Herzog sent us a polite refusal: “very touched” by our request, he “do not wish” speak before the hearing.

He is one of the last big names in the French bar and there aren’t many.

“We have in common our style: we don’t like the eloquence of rupture, we are more in the seduction”, adds Me Portejoie. “I never heard nasty words about him”, he swears.

Despite everything, in the concert of praise, L’Obs found a dissonant voice. “Herzog is a specialist in hearing sound effects. He utters animal cries. The president inevitably interrupts the debates. Herzog then strikes with a disapproving air a colleague whom we do not like and whom we have appointed to advance “, loose to the weekly, in 2009, a lawyer on condition of anonymity. This confidence, “one of the best kept secrets of the Palace”, was not confirmed by our interlocutors.

On the side of certain magistrates, we are happy to be more critical – although Thierry Herzog’s sister is ex-vice-president of the Syndicat de la magistrature, classified on the left. “Thierry Herzog embodies all that there is in the great penalists, a ‘school’ in which I do not recognize justice … He yells, but apart from that?”, taunts with franceinfo Eric de Montgolfier, retired public prosecutor.

This kind of lawyer widens the gap with the magistrates.

The two men met in particular during the case of the rigged match of OM in Valenciennes, in 1993, then in 2008, for a business of “violation of the individual liberty” of a prisoner, in which Eric de Montgolfier was tried and then released. Today, the former prosecutor deplores that a lawyer was able to use with his client a cell phone bought under a false name (that of Paul Bismuth).

“Lawyers are not above the law”, considers Jean-Pierre Mignard. When the eavesdropping affair broke out in spring 2014, a petition was launched in support of Thierry Herzog, to denounce breach of the professional secrecy of black dresses. The lawyer and close friend of François Hollande, a member of the PS, retaliates with a counter-petition and declares in The JDD what “the professional secrecy of lawyers does not apply to the preparation or the commission of an offense”. Today, Jean-Pierre Mignard does not change anything from what he said, but claims not to have “of particular feeling” vis-à-vis his colleague on the opposite political side. “He will know how to defend himself” during his trial, he simply says.

For this, Thierry Herzog should be able to count, once again, on his friends, be it Nicolas Sarkozy or Hervé Temime. The latter announces it in his book: “I have come to the certainty that[‘il] should not be condemned and even that it should never have been tried. With President Paul-Albert Iweins, his first and main lawyer, we will present his defense in court with the absolute determination to demonstrate it. “