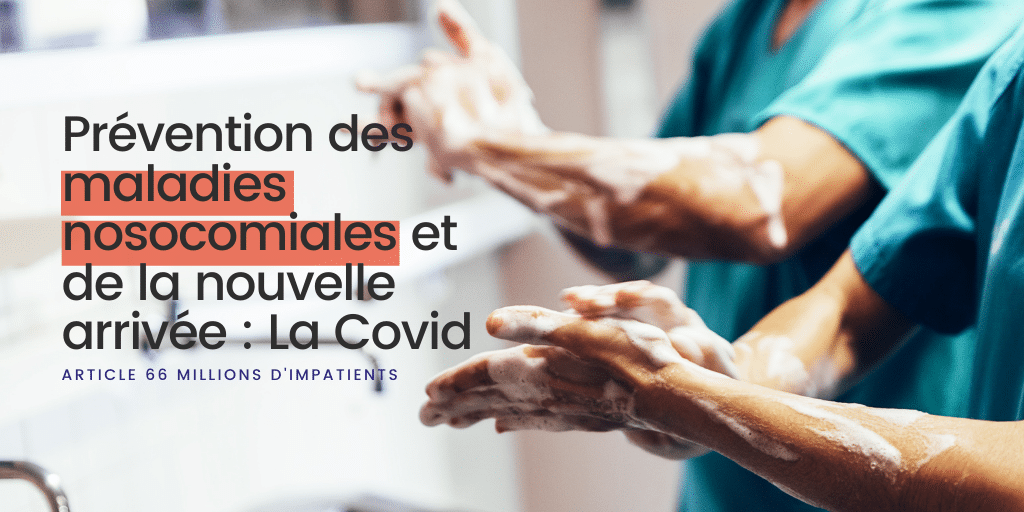 In France, around one in 20 people contract an infection while in hospital. This is called a nosocomial infection. Are considered as such, infections absent at the time of hospitalization of a patient, and which appear at least 48 hours after arrival. This represents around 750,000 * people infected per year, of which 4,000 are believed to die. The fact is that for a number of bacteria that cause these infections, antibiotic treatments unfortunately do not work. This is called antimicrobial resistance.

The fight against nosocomial diseases therefore has two major battles. The first is the particular attention paid to avoiding contamination, particularly from caregivers to patients, during hospital stays. The second is prevention around the proper use of antibiotics and prescribing “just what it takes, when it is needed”, in order to prevent bacteria from ending up by “resisting” them.

Let’s start by talking about the progress made in recent years in the prevention of nosocomial infections, and take stock of the latest one, with coronavirus SARS-CoV-2, which has reached a large number of patients in healthcare establishments for 18 months. .

Inventory and progress in terms of prevention of nosocomial diseases

The last National survey of the prevalence of nosocomial infections and anti-infectious treatments in health establishments, carried out from May-June 2017, shows that the percentage of infected patients has not decreased (4.98%), while previous surveys have shown a decrease in prevalence since 2001. ” We are making progress on some bacteria and having disappointing results on others. In the case of staphylococci which are very feared because they can lead to heavy bone and joint infections, we have succeeded in lowering the frequency of resistance of certain strains called MRSA, which are found in limited quantities on the skin or the digestive tract, in particular thanks to the improvement of hand hygiene. On the other hand, resistance to germs in the digestive tract has rather increased in recent years because they are more numerous and it is very difficult to control their transmission. The main cause of their emergence in the digestive microbiota is the misuse of antibiotics, which are valuable and useful but should be prescribed only if necessary. », Explains Doctor Pierre Parneix, Head of Support Center for the Prevention of Infections Associated with Care (CPIAS) of Nouvelle-Aquitaine and President of the French Society of Hospital Hygiene.

See also  Can we get vaccinated against Covid and seasonal flu on the same day?

How to improve the prevention of nosocomial diseases?

As we have just mentioned, one of the aspects to be improved is the fight against antibiotic resistance, in particular by reserving the consumption of antibiotics only to necessary cases. Indeed, when we take antibiotics, we bring out resistant germs since we eliminate all those who are sensitive. Resistance fighters therefore take their place and multiply.

Then there is an issue concerning the hygiene measures to be adopted in the hospital. There are several cases and it is important to understand that very often, the bacteria that cause infections are already present in the patient when he arrives at the hospital. During treatment, for example, they will migrate to a place in the body where they have no place, but where they develop and become pathogenic. This is the case with the most widespread bacteria responsible for infections in hospitals: Escherichia coli. Found naturally in the intestines, it can migrate and cause a urinary tract infection, especially when placing a urinary catheter. The problem is that this bacteria, however banal, can also prove to be resistant to antibiotics.

You can also be infected by germs carried by other patients, often carried by caregivers. This is more the case with highly resistant bacteria in the digestive tract, such as enterobacteria or enterococci for example. In these cases, it is necessary to keep these patients in isolation and to put in place more restrictive measures. However, we do not check whether patients are carriers of this type of bacteria each time they enter the hospital, but only in certain departments, such as intensive care units for example. This type of bacteria is more resistant to antibiotics but fortunately less common.

In addition, these bacteria can remain on door handles, faucets, etc. and switch from user to user. This is why it is essential for everyone, patients, visitors and staff of establishments, to wash their hands very regularly in the hospital.

« On the one hand, there is the organization of care by the personnel of health establishments, but we must not forget the hygiene of the patients themselves and of the visitors. In the midst of the Covid crisis, where hand hygiene campaigns were in full swing, it was measured that only 4 in 10 French people disinfect their hands correctly and regularly. At the hospital, in the rooms, we provide Paperbacks on this type of information and note that it arouses the interest of users. Adds Dr Parneix.

A little news among nosocomial diseases: The Covid

« In 2020, more than 130,000 people, patients, caregivers and visitors would have contracted Covid-19 in France in a health establishment. “, Estimates the association The link, by extrapolating the data from Public Health France, only collected on a third of the establishments. This is the case of Laetitia, 45, entered the hospital in February 2021 for an operation scheduled for kidney stones. She had scrupulously respected all the instructions and does not understand, even today, how she could have been contaminated in the hospital, while the organization of the establishment seemed to her rather flawless (find her testimony here). The problem is that despite all the precautions, despite the establishment of “Covid” sectors in hospitals, it was very difficult to compartmentalize everything for months in each establishment. This is all the more difficult given that anyone can be an asymptomatic carrier of the virus and that to avoid any cluster, staff, patients and visitors to establishments would have had to apply the strict and continuous barrier measures since the start of the disease. pandemic, also outside their workplace. However, Dr Parneix remains confident and wishes to reassure users about occasional visits and consultations at the hospital: “ If we respect barrier gestures, with good hand hygiene, wearing a mask, social distancing, there is very little risk of contamination when passing through the hospital. In addition, remember that the most effective protection, to lower the risk of contamination and limit severe forms of Covid, is vaccination. »

* Some of these infections require administrative notification to the Regional Health Agency, for the most serious and those with resistant bacteria for example, but we know that there is an under-declaration on the part of establishments.