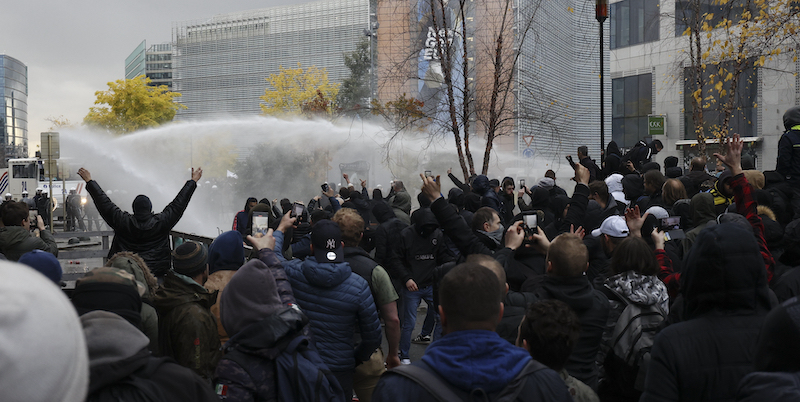 Over the weekend in various European countries there were large demonstrations to protest the restrictions imposed to counter the new wave of coronavirus infections. This type of protests is now quite common in Europe, but in many cases those of recent days have been much more participatory and violent than usual.

The largest demonstration was in Brussels, Belgium, where around 35,000 people marched to the headquarters of the European Commission. The protests started peacefully, but after some demonstrators threw objects at the police they reacted by using tear gas and fire hydrants to disperse the crowd.

The demonstration was organized after the Belgian government decided in recent days to tighten some restrictions to slow the spread of the virus. From Saturday, the obligation for all people over 10 years of age to wear a mask in public places indoors and outdoors where there is a large concentration of people (such as Christmas markets, for example) has returned. The government also recommended that all workers, whenever possible, work from home four days a week until mid-December.

The demonstrations in Brussels followed those that took place in the Netherlands on Friday and Saturday. On Friday there were violent clashes between demonstrators and police in Rotterdam: the first had set fire to some cars and threw stones at the policemen, who had reacted by using water jets and firing warning shots. Similar scenes were repeated in The Hague on the night between Saturday and Sunday, after peaceful protests were organized in various Dutch cities later in the day. In all, the police arrested 40 demonstrators.

The protests in the Netherlands had been organized due to the entry into force from November 13 of a sort of “partial lockdown”, albeit with far less stringent measures than the lockdowns imposed in the hardest months of the pandemic in much of the world. Bars, restaurants and hotels must close at 8pm and “non-essential” businesses at 6pm, sporting events must be held behind closed doors and visits to private homes are limited to a maximum of four people. However, cinemas and theaters may remain open. The government has also strongly advised to work from home whenever possible.

– Read also: All restrictions for the unvaccinated in Europe

Peaceful demonstrations also took place over the weekend in Italy, Croatia, the Czech Republic and Austria. On Saturday in particular, in Vienna, there was one in which some tens of thousands of people participated, to protest against the new lockdown in force since Monday 22 November: the new restrictions provide that one can leave the house only for reasons for work, for medical visits, for shopping, to go to the pharmacy or to do physical exercise. Except in exceptional cases, schools will resume distance learning.

VIDEO: Thousands gather in Vienna to protest against the new measures announced by the Austrian government to tackle the Covid-19 pandemic pic.twitter.com/mOketBgOmC

The new lockdown in Austria will last a minimum of ten days but can extend up to 20, then until 13 December: if necessary, it will last even longer for unvaccinated people. The Austrian government has also announced that it will make coronavirus vaccination mandatory, starting next February at the latest.

– Read also: Protests against the vaccine in Guadeloupe are a headache for France