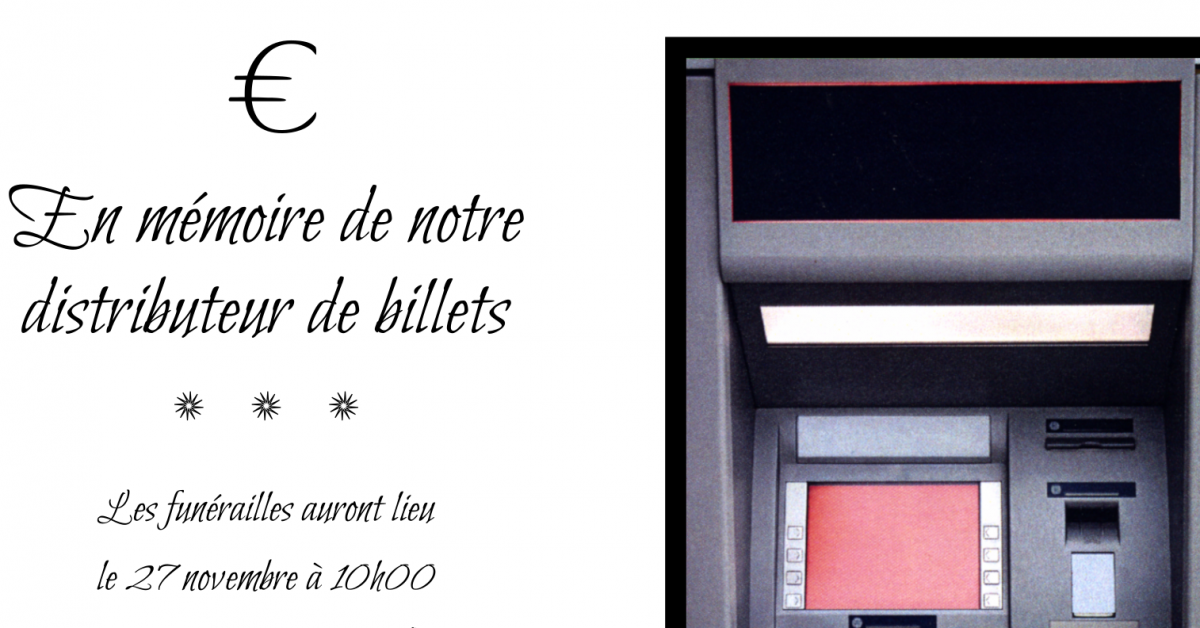 Saturday November 27 at 10 am on the Grand-Place Ath, several associations will show their opposition to the project to remove one in three cash dispensers by 2024. They claim the right of citizens to access their money.

“Members of the Ath en Transition, SolAToi (local citizen currency for the Ath region), Yar (local citizen currency of Tournaisis), Tout Autre Chose Pays Vert et Collines families, and their relatives from the Gasath solidarity purchasing groups, Gassines and Maffllourchette, as well as the towns in Transition of Beloeil, Lessines and Leuze, are deeply indignant to inform you of the death of a “Bank Note Distributor”. These associations have published a death announcement for the distributor of the Grand-Place of which they organize, symbolically, the funeral. One way of protesting against the gradual disappearance of distributors in Picardy Wallonia and elsewhere.

“The ceremony will take place this Saturday, November 27 from 10 am on the Grand-Place d’Ath in the greatest sound and is open to all consumer citizens concerned to demonstrate their attachment to the right to access their money. Occurring as a result of a rampant disease, fatal for one in three cash dispensers by 2024, the disappearance of this machine will leave many citizens orphaned from rapid access to cash ”, continue the organizers of this event.

>>>
The associations point the finger at the “Batopin” project

In order to manifest their opposition to this project and sensitize citizens to its negative impact, several associations will meet for the symbolic funeral of a “Banknote distributor”. “We invite all the people who do not want, once again, to suffer from the frog syndrome (but yes, you know, that poor frog who cooks and dies without realizing it, because we heat very gradually the water from the pot in which it was so well!), to come and join us on Saturday at 10 am on the Grand-Place d’Ath, say the organizers. Put on your best mourning clothes, take out your handkerchiefs and join us in mourning our dear endangered distributors. “

Saturday November 27 at 10 am, on the Grand-Place, in front of the Trattoria in Ath. More informations : www.solatoi.be Where https ://www.facebook.com/solatoimonnaielocale/