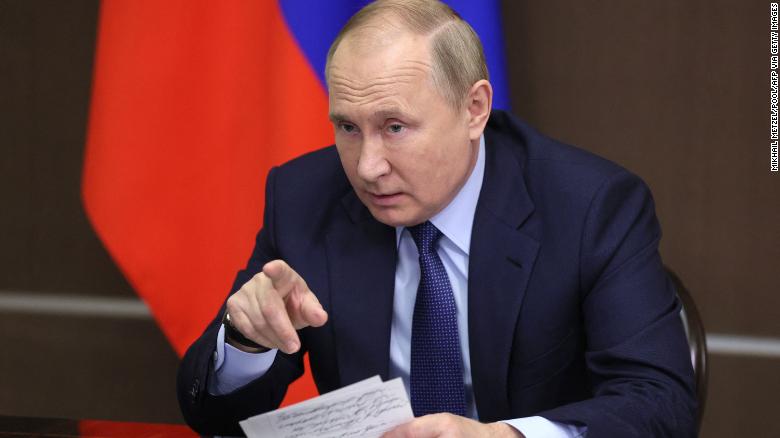 Russia at worst of pandemic despite Sputnik V 0:57

Moscow (CNN) – The President of Russia Vladimir Putin It tested an experimental nasal vaccine against COVID-19 that is not yet in the clinical trial phase, its fourth vaccination in total, it said Wednesday.

Putin also received a boost from Sputnik Light Russian-made on Sunday, six months after his second dose of Sputnik V.

After receiving the booster shot, Putin offered to participate in trials of the intranasal vaccine under development by the Gamaleya Center, the maker of Sputnik V and the subsequent single dose of Sputnik Light, he said in a televised meeting with members of the government. .

Putin said he “felt nothing” after the intranasal vaccination. “Today, after these two procedures, the injection and the nasal form, the second part, I already did sports this morning. So I can attest that everything evolves as our scientists say,” he told the ministers.

In mid-October, the Russian Ministry of Health approved clinical trials of a nasal spray form of the Sputnik V vaccine developed by the Gamaleya Center, according to RIA Novosti.

Gamaleya is still testing the efficacy of the nasal vaccine, according to Gamaleya deputy director Denis Logunov. “I must confess that this is an unofficial administration, basically, as usual, we are testing it on our employees,” Logunov told Putin in a televised conversation after administering the reinforcement on Sunday. Putin responded by asking Logunov if he could “participate in this experiment.”

Romania faces its fourth wave of covid-19 overwhelmed by disinformation 3:30

Logunov said the intranasal form was developed to “induce barrier immunity,” which in the case of COVID-19 “refers to our immune organs located in the nose and pharynx.”

See also  Who gets an ic bed and who has to die? | Inland

“We also know that vaccines administered parenterally, or intramuscular injection are effective, but have a limited ability to induce immunity against so-called post-vaccination infection and symptomatic disease. We need to administer the agent through the mucous membranes to induce immunity. barrier immunity “.

According to Logunov, the nasal vaccine “just needs a little finalization and then it will go into clinical testing, and after that, we certainly plan to start the rollout of the new vaccine.” It’s “comfortable, painless, and with an absolute minimum of side effects,” he said.

Russia has been left behind in much of the world in terms of vaccinating its population, despite being the first country in the world to approve a coronavirus vaccine, Sputnik V, for use in August 2020.

According to the latest figures available for October, 47.8 million Russians have received their first injection and 42.4 million are fully vaccinated in a country, which has a population of about 146 million inhabitants.

Russia has struggled to control the rise in coronavirus infections in recent weeks.

The country has recorded 262,733 deaths from covid-19, according to the latest figures from Johns Hopkins University.

– Anna Chernova reported from Moscow and Lindsay Isaac from London.