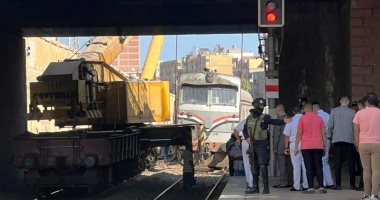 A short while ago, the Damanhour train station in Beheira witnessed the removal of the traces of the departure of two passenger train carriages on the Cairo-Alexandria line while the train entered the railway station this morning.

Informed sources confirmed that the Railway Authority used a work team and giant cranes from Tanta station to return the carriages to their tracks, and to repair the railway tracks and vehicles in the authority’s workshops in Alexandria, adding that transportation and internal buses were provided to transport citizens to their workplaces until the movement of trains returned to normal.

The sources indicated that a train coming from Cairo was stored at Itay El-Baroud station until the removal of the traces of the Damanhour station train incident.

The security services in the lake had received a report from the railway police stating that the tractor of the passenger train No. 774 and the first carriage of the train coming from Matrouh had left the railway tracks while entering Damanhour station.

Immediately, the security leaders moved to the scene of the incident. Inspection, it was found that my car had left the train from the tracks of the railway tracks, without causing any injuries.

The incident resulted in the suspension of trains on the Cairo-Alexandria line, and the train carriages are being returned to their normal position, and the movement of trains is back to their scheduled times.