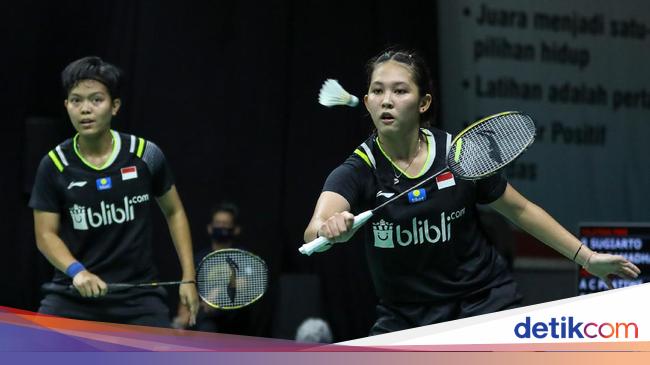 Indonesian women’s doubles Ribka Sugiarto/Siti Fadia Silva Ramdhanti pegged the medal target in 2022 Badminton World Championship. There is a special reason the coach gave the burden to both.

Rebekah is back in pairs with Fadia to welcome the championship at the Tokyo Metropolitan Gymnasium, Japan, which will take place from 22-28 August.

This is because the pair’s BWF ranking still occupies the highest position among active Indonesian women’s doubles, so they received an invitation from BWF.

PBSI finally decided to duet back the two for a while. Apart from Fadia/Ribka, there are other couples who can also appear in the championship, namely Febriana Dwi Puji Kusuma/Amalia Cahaya Pratiwi.

Even though they only returned specifically for the World Championships this time, the Indonesian Women’s Doubles Coach, Eng Hian, still imposed a target on Ribka/Fadia. The coach, who is affectionately called Koh Didi, also explained the reason. What’s that?

“For Rebekah/Fadia, they are more likely to achieve individual achievements. In the sense that Rebekah/Fadia are no longer a couple, now they still have the opportunity to play again in the World Championships, of course they want to make achievements,” said Eng Hian in a PBSI release.

“Even after this they are no longer together, but there is an honor for them to have excelled at this World Championship. So I want Ribka/Fadia to play to the best of their ability to win medals according to the women’s doubles target,” Eng Hian emphasized.

On the same occasion, Febriana Dwi Puji Kususma/Amalia Cahaya Pratiwi felt happy to face the senior level World Championship for the first time. Previously they had successfully won a silver medal at the 2019 World Junior Championships.

See also  Russian hope was poisoned. The Ski Tour will not go

“So far the preparations have been pretty good, we just have to keep it up. We are all prepared, especially since this is the first World Championship, but especially mentally,” said Tiwi.