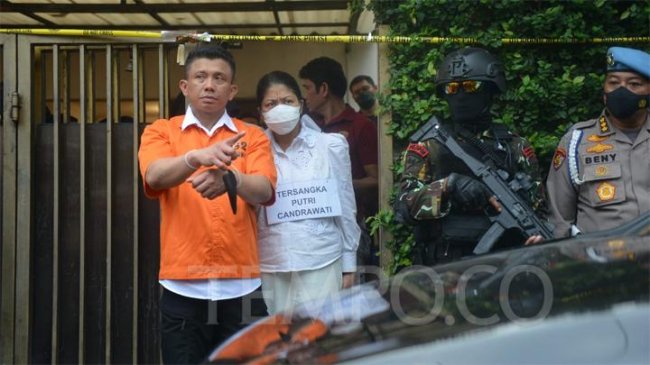 TEMPO.CO, Jakarta – The Network for Defending the Rights of Women Victims of Sexual Violence (JPHPKKS) issued 6 recommendations to the National Police and other state institutions related to a series of murder cases Brigadier J alias Nofriansyah Yosua Hutabarat. Among them they asked the police not to discriminate against victims of sexual harassment.

In a written statement, JPHPKKS stated that the case of Joshua’s murder, which was said to be motivated by the sexual harassment of Princess Candrawati, opened the veil of serious problems within the Indonesian National Police. According to them, Putri got such privileges as her report quickly rose to the investigation stage. In addition, the wife of the Inspector General Ferdy Sambo He was not detained despite his status as a suspect in a murder case.

Because of that, JPHPKKS asked the police to make improvements internally.

“The police will immediately make improvements internally, and stop discriminatory practices against victims of sexual violence so far, including discrimination in service and law enforcement based on social status,” wrote JPHPKKS in a press release received by Tempo, Saturday, September 10, 2022.

In their second recommendation, they asked that the case of Joshua’s murder be opened in a clear light. “Police must work in a professional and accountable manner,” they wrote.

Next, JPHPKKS highlighted the issue of state institutions which stated that there had been sexual harassment of women Princess Candrawathi. They asked the agency to consider all the facts, including Putri’s false report that sexual harassment occurred at Ferdy Sambo’s official residence and the power relationship between Putri and Joshua.

“In applying power relations analysis to reports of alleged sexual violence, it is necessary to consider which relationship factors are more dominant in PC’s relationship with Brigadier J in terms of social status, police structure and culture, all of these factors need to be considered,” they wrote.

Putri’s confession about sexual harassment, according to JPHPKKS, cannot be separated from the context of efforts to hinder law enforcement or obstruction of justice done by Sambo. According to them, the change in the location of sexual violence from Jakarta to Magelang needs to be suspected.

“With the previous precedent, it is possible that his latest confession as a victim of rape at the Magelang TKP will be obstruction of justice the second volume, after the first failed, to cover up the real motive behind the killing of Brigadier J,” said the network, which includes the Center for Law and Policy Studies.

JPHPKKS did not mention the state institution in question. However, based on Tempo’s investigation, there were two institutions which stated that there was an allegation of sexual harassment against Putri, namely Komnas HAM and Komnas Perempuan.

Independent experts and affirmative policies are needed for women

Therefore, they believe that the National Police must bring in independent experts. This needs to be done to prevent repeated attempts obstruction of justice.

Finally, JPHPKKS assesses the need for an affirmation policy for women with special situations who are in conflict with the law. “For example, female prisoners who have toddlers, let alone breastfeeding, need to consider their reproductive role,” they said.

To date, the police have not detained Putri Candrawati for humanitarian reasons. The Head of the Public Relations Division of the National Police, Inspector General Dedi Prasetyo, stated that investigators were considering Putri’s condition, who still has a toddler.

The issue of alleged sexual violence against Putri is still controversial. The latest Brigadier Ricky Rizal Wibowo stated that Brigadier J did not forcibly enter Putri’s room at the Magelang house. This was stated by Ricky’s lawyer, Erman Umar, last Thursday.

Baca: Bripka Ricky Rizal Reveals New Facts about the incident in Magelang, Brigadier J did not enter by force into Putri Candrawati’s room