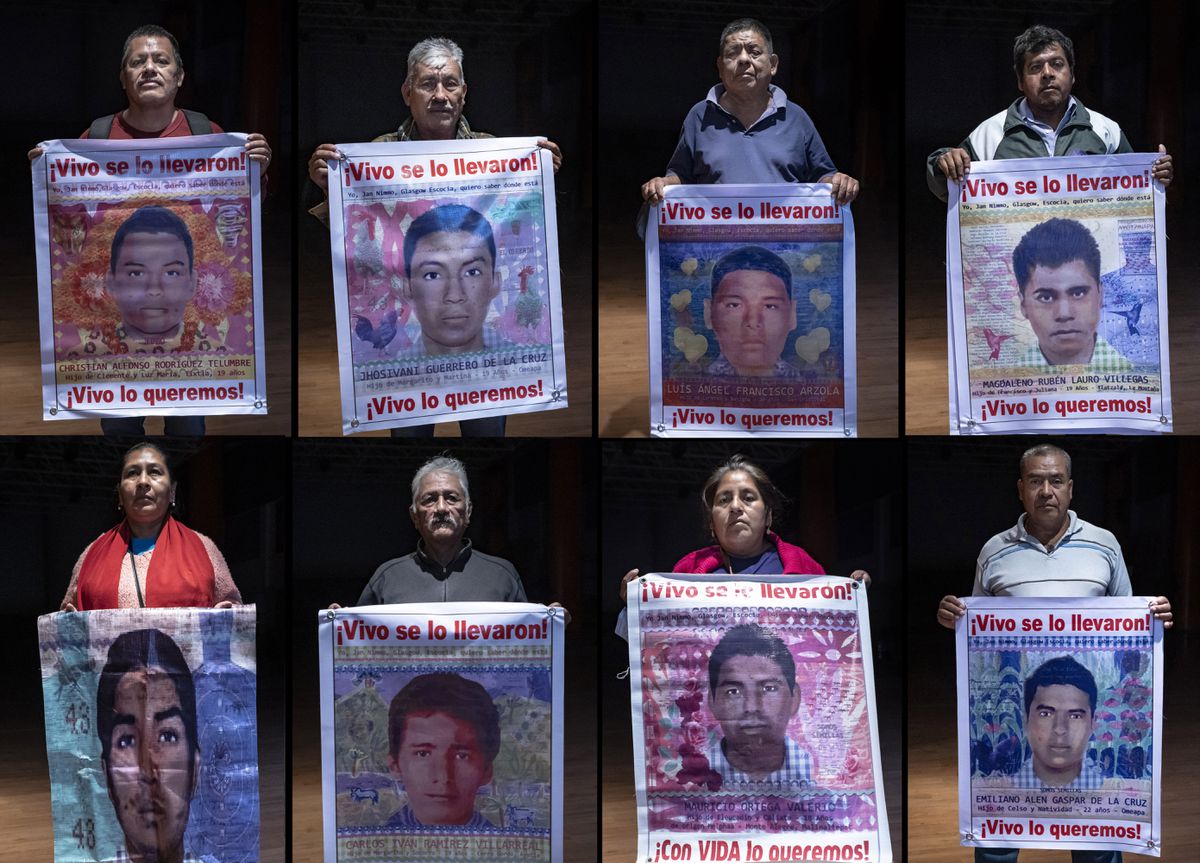 “My name is María de Jesús Tlatempa Bello, mother of José Eduardo Bartolo Tlatempa, who disappeared on September 26, 2014 in Iguala. We continue to fight because seven years have passed and to this day the facts have not been clarified. We have not been able to see them. Not hugging. Nor talk with them. We don’t know how or where they are. All we want is to see our children ”.

He says it like that, on a run, without breathing, as soon as the recorder is turned on, like someone who is used to telling it over and over again. Seven is many years to spend repeating to the press how they took your son. Because José Eduardo Bartolo Tlatempa is one of the 43 students from the Raúl Isidro Burgos Rural Normal School in Ayotzinapa, disappeared by the Guerreros Unidos criminal organization and the police, during the night of September 26 and early morning of September 27, 2014, in Iguala , in the State of Guerrero.

His eyes are moistened gently, discreetly, like someone who is used to it: “We are on the surface. We cannot sleep, we lose sleep thinking about how our children will be, where they will be ”. Next to him, sitting in a brown armchair, is Calista Valerio Galiana, who, while her partner speaks, takes refuge behind a canvas with the face of her son, Mauricio Ortega Valerio, another of the disappeared normalistas. He runs his hand through his hair. Look through the window.

Both are in a spacious living room of the Miguel Agustín Pro Juárez Human Rights Center (Prodh), in Mexico City, where they have slept these days. On a table there is a coffee pot, cardboard cups, sugars, plastic spoons. But nobody drinks. They have come with the rest of the parents of the victims like every year. On Thursday they protested at the headquarters of the Prosecutor’s Office to demand the answers that no one has given them yet. On Friday they met with the president, Andrés Manuel López Obrador, who this month publicly admitted as a failure that he had not discovered the truth about the case of the Ayotzinapa students. It is not the first meeting that the relatives have with the president.

“Every time we come here they tell us the same thing,” Valerio Galiana complains. “When we got home his brothers asked me ‘what happened, what did they tell you?’ And I say nothing. It makes me sad because they don’t tell us the truth ”, she continues, as she becomes tiny in her armchair. Four of the parents have already died, before they could find their children. Many have somatized so much pain and have ended up developing diseases.

Melitón Ortega, Mauricio Ortega Valerio’s uncle and president of the collective Fathers and Mothers of Ayotzinapa, leaning against a wall of the Prodh Center decorated with murals of revolutionary leaders, he clarifies: “That the president assures us of his commitment to us is of the utmost importance, but we know that there are institutions that put obstacles in the way. If not, they would have already appeared. We feel that they are creating times for us to forget ”.

A group of seven parents return to the Prodh Center at nightfall, loaded with canvases recently printed with the faces of their children, ready for the demonstration that they will carry out on Sunday. They pose with them unfolded for a photo. “Say whiskey” jokes one with the partner who is being portrayed at that time. Among them, Francisco Lauro, a peasant, short, with tough features, who walks with his head lowered, crowned by a cap, jeans, a shirt and a green tracksuit jacket. He is convinced that his son is still alive, kidnapped at the top of a hill by the drug trafficker. “From 2014 to 2016 I dreamed that my son would return. But just as from the back, I never saw his face. I said ‘mijo, you are here’. He replied ‘don’t worry, I’m going to retire, they just gave me a little while’. And he was leaving. But from 2016 to here I no longer dream of him ”.

The night of his disappearance, the normalistas were in Iguala to take several buses and be able to reach Mexico City, to the demonstration that takes place on October 2 in commemoration of the 1968 Tlatelolco massacre. But they were intercepted by elements of the police and organized crime. They were never heard from again. Only three of the students have been identified so far: Jhosivani warrior this year; Christian Rodríguez in 2020 and Alexander Mora in 2014. Although the investigation showed that Mora’s remains were placed a posteriori, to reinforce the official version of the former attorney general of the republic, Jesús Murillo Karam, and the former head of the investigation, Tomás Zerón —Today a fugitive in Israel, pending extradition—, who argued that they had been cremated in the Cocula garbage dump and then thrown their bones into a river.

Cristina Bautista has earrings with the number 43 and a hand-embroidered cloth with the face of her son, Benjamin Ascensio Bautista, and the inscription “I will move mountains to find you.” Speak without emotion, mechanics. “Before, I couldn’t give interviews, I would cry. Now I speak with the courage I feel ”, he justifies himself. “Our life changed a lot. We sowed corn, we made bread. We were so happy. But on September 26, 2014 our martyrdom began. They thought that since we are peasant parents it would be easy to deceive us, but they were wrong ”.

Bautista explains that people often criticize them. “They tell us to stop, that our children are already dead. How dare they say that we forget about our children? Estanislao Mendoza, another father, adds: “We don’t want to walk in the streets screaming. They are forcing us to do this. “

Melitón Ortega considers that there is a smear campaign against the Rural Normal Schools —which are located in humble areas, often indigenous communities—, such as that of Ayotzinapa: “La Normal has a history of social struggle, and they were drowning it. Two students were killed in 2011. They ran a campaign against us. And the final blow: September 26, the disappearances. They thought that with that we were going to disappear, but it was the opposite. Many students continue to go to normal, and that for us is very important, so that they get out of poverty and have a different life from ours ”.

And then he pauses for a long time. Sighs. And he adds that motto that is already part of the collective imagination of the last decades in Latin America: “They were taken alive and we want them alive.” Seven years later, the silences, the uncertainties, the official versions continue. That song by Alfredo Zitarrosa already said: there are forgetfulness that burn and memories that magnify.