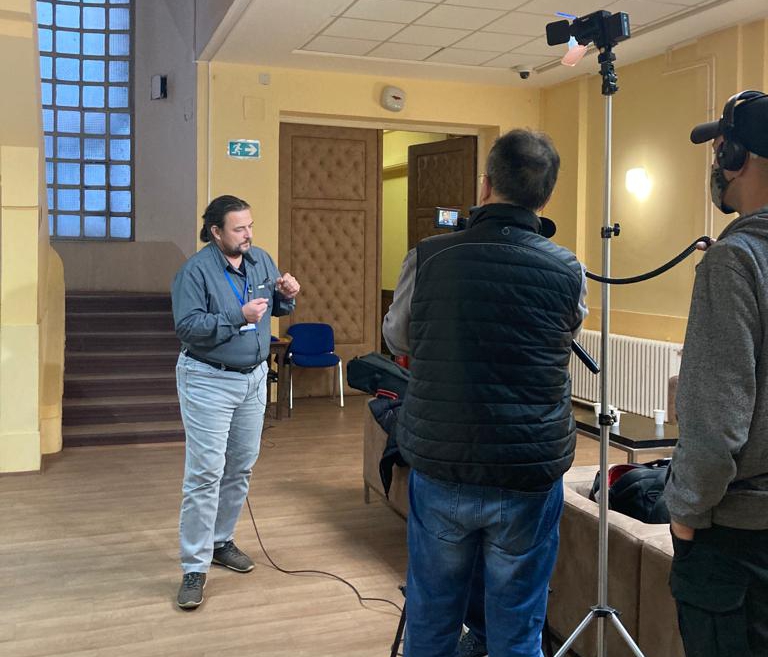 The 67th International Composers’ Competition closed with a press conference in the Serbian capital Belgrade on the evening of 15 October Rostrum, in which In the group of young composers under the age of 30, the main prize went to composer Krists Auznieks for composition Are One.

Classical music radio stations from all over the world take part in this competition, offering a recording of a contemporary music composition from their country.

On the evening of October 15, a representative of Latvian Radio – Signe Lagzdiņa, the program manager of LR3 “Klasika” – announced this happy event in a telephone interview from Belgrade, offering a broader overview of the competition on October 19 and 20.

This half hour we have a conversation with one of the most experienced radio delegates Rostrum in the competition from Slovenia – a representative of Slovenian Radio Gregor Pirschwho Rostrum has been involved for more than 20 years. Recall that the previous Rostrum in a series with the work of Petra Strahovnik Prana Slovenia won the main prize for the orchestra. (In turn, there will be a conversation with BBC Radio 3 and Anna McKay, producers of the BBC Symphony Orchestra.)

But let’s start with the recordings from the press conference.

At the press conference, everyone was addressed by the Secretary General of the International Music Council Silja Fischer, revealing the history of this competition.

International composers’ competition Rostrum In 1954, with the support of the International Music Council, four radio stations were founded. This council is the world’s largest network of music organizations. The mission of the Music Council is to offer access to music to everyone.

International composers’ competition Rostrum For the last almost seven decades, the world’s radio stations have been united to share and support the spread of contemporary music, to promote it, but it is also an exchange platform for radio program managers to exchange experiences. The new compositions are offered the largest possible volume in cooperation with the European Broadcasting Organization or EBU. For example, works presented at the previous Rostrum in 2019 in Bariloche, Argentina, were broadcast 700 times on radio stations in all Member States and elsewhere. During these almost seventy years, the world’s best-known and most talented composers, while still young and little-known, such as Luigi Nono, made their first international success in the international composers’ competition. Rostrum.

Question – Why is the International Music Council involved in this project? This is very much in line with the core values ​​represented by the Music Council and are defined in the five music rights. Firstly, it is the right of all children and adults to express themselves freely musically. Secondly, they have the right to learn musical languages ​​and skills. Thirdly, to have access to musically engage, to listen, to participate, to create and to learn, fourthly, to have the right of all musicians to develop art and to communicate freely and with appropriate technical support, and sixthly, to have a fair appreciation and reward for their work. .

See also  Cuban auditions in Nuestra Belleza Latina with the message of "Homeland, Life and Freedom" on her clothes

He won the main prize this year Ivan Ogđanović ar opusu Lonesome Skyscraper (“The Lonely Skyscraper”), which premiered in Portugal. In the category up to 30 years, the main prize was awarded to Latvian representative Krists Auznieks for composition Are One.

And now – a conversation with a representative of Slovenian Radio Gregor Pirschwho Rostrum has been a delegate for more than 20 years.

Signe Lagzdiņa: What are your thoughts on this year?

Before we met in Belgrade, I was a little worried about what this year would look like, as the coronavir had hit several countries that had already taken part in the past. Rostrum, and this year it was not. It is a bit scary – we did not see Argentina, Ireland, Taiwan, Australia, Canada this year – these are strong countries that have always offered good work. I thought to myself that this Rostrum will be very local. But now that the competition is over, I don’t feel the difference. It seemed very global and we did our best, even more so. For example, all meetings of the EBU are still held online, but we had the opportunity to exchange thoughts and ideas in person. Yes, we are in a bit of a threatening situation, but we hope that we will all survive.

This is a strong gesture from the International Music Council, because we want to continue, despite the fact that last year Rostrum was canceled.

See also  In the Czech Republic, 247 more were infected on Wednesday, and four people died

Can you reveal your impressions of winning the main category?

This is a very polite work – especially the end of the piece was crucial for me personally. This is very static work and it is, of course, nothing new. But

I got the feeling that composer Ivana is a very musical, creative, deep person. If you listen carefully to the work, you can notice that the composer is in the depths of his hands – in the depths of experience, philosophical reflection. It is also something very typical of Serbian composers, and generally a very well done job. I have to admit that this was not my first choice, because I am trying to be objective, but I am very glad that Serbia won the prize in the main category.

In my opinion, this is one of the best jobs that Serbia has ever offered. Of course, this is also good support for the Serbs, who organized Rostrum for the first time this year, and they did it perfectly. Serbs are famous for their open hearts and kindness, and we were able to test them with our own eyes.

And what would be your comment about the Latvian composition – Krista Auznieka Are One?

We relatively listened to the Latvian composition at the very beginning. In my remarks, I wrote: very good, interesting. It was a mystery to me. In the end, after listening to everything, I asked myself, had I really appreciated this work? Do I really think so, or am I really fascinated by this vocal manner of pop music? I needed to listen to the piece again, and when I did, I was sure it was a really great job. Why? The composer walks on thin ice – just a few millimeters more, and then it could turn into kitsch. Of course, I do not want to speculate. This is exactly what I talked to with the Portuguese composer Luis Tinoko. In my opinion, the artistic position in this work is strong, and it makes me ask how far this form – the symphonic song – has come. For me, this is a general question: how to use vocal and symphony orchestra in contemporary opera, concert work? If you look at it, then even avant-garde composers have allowed or stayed in baroque singing in their works.

In Krista Auznieks’ work, I am very addressed by the way the vocals fit into the score of a very complex and paternal orchestra. Brilliant! As a composer, I am very sensitive when it comes to melody, and in this composition it is done very elegantly.

Elegance, I think, is very important here. It is not the avant-garde or the revolution that prevails here, but rather evolution, and it is even stronger.

Perhaps my only objection – and I know my Portuguese colleague agrees – is the length of the piece. Thirty minutes of one-piece work seems pretty much to my taste. Anyway, both times when I listened to this work, I enjoyed it and actually expected this work to win in the main category as well.