Report from the Maduro regime: Venezuela is approaching 65,000 coronavirus infections

Venezuela detected in the last 24 hours 868 new infections of COVID-19 as total cases amounted to 64,284The Executive Vice President of the Caribbean country, Delcy Rodríguez, reported this Thursday.

“In the last 24 hours, 824 community cases and 44 imported cases were confirmed, for a total of 868 new infections”Rodríguez said on his Twitter account.

The Venezuelan capital, Caracas was once again the region with the most new cases reported with 193, followed by the central state of Miranda, where 129 infections were detected.

The “imported cases”, as the Nicolás Maduro regime calls the migrants who return due to the crisis that caused the pandemic in the countries of the region, came from Colombia and entered through the passages of the western states of Apure, Táchira and Zulia with this nation, Rodríguez added.

Likewise, the Venezuelan official reported the death of another 9 people from causes related to COVID-19, bringing the total number of deaths to 520. 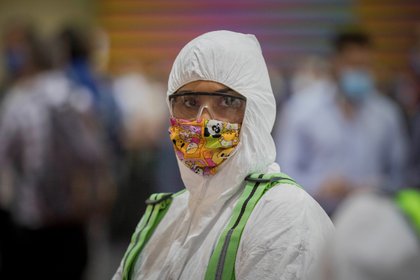 
Rodríguez also said that 82% of those infected overcame the infection, and that the country registers only 11,200 active cases, all admitted to hospitals and private clinics.

The Venezuelan president, Nicolás Maduro, said on Sunday that infections, located in an average of 1,000 daily, are controlled, while predicting that they would begin to decrease at the end of the month.

However, The Academy of Physical, Mathematical and Natural Sciences warned this week that the pandemic could get worse in the coming months with 14,000 daily infections in case the contagion rate is not “significantly” reduced in the following weeks.

The regime has assured in recent days that is preparing the return to normality and therefore has supervised the implementation of protocols to avoid contagion in land and airport terminals, as well as in public spas.

Venezuela completed six months of confinement this Wednesday, one week is strict and the next is flexible. Throughout this half year the national currency has devalued almost 80% against the US dollar, with which most of the operations in the country are completed.

Four Corners Brewery is turning its parking lot into a drive-in movie theater this weekend at a no-cost event...
Read more

The Governor of Buenos Aires, Axel Kicillof He December 1st the summer season will begin in the province...
Read more

iPhone 12 vs. iPhone XR: is it time to change your cell phone?

Apple has presented its new line of mobiles iPhone and has shown four models in one fell swoop, offering...
Read more

Text and Photography: Mi Gente Magazine Within the framework of the Step...
Read more

Crisis in Venezuela: there are already 86,289 cases of coronavirus and 731 deaths

In the context of the International Day against the...
Read more
News

In dialogue with 6AM Hoy por Hoy from Caracol...
Read more

Libra becomes a “multiple currency” which will include...
Read more

Strong minus in gambling and sports betting

Image: NintendoNintendo's official launch schedule may be a bit short, but at...
Read more
Archynewsyarchynewsy.com