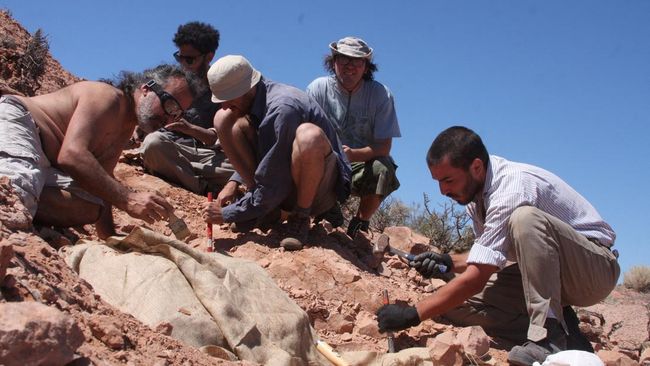 The newly discovered species, Jakapil kaniukura, lived between 97 million and 94 million years ago, as quoted from Live Science. The discovery confirms that an entire line of armored dinosaurs lived in the Southern Hemisphere, paleontologists report in a new study.

Jakapil kaniukura weighs about the same as a domestic cat. Its body is covered with protective spines that stretch from its neck to its tail.

This type of mini dinosaur is estimated to grow to about 1.5 meters in length. Jakapil kaniukura were plant-eaters, with leaf-shaped teeth similar to those of Stegosaurus.

Paleontologists at the Félix de Azara Foundation for Natural History in Argentina found a partial skeleton of a sub-adult kaniukur Jakapil in the province of Río Negro in northern Patagonia. The dinosaur probably walked upright and had a short beak capable of a strong bite. Experts predict these ‘vegan dinosaurs’ could also eat tough woody vegetation, according to a report published in the journal Nature Reports.

Jacapil kaniukura belonged to the same group as Stegosaurus, Ankylosaurus, and other ‘armored’ dinosaurs in a group called Thyreophora. Most thyreophorans are known to come from the Northern Hemisphere, and fossils of the earliest members of this group are mostly found in Jurassic period rocks from North America and Europe from about 201 million years ago to 163 million years ago.

You can see what J. kaniukura looked like when he was alive, thanks to this computer simulation from Gabriel Díaz Yantén, a Chilean paleoartist and student of paleontology at the Río Negro National University.