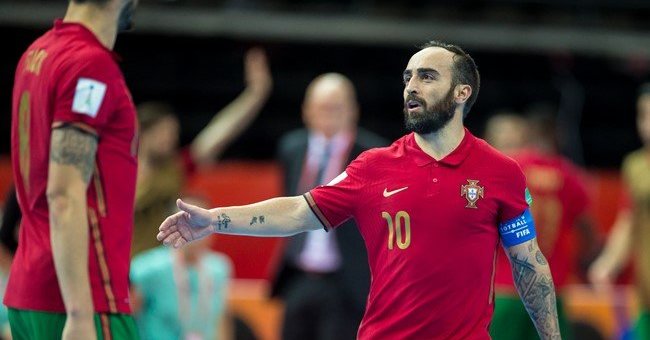 Let’s call him disobedient, but after 30 years, Ricardinho is still playing with a small, heavy ball. But oranges are now safely placed in a fruit basket – futsal balls are what they are „O Magico“ uses the fruits of many years of hard work in sports. But one fruit is missing.

Ricardinho was voted the best player in the world six times, and in 2018 he managed to win the title of European champion with Portugal, which made his parents cry for tears of joy. However, one thing is still missing in the trophy cabinet – the FIFA World Hall Football Champions Cup.

Sitting at a hotel in the center of Kaunas, Ricardinho FIFA.com told about his mission to win trophies in Lithuania.

– Portugal has won the last European Championship and the Portuguese club is the UEFA Football Champions League Cup. Do you feel more pressure to win as a result?

– I think the pressure is always good. It is a sign that you have achieved something – with that comes new responsibilities. However, I always say that the main competitors are those who have once won the championship: Argentina, Brazil and Spain. We are contenders who want to win. We try to work hard without burden on our shoulders, towards the goal to go step by step.

– What is Portugal’s goal in the championship in Lithuania?

– We came here with the goal of performing better than in the previous championship. Then we finished in fourth place. Our goal is to go beyond that. It’s not easy because it also depends on how the spells fall. Now we have a duel with Spain – it will be a repeat of the European Championship final.

– Who are your biggest competitors?

– I would say these are two teams that have won a lot. One of them is Argentina, which won as a team. Another in terms of individual craftsmanship is Brazil. She has a lot of talent. It is difficult to choose from them.

– How important is individual talent to winning trophies?

– Individual talent can win matches often. But to win leagues, titles like a world or European championship, you need more than just talent. Futsale is a lot of physical things, tactics. There is a lack of ingenious players these days who can decide the outcome of a match. More often than not, we see that defenses win leagues and tournaments. It’s getting harder for creative players.

– What would it mean for you to win the World Cup?

– It would mean a nice last chord, to win trophies, which I do not have. This would be the ideal end to my international career.

– If we go back to the beginning of our career, did you play with oranges instead of balls?

– (Laughs – ed.) I played with a lot of fruit! My dad worked at a fruit market and brought a lot of fruit home. Financial conditions were not good, had to adjust. I played with rolled socks, oranges, trying to dribble, do different things. I was beating oranges like balls – and I could knock them out many times. Unfortunately, sometimes oranges spilled out on the wall and my parents didn’t rejoice.

– Do you think what would have happened if you had pursued a career in football?

– (Laughs – ed.) We can dream a lot, think about different things. But from the moment I decided that futsal would be my life, I left football dreams aside. Maybe I would have been an amazing player, and maybe an ordinary player. However, I am grateful to have chosen the futsal.

– How much has the futsal changed since your first World Cup in 2008?

– Very, very, very much. The transformation is huge. Futsal is much faster, more physical, more tactical. More balance between the teams. There was a big difference then between Brazil, Spain, Russia and others. There were a lot of results with a big difference. I hope the futsal will continue to evolve.

– What do you think of the player who was the best in the world before you – Falcao?

– Falcao – my ideal. It has always been my ideal, it has always been an example to me. I always wondered how to reach his level. I am very pleased that in some respects it has been surpassed. Others failed, but most importantly, we all write our story on the futsal. I believe Falcao will always be one of the best players of all time. I was also able to write a nice page in the history of football.

– I do not think that is possible. It’s like records – Pele scored 77 goals (for the Brazilian national team), but played fewer matches. Today, players are playing more matches, making it easier to score more goals, improving records.

Falcao never played outside Brazil. Manoel Tobias played in Brazil and Spain. I played in Japan, Russia, Spain. I think everyone was an ideal in their leagues, their national teams. I think we were heroes of our era.

Already today, the Portuguese national team will meet the Spanish national team in an impressive Pyrenees peninsula derby and in the repetition of the 2018 European Championship final. This will be the last match of the championship in Vilnius arena, and it will start at 5.30 pm.